Nathan Rojas, 23, lives in Georgia, United States and drives daily from his parents’ home to his job. Rising gas prices this year have made his commute a struggle.

“Not everybody can work from home,” Rojas said. “Gas isn’t a privilege, it’s a necessity.”

At the grocery store, Rojas said his family buy half the meat they did a year ago because food prices have risen so steeply.

Rojas voted early Wednesday at the Putnam County Board of Elections in Eatonton, Georgia, which residents in his county can do between October 17 and November 4. He said he switched from the candidate his sister advised him to vote for to one he thought could help temper inflation and lower taxes for the less wealthy.

Crucial midterm elections due in the US on November 8 – when voters decide if Democrats or Republicans will control the US House of Representatives or Senate – come at a time when inflation in the country is running rampant. The Federal Reserve has hiked interest rates to the highest levels since early 2008, making the economy a pressing poll issue alongside vital concerns like women’s reproductive rights and access to voting.

A Pew Research poll conducted in mid-October determined that the economy is top of mind for 79 percent of voters. Among these respondents, Republicans outnumbered Democrats. The cost of food, gas and housing, respectively, are the three most concerning economic issues, according to poll respondents.

The effect of increasing grocery prices can be seen at food pantries, according to Alicia Harrison, the program director for MEND, an interfaith network of 22 food pantries throughout Essex County, New Jersey.

“There continues to be a tremendous amount of need,” said Harrison. “Not only have the pantries not seen a decrease, they’ve actually seen an increase over the last few months. They’re seeing new clients every week.”

She attributed this increase to people who had depleted their financial savings since the pandemic and the end of the eviction moratorium that had been in place during the pandemic, as well as the rising prices. “For a lot of these people, every incremental increase means they have to decide what they’re buying. It’s a big struggle.”

US food prices rose 11.4 percent between August 2021 and August 2022, according to data in the latest Consumer Price Index from the Bureau of Labor Statistics.

According to economic data released on October 27 by the Department of Commerce, the US economy grew in the third quarter after two quarters of shrinkage. The growth was fuelled by consumer and government spending, both federal and state, as well as local, according to the data. 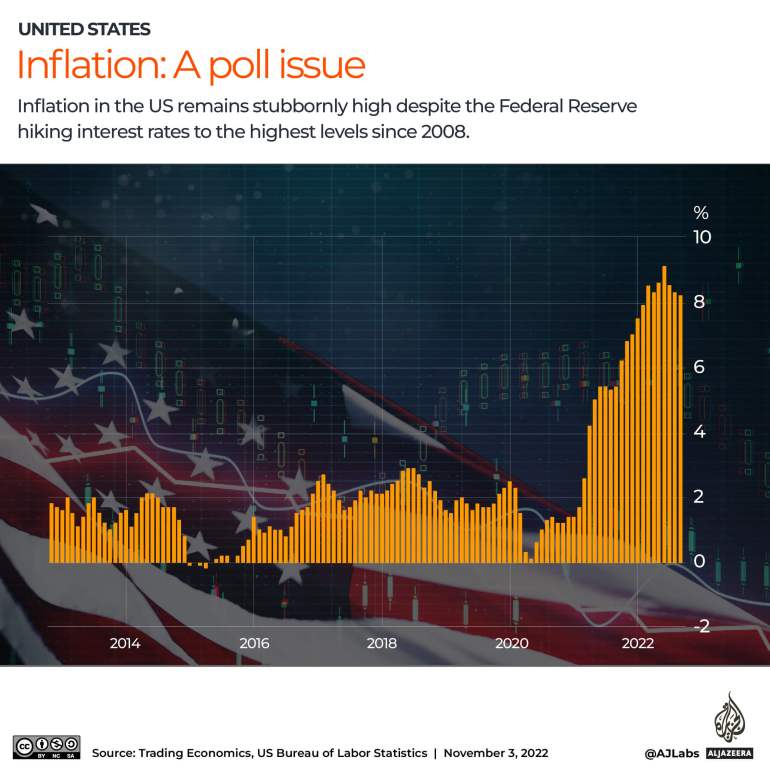 Vote for a ‘functioning democracy’

But for many US voters, the economy cannot take precedence over other pressing social issues. According to the same Pew Research poll, nearly 70 percent of respondents said “the future of democracy in the country” was their guiding concern and more of them were voting for a Democratic candidate over a Republican.

That includes Corporate Communications Executive Morgan Baden of Maplewood, New Jersey. “Economics absolutely don’t matter when democracy itself is on the ballot,” said Baden, who is also a young-adult author. “Like most people, inflation is a concern for me and I see the difference in pricing and the corresponding supply chain issues every day. But that’s the case across the globe, not just in the US, and it’s a shame certain politicians are trying to blame the current administration for something that’s clearly a global issue. I hope American voters can see through that.”

For many voters who are immigrants, how candidates talk about — and plan to support — immigrant communities is vital.

Basma Alawee, 36, of Jacksonville, Florida, said she will vote only for local candidates who recognise the value of immigrant workers in an area where many hiring managers say they cannot find applicants.  “We have not been seeing good policy locally toward taking out the barriers when immigrants apply for jobs,” Alawee said.

Laila Martin, 36, a resident of Harrisburg, Pennsylvania, said she is “looking for champions” of the immigrant community when she votes. Martin recently became a US citizen and this is her first time voting here.

Journalist and Democratic commentator Terry Blount said on Twitter that “the people who were voting about the economy were always going to vote” but that the midterms were going to see many first-time voters concerned about “their rights…being taken away”. Blount suggested Roe v Wade, gun violence and Medicare were bigger concerns for those new voters than the economy. 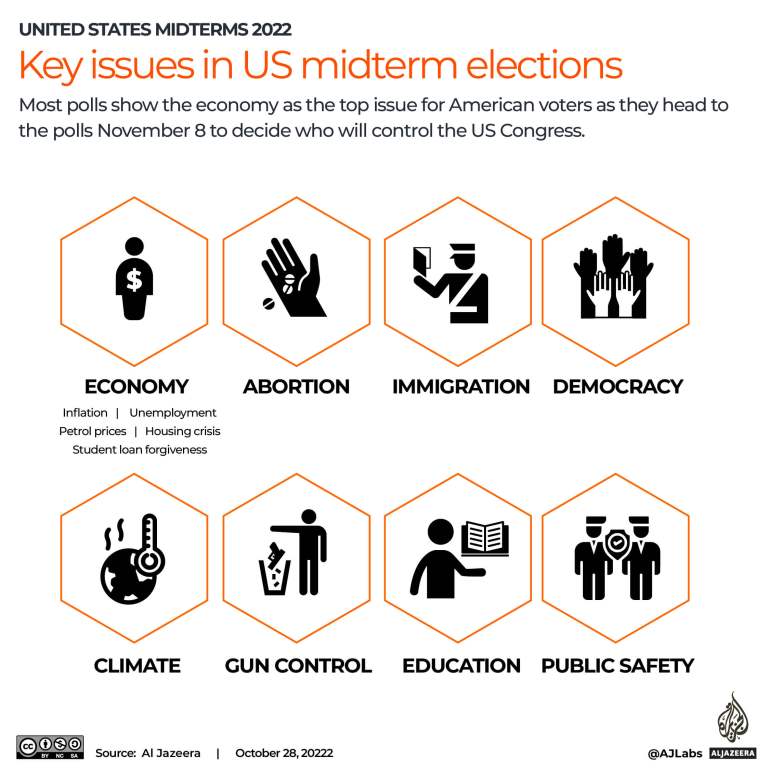 A survey of 1,000 Black voters conducted by KFF/TheGrio found that 28 percent who said they were more likely to vote in the 2022 midterms than they had been to vote in previous elections were driven by the desire to vote Republicans out of office. Nearly three-quarters of those polled said the economy would drive their midterm votes, with 81 percent saying they felt the economy was stacked against Black people.

Glynda Carr, the co-founder and president of Higher Heights for America, a PAC that supports Black female candidates for political office, wrote on Twitter: “While we know the economy weighs heavily on the minds of Black voters this midterm, we know that the economy cannot be separated from key issues like voting rights and criminal justice reform.”

Meanwhile, two-thirds of college students polled by online-learning platform Course Hero said inflation was driving their vote. Sixty-six percent of those planning to vote for Democrats said student loan forgiveness, as well as the cost of college and student loans, would influence their vote, while inflation and the rising cost of rent, gas and groceries was a driving force for 73 percent of Republican students.

Jackie Smith, 25, of Sacramento, California, said contrary to what older generations believe, it is not Starbucks and avocado toast keeping her bank balance low. Smith took out $60,000 in student loans to attend graduate school after receiving a full-ride scholarship to her undergraduate university. “I definitely will be voting for candidates who understand that this is an issue,” she said. Her graduate degree made it possible for her to get a better job but she said the debt will make it “very difficult to buy a house, get married, [or] make some long-term financial decisions like having kids”.

Nejra Sumic, 35, of Phoenix, Arizona, said she is voting for local and state candidates who support Proposition 308, which would allow undocumented immigrants to pay the same in-state tuition to Arizona universities as students who are citizens.

“These midterms can make or break the next generation of college students,” said Smith.