Gunmen have opened fire at a Russian military training ground near Ukraine, killing at least 11 people and wounding 15 others, according to Russia’s Ministry of Defence.

The ministry said the “terrorist” attack took place on Saturday in the southwestern Belgorod region that borders Ukraine.

It said the two assailants – nationals from an unspecified former Soviet republic – fired on volunteer soldiers during target practice and were killed by return fire.

The governor of Belgorod region, Vyacheslav Gladkov, said no local residents were among those killed or wounded.

The shooting comes amid a hasty mobilisation ordered by President Vladimir Putin to beef up Russian forces in Ukraine – a move that triggered protests and caused hundreds of thousands to flee Russia. It also comes a week after a blast damaged a bridge in Crimea, the peninsula annexed by Russia from Ukraine in 2014.

“During a firearms training session with individuals who voluntarily expressed a desire to participate in the special military operation (against Ukraine), the terrorists opened fire with small arms on the personnel of the unit,” the defence ministry statement said. 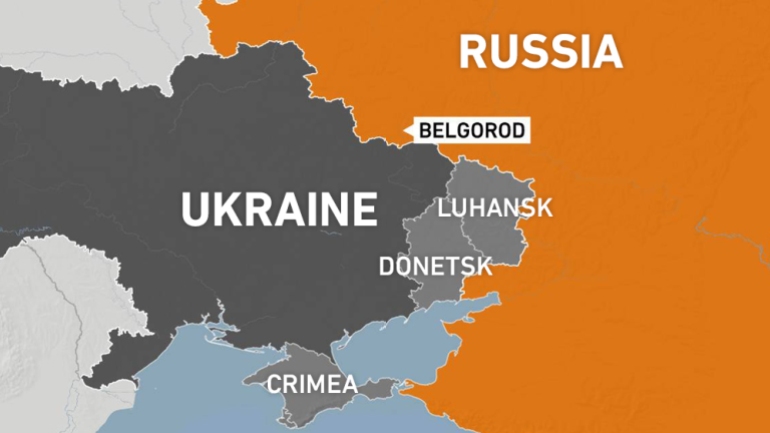 Oleksiy Arestovych, an adviser to Ukrainian President Volodymyr Zelenskyy, said in a YouTube interview that the attackers were from the Central Asian nation of Tajikistan and had opened fire on the others after an argument over religion.

Tajikistan is a predominantly Muslim nation, while about half of Russians follow various branches of Christianity. The Russian ministry had said the attackers were from a nation in the Commonwealth of Independent States, which groups nine ex-Soviet republics, including Tajikistan.

Al Jazeera was not immediately able to confirm the comments by Arestovych.

The independent Russian news website Sota Vision said the attack occurred in the small town of Soloti, close to the Ukrainian border and about 105km (65 miles) southeast of Belgorod.

Elisabeth Braw, senior fellow at the American Enterprise Institute, said the shooting showed how much anger there is at Putin’s mobilisation from inside Russia, and other former Soviet states.

“Regardless of who the perpetrator was, it shows how poorly protected Russian military bases are if somebody can just turn up and kill 11 soldiers at the base. And it also shows how unprepared the Russian authorities are. They didn’t even manage to kill them after one soldier was shot. The perpetrators shot 11 soldiers,” Braw told Al Jazeera.

“So it is really extremely embarrassing … You can imagine that if you are somebody who’s about to be called up or worried that you’d be called up you look at this and say: ‘Well, I better make my way out of the country through any means at my disposal because I don’t want to end up like this,'” she added.

Putin had ordered the mobilisation three weeks ago, part of a response to Russian battlefield defeats in Ukraine, with Kyiv’s troops clawing back territory occupied by Moscow for months. Fighting is particularly intense in the eastern Donetsk and Luhansk provinces, which together make up the industrial Donbas region.

Putin said on Friday that more than 220,000 reservists had already been called up as part of an effort to recruit 300,000. He promised the mobilisation would be wrapped up in two weeks.

The mobilisation has been troubled from the start, with authorities issuing confusing signals about who should be called up for service in a country where nearly all men under the age of 65 are listed as reservists.

Even though the Russian leader declared that only people who had recently served in the military would be subject to the call-up, activists and rights groups reported military conscription offices rounding up people without any army experience – some of whom were also unfit for service for medical reasons.

Some of the newly called-up reservists posted videos of themselves being forced to sleep on the floor or even outside and given rusty weapons before being sent to the front lines. Russian media reports said some of those who were mobilised were sent to combat without receiving proper training and were quickly killed.

Series of attacks on Belgorod

Saturday’s attack in the Belgorod training ground is the latest in a series of incidents to have hit the Russian region.

Earlier Saturday, Governor of Belgorod Gladkov said an oil depot was on fire after being shelled. He posted a photo showing flames and plumes of black smoke rising above a building.

Last week, Russia complained of an increase in artillery and missile raids on its territory bordering Ukraine.

And on Friday, the authorities said a Ukrainian attack had set fire to a power station in the regional capital, also called Belgorod, causing power cuts.

This came a day after a rocket gutted the top floor of an apartment building in the city of Belgorod, without causing injuries.

A munitions depot in the region was also destroyed on Thursday.

Earlier in the week, Russian officials said Ukrainian attacks had knocked out power in the town of Shebekino in the same region. A 74-year-old woman died, and several others were wounded in the town.

Zelenskyy meanwhile said on Saturday that nearly 65,000 Russians had been killed so far since the invasion began on February 24, a figure far higher than Moscow’s official September 21 estimate of 5,937 dead. In August, the Pentagon said Russia had suffered between 70,000 and 80,000 casualties, either killed or wounded.

He also said that Ukrainian troops were still holding the strategic eastern town of Bakhmut despite repeated Russian attacks while the situation in the larger Donbas region remained very difficult. Russian forces have repeatedly tried to seize Bakhmut, which sits on a main road leading to the cities of Sloviansk and Kramatorsk. Both are in the Donetsk region.

Kyiv said on Friday that it expected the United States and Germany to deliver sophisticated anti-aircraft systems this month to help defend against the missiles.