The attack on the Kerch Strait Bridge has highlighted that nowhere in Ukraine is Russia invulnerable.

Despite heavy security, innovative defences and dire warnings of retaliation if targeted, this symbol of Russian pride and engineering — at 19km (12 miles) the longest bridge in Europe — was severely damaged by what Russia said was a Ukrainian truck bomb.

The bridge — a strategic supply and logistics artery not only for Crimea but also for Russian forces in southern Ukraine — is vital for the war effort and has, therefore, been an obvious target for Ukrainian military planners.

Ukraine had few ways to strike it successfully; either its weapons didn’t have the range or weren’t powerful enough to do lasting damage to the $3.6bn steel and concrete bridge.

Ukraine’s air force could have attacked it in theory but would have had to deal with Russian S-300 and, even worse, the latest S-400 air defence missile batteries that guard the span. Ukrainian TB2 drones would fare no better. Their light armament is more suited to taking out vehicles and command posts than destroying sections of reinforced concrete.

Russian defences were bolstered around the bridge to augment the air defence batteries already in place. Fearing missile strikes either from the land or sea, barges festooned with radar reflectors were moored in front of it, facing out.

These are designed to give a false radar profile of the bridge, hoping to confuse any incoming missiles from the sea. 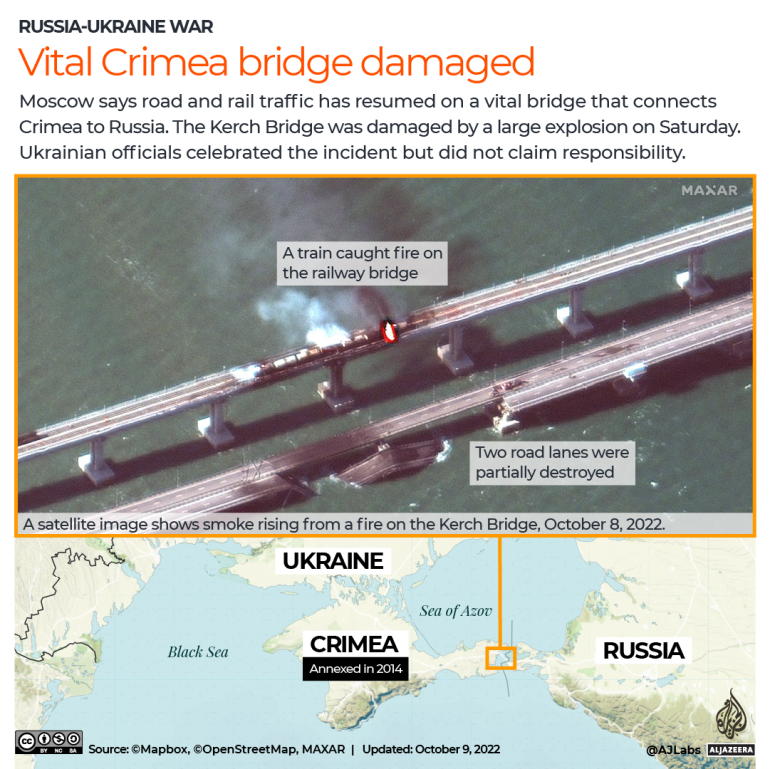 Dense smoke has also been tested as a way to obscure the shape of the bridge and help mask the radar and infrared profiles of the bridge used by certain types of precision-guided munitions and advanced cruise missiles.

These innovations — coupled with heavy patrolling by elite troops, combat air patrols, the presence of attack helicopters nearby plus the likelihood of electronic warfare units in the vicinity — all added up to a formidable defence to one of the highest-value targets of the conflict.

Penetrating all these defences with anything that could be large enough to damage the massive structure posed a serious problem.

Nevertheless, a large explosion took out a section of the road bridge on Saturday and severely damaged the rail line. While repairs began almost immediately, the impact on the Russian war effort — and on Russia’s psyche — was substantial.

Most of the logistics supplying Russia’s southern front, which are centred around the city of Kherson, run through Crimea. The damage to this vital route will have a serious impact on beleaguered Russian forces already squeezed by a Ukrainian counteroffensive.

Propaganda-wise it has been a huge boost for Ukrainian morale and a shock to Russian civilians already reeling from the impact of a recently announced troop mobilisation.

The damage to President Vladimir Putin himself has been substantial. With much fanfare, he opened the Crimea bridge himself in 2018, driving a truck across the strait. A close friend and ally built the bridge, and the attack, which came a day after Putin’s 70th birthday, has many Russians now openly doubting the effectiveness of his handling of the war.

Rise of the partisan

In the attack’s wake, Russia beefed up security on the bridge, handing responsibility over to the FSB, Russia’s domestic security service. Security was also tightened at other critical infrastructure, such as fuel storage depots and marshalling yards.

Intense security checks on the truck driver’s background and route he travelled before crossing the bridge have yielded little information so far that has been made public. Despite these efforts, partisan activity in Russian-held territory continues to grow.

Since the start of the invasion, Ukrainians fighting Russian forces in occupied land have been responsible for assassinating local leaders considered to be collaborating with Moscow.

Isolated attacks have become increasingly effective as these groups have started to coordinate with Ukraine’s military command. Sporadic attacks are now becoming more focused and deliberate as part of an overall strategy.

Ukrainian special operations forces are training, advising and arming guerrilla groups, instructing them in the art of sabotage, hit-and-run tactics, covert communications and the ability to stay hidden within a population while wreaking havoc on the enemy.

This training has now started to pay off. Partisan attacks have picked up since what Russia called its annexation in September of four Ukrainian territories. Inside Kherson, partisan activity has also taken on a surveillance role with spotters monitoring movements of Russian military and security personnel, the information then being handed over to the Ukrainian military.

According to Ukrainian media reports, in one attack last week, five FSB officers and two high-ranking Russian military officials were killed in an attack on a hotel in the city of Kherson.

Partisans don’t just operate in Kherson. There are reports resistance groups are also in the important railway city of Melitopol and activity has been reported in the town of Nova Kakhovka.

The town is important for several reasons. It is situated on the Dnieper River next to a dam and also at the mouth of the North Crimean Canal, which is vital for supplying freshwater to 85 percent of Crimea. This canal was blocked by Ukraine after Russia’s forced annexation of the peninsula in 2014 and its restoration was a Russian strategic war aim.

Putin and the southern front

While significant Ukrainian advances have been made in Donetsk and Luhansk in the east, the southern front hinges on a Russian tactical picture that is worsening by the day. More than 20,000 Russian soldiers are stranded on the far side of the Dnieper River.

A Ukrainian counteroffensive has been slowly eroding this Russian pocket with villages and towns on the northern and western sides steadily falling into Ukrainian hands. Russia’s slow retreat has been deliberate and not the mad dash for safety seen in Donetsk, where Russian troops abandoned their positions wholesale.

The wide river at their backs with few if any crossings coupled with the stiffening of penalties for desertion and unauthorised retreat have focused Russian forces into building better defensive positions and always ensuring they have a fortified area to withdraw to if the battle doesn’t go their way.

The fighting is intense, and while Russian forces of that size may be able to live off the land and the local population for a while, their ammunition and weapon replacements need to be supplied from logistical bases across the river. The attack on the Kerch Strait Bridge has now greatly weakened that supply line and made an already grim picture worse.

Most of the bridges across the Dnieper have been targeted by Ukrainian long-range fire and destroyed. Supply helicopters trying to reach the Russian enclave have been attacked and barges crammed with much-needed supplies sunk.

Pressure from without and within

Putin declared the attack on the bridge a “terrorist act” and coordinated air strikes against Ukraine targets, including Kyiv, in response.

The bridge bombing will embolden guerrilla and resistance groups in occupied areas, however, and attacks are likely to increase in frequency and scope. Ukraine’s focus on hitting Russia’s overextended supply lines has paid genuine dividends as its overreliance on rail transport makes the job of the Ukrainian partisan that much easier.

Pressure from these groups will build and could become far more than a mere irritant for a Russian military that will have to divert much-needed manpower to guard these areas. Russian reprisals are likely, especially if the guerrillas are successful.

Domestic opposition within Russia — first alerted to Russian setbacks by the sinking of the heavy cruiser Moskva — has been galvanised by the troop mobilisation announcement. Now Russian bloggers, normally pro-Putin and pro-military, are openly furious — both with Russia’s collapse in Donetsk and with a Russian status symbol such as the Kerch Strait Bridge successfully attacked.

Putin has cycled through generals, sacking anybody he feels has not been pulling his weight. But at the centre of this calamitous conflict sits a president, increasingly isolated, who is rapidly running out of people to blame.

Angry Russian politicians may soon focus on him as the source of their ire over the rapidly accelerating setbacks in the Russian invasion of Ukraine.