Authorities from the Bahamas and Cuba have said they stopped hundreds of Haitians attempting to reach the United States by sea.

The Royal Bahamas Defence Force said on Thursday it had deployed patrol vessels to the southeast Bahamas to defend against what it described as a “migrant surge” from Haiti.

Those vessels had intercepted more than 1,000 Haitians over the past 10 days, it added.

“The Royal Bahamas Defence Force is once again urging individuals to refrain from making long treacherous voyages on hazardous vessels, and in the process, risking the lives of many individuals,” it said.

Cuba’s foreign ministry, meanwhile, said this week an unspecified number of Haitian migrants had also arrived recently via boat on the coasts of its eastern and central provinces in a bid to reach the US state of Florida.

Both Cuba and the Bahamas said they would be repatriating the migrants to Haiti. The Royal Bahamas Defence Force said that repatriations were expected to begin on Thursday.

Haiti, the poorest country in the Americas, has grappled with widespread poverty and crime, worsened by earthquakes and hurricanes that have ravaged the country of more than 11 million people in recent years.

The recent assassination of President Jovenel Moise has further exacerbated a continuing political crisis, adding to the country’s instability.

Earlier this month, President Luis Abinader of the Dominican Republic, which shares the Caribbean island of Hispaniola with Haiti, told the United Nations General Assembly that Haiti was “already becoming a regional problem”.

In September, about 15,000 people, many of them Haitians, amassed at a camp underneath a bridge linking the US state of Texas with Mexico. Many had travelled from South America, fleeing Haiti at various points of the crisis since a devastating earthquake in 2010.

The situation led to a crackdown by US and Mexico authorities and mass deportations back to Haiti, which have been widely criticised by human rights groups.

US authorities have since expelled about 5,000 asylum seekers back to Haiti. 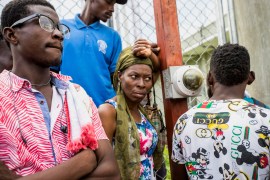 The journey of a Haitian migrant

US officials say 4,000 Haitians were sent back to Haiti from Texas. This is the story of one of them. 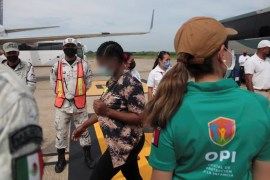 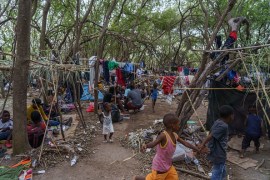