Mexico has sent a group of 70 Haitian migrants, including 13 children, on a plane to Port-au-Prince, in what the government said was part of an “assisted voluntary return” to Haiti.

In a joint statement on Wednesday, Mexico’s interior and foreign ministries said the flight was conducted as part of an agreement between Mexican and Haitian authorities to manage an increase in the number of Haitian asylum seekers moving through Mexico towards the United States.

The ministries added that the migrants had been in Mexico City and the nearby State of Mexico, as well as in the states of Hidalgo and Tabasco.

The announcement comes after a group of more than 14,000 migrants, most of them Haitians, crossed the Rio Grande River from Mexico to Del Rio, Texas, where they set up a makeshift camp under a bridge.

US President Joe Biden’s administration has expelled more than 4,600 Haitian asylum seekers back to Haiti on 43 flights, a US Department of Homeland Security spokesperson told CNN on Wednesday.

Thousands more remain in US Customs and Border Patrol custody, where most await expulsion.

The expulsions have garnered widespread condemnation from immigration advocates as well as members of Biden’s own Democratic Party, who argue that the asylum seekers should not be forced to return to a politically unstable country beset by violence and natural disasters.

Human rights groups and a top United Nations expert have warned that the expulsions could violate international law.

Most migrants were expelled under what is known as “Title 42”, a provision invoked by former President Donald Trump that cited the coronavirus pandemic as a reason to block asylum seekers from seeking protection at the country’s borders.

An estimated 8,000 asylum seekers fearing deportation to Haiti returned from the US to Mexico, where officials have urged them to follow through with asylum applications in the country’s South.

Thousands of others have amassed in the city of Tapachula, which borders Guatemala, but many have been waiting months for responses to their asylum applications.

Mexico’s national refugee agency has been grappling with surging demand that has overwhelmed its capacity. The Reuters news agency reported on Tuesday that about 1,000 migrants went to a sports stadium in Tapachula to book appointments to request asylum.

Chenet, 38, an asylum seeker from Haiti who did not give Reuters his last name, said he paid 6,000 pesos ($300) to someone in Tapachula to guarantee an appointment, without realising it was fraud.

“They say there’s nothing right now, there are no appointments,” he said.

Mexico’s Commission for Refugee Assistance (COMAR) said people with appointments through to October 20 and who do not verify their appointments before Thursday would lose their spot.

A representative from the UN refugee agency (UNHCR) told people waiting in a line that snaked across the stadium parking lot that the appointment verification process would free up room for others.

Haitians rank second for the most asylum applications in Mexico this year, after Hondurans. 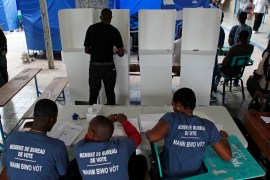 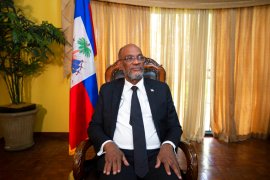 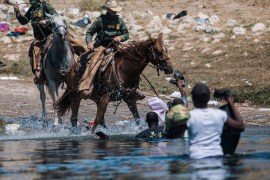 The border violence against Haitians reflects US racial ideology

It is not a coincidence that Haitians have the lowest asylum acceptance rates in the US and are deported en masse.