At least 25 people have died, several of them due to the biting cold weather, during the three-week protest by farmers on the Indian capital’s borders, police said, as Prime Minister Narendra Modi offers to “very humbly” hold further talks with the protesting farmers.

Manoj Yadav, director-general of police in the northern Haryana state, told Al Jazeera on Friday at least 25 farmers have died since November 26 when tens of thousands of farmers began demonstrations against three farm laws passed by the government in September.

“There have been about 25 deaths so far,” Yadav said, one of them being death by suicide two days ago. “Fourteen deaths were due to natural causes, mostly heart attacks and cold.”

The police officer said at least 10 people died in separate road accidents as they travelled from Punjab and Delhi states to participate in the protests.

However, farmer leader Darshan Pal told Al Jazeera the “number of dead could be as high as 35”. He said they died in the struggle against the “black [farm] laws” which farmers say will erode their incomes and help big corporations.

At least five farmers died in accidents on their way to join the protests, said Ashutosh Mishra, spokesman for the All India Kisan Sangharsh Coordination Committee.

The farmers, many in their sixties or above, have been braving North India’s harsh winter to camp out in the open with their tractors and trailers parked bumper to bumper.

Tens of thousands of farmers, largely from Punjab and Haryana, have been parked on various highways on New Delhi’s borders since the end of November demanding the rollback of the new laws aimed at loosening rules on the pricing, storage and marketing of crops.

Farmers fear private companies would eventually dictate terms and the government would stop buying grains like wheat and rice from them at a minimum guaranteed price.

Modi on Friday defended the laws and invited the protesting farmers for more talks, despite several negotiations failing to break the standoff.

After a series of previous meetings with Modi’s ministers, the protesters have said that nothing short of an official annulment of the three laws will be enough to change their position.

On Friday, in online remarks to farmers of the country’s biggest wheat-producing state, Madhya Pradesh, Modi said there should be no cause for concern and repeated the government’s position that farmers would be assured of a price.

“The modern facilities available to the farmers of major nations should also be available for those from India, it cannot be delayed any longer,” he said.

“Still, if anyone has any apprehension, and in the interest of the farmers of the country and to address their concerns, we are very humbly ready to talk on every issue.”

Rakesh Tikait, a farmers leader, said after Modi’s speech the prime minister was trying to privatise agriculture to benefit companies and not them.

Bilal Kuchay contributed to this report from New Delhi, India. 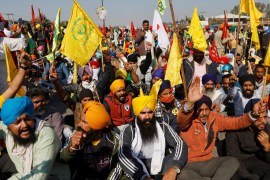 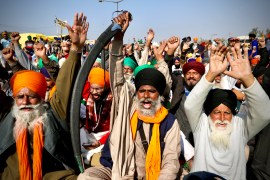 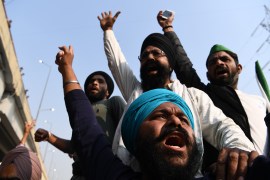