The leader of Ethiopia’s Tigray region has said his forces bombed the airport in neighbouring Eritrea’s capital, a major escalation as the heavy fighting in northern Ethiopia between federal government troops and Tigray forces spreads across an international border.

Tigray’s President Debretsion Gebremichael did not say how many missiles were fired at Asmara on Saturday but said it was the only city in Eritrea that was targeted.

Speaking to news agencies on Sunday, he also said his forces have been fighting Eritrean forces “on several fronts” for the past few days. He did not specify where but did say Eritrean forces were deployed and fighting along Ethiopia’s border.

His troops are fighting “16 divisions” of the Eritrean army in addition to Ethiopian soldiers, he said.

“As long as troops are here fighting, we will take any legitimate military target and we will fire,” said Gebremichael, denying reports that Tigray regional forces have entered Eritrea.

When asked about possibly targeting Ethiopia’s capital, Addis Ababa, he replied: “I don’t want to tell you, but the missiles are long-range as well.”

Eritrean officials have not responded to requests for comment. No immediate comment came from the Ethiopian government on Debretsion’s claim of the strikes on Eritrea.

Gebremichael’s comments to news media confirmed earlier reports from diplomats of cross-border shelling in the 12-day old conflict in Ethiopia.

Al Jazeera’s Mohammed Adow, reporting from the city of Gondar in Ethiopia’s Amhara region, said one of the rockets fired at Asmara was aimed at a building housing the Eritrean ministry of information and a number of local media outlets.

“Eyewitnesses tell us that the rocket that targeted the ministry of information missed its mark and fell outside the building,” he said.

“We don’t have any word on casualties. But what we do know is that this is a huge escalation of the conflict that has so far been restricted to the borders of Ethiopia, and particularly to the Tigray region. Now, it has crossed international borders and it is something that could bring Eritrea into the conflict.”

Abiy accuses the Tigray People’s Liberation Front (TPLF), which rules the mountainous region of more than five million people, of treason and terrorism and says his military campaign will restore order.

Eritrea and Ethiopia signed a peace deal two years ago, but Eritrean President Isaias Afwerki’s government remains hostile to the Tigray leadership after their role in a devastating 1998-2000 war. 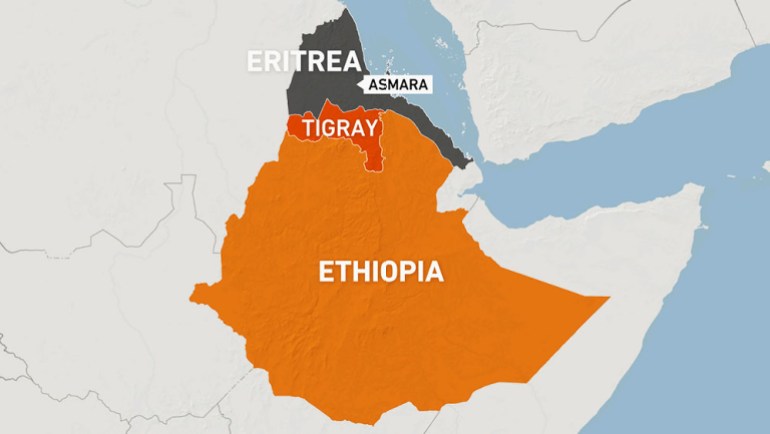 The fighting has killed hundreds of people on both sides, sent thousands of civilians fleeing into Sudan, and raised fears it could destabilise other parts of Ethiopia and the wider Horn of Africa region.

Several refugees arriving in the Sudanese border town of Hamdayat said their areas in Ethiopia had been shelled from Eritrea.

“We were shelled by artillery volleys from across the Eritrean border,” said Naksiam Guru, a 22-year refugee who lives near the border. “I saw people dying in the streets.”

Hamdayat is home to a camp hosting 8,000 refugees. Several hundred arrived on Saturday morning, some crossing a border river in boats, some swimming or wading through the water.

The strikes on Eritrea came on the same day the TPLF claimed rocket attacks on two airports in Ethiopia’s Amhara region “inflicted heavy damage”. TPLF said the attacks were in retaliation for government air raids against their region.

Abiy has said government warplanes were bombing military targets in Tigray, including arms depots and equipment controlled by Tigrayan forces. The government says its military operations are aimed at restoring the rule of law.

The Amhara government said the airport in Gondar was hit while another rocket aimed at the Bahir Dar airport missed its target. The federal government acknowledged “the airport areas have sustained damages”, adding a doctor said two soldiers were killed and up to 15 wounded.

“The TPLF junta is utilising the last of the weaponry within its arsenals,” the federal government’s emergency task force wrote on Twitter.

As the fighting intensifies, fears of ethnic attacks are rising.

Ethiopia’s Human Rights Commission, appointed by the government but independent, said it was sending a team of investigators to the Tigray town of Mai Kadra to investigate reports of mass killings.

Amnesty International said on Thursday that scores and possibly hundreds of civilians were stabbed and hacked to death in the region on November 9, citing images and witnesses. It said it had not been able to independently confirm who was responsible but said the witnesses had blamed fighters loyal to Tigray’s leaders.

The Tigray state government denied any involvement by TPLF members or the state’s special police force in “this most tragic event”.

The rights commission said in a statement it would investigate all allegations of human rights violations in the conflict.

“In this part of the world, any war is immediately a humanitarian crisis because of the socioeconomic situation, the presence of multiple borders and various ethnic groups” said William Lawrence, professor of political science at the George Washington University in the United States.

“You’ve got a lot of ethnic animosities and grievances. So, as soon as the killings and the atrocities start, it can spread to other areas rather quickly unless it is contained and de-escalated,” he told Al Jazeera.