Fighting between Ethiopian government forces and rebellious northern leaders could spiral out of control and war crimes may have been committed, the United Nations said on Friday, as repercussions spread around the volatile Horn of Africa.

The 10-day conflict in Tigray region has killed hundreds, sent refugees flooding into Sudan, and raised fears it may draw in Eritrea or force Ethiopia to divert troops from an African force opposing al-Qaeda-linked fighters in Somalia.

It may also blemish the reputation of Prime Minister Abiy Ahmed, who won a Nobel Peace Prize for a 2018 peace pact with Eritrea and had won plaudits for opening Ethiopia’s economy and easing a repressive political system.

“There is a risk this situation will spiral totally out of control, leading to heavy casualties and destruction, as well as mass displacement within Ethiopia itself and across borders,” UN rights chief Michelle Bachelet said via a spokesman.

A massacre of civilians reported by Amnesty International, if confirmed as committed by a party to the conflict, would amount to war crimes, she added.

The U.S. State Department’s top diplomat for Africa on Friday denounced the killing of civilians in the conflict.

“We condemn the massacre of civilians in Mai-Kadra and strongly urge immediate steps to de-escalate and end conflict throughout the Tigray region,” Tibor Nagy tweeted.

“It is essential that peace be restored and civilians be protected.”

Federal troops say the TPLF rose against them last week but that they have since survived a siege and recaptured the west of the region. With communications cut and media barred, there has been no independent confirmation of the state of the fighting.

The TPLF says Abiy’s government has systematically persecuted Tigrayans since he took office in April 2018 and terms the military operations an “invasion”.

Federal troops have been carrying out air raids and there has been fighting on the ground since Wednesday of last week.

Ethiopia denied a TPLF claim that federal jets had knocked out a power dam.

Civilians in the Sudanese border town of al-Fashqa, where more than 7,000 refugees have sought safety, gave first hand accounts of the escalating conflict in Tigray to Reuters news agency on Friday.

Witnesses described bombing by government warplanes, shooting on the streets and killings by machete.

Many of them described seeing dead bodies strewn alongside the roads as they fled under cover of darkness, fearing they would be found and killed.

“I saw the bodies of people who had been slain thrown in the streets. Others who were injured were dragged with a rope tied to a rickshaw,” said Araqi Naqashi, 48.

“What happened is frightening and terrible, and the Tigrayans are being killed and chased down. Anything is looted, and our area was attacked with tanks.”

There was no immediate response to Mulu’s appointment from current Tigray leader Debretsion Gebremichael, who won a local election in September despite central government orders to cancel it, or from other TPLF figures.

A dissertation by Mulu, on the website of Twente University in the Netherlands where he obtained a doctorate, states his birthplace as Tigray.

News also came on Friday that the African Union (AU) had dismissed its security head, an Ethiopian national, after Abiy’s government accused him of disloyalty.

Horn of Africa expert Rashid Abdi said Gebreegziabher was Tigrayan and his departure from the AU post was part of the Abiy government’s efforts to sideline prominent Tigrayans.

“The purging of competent Tigrayan officials in the midst of the conflict is not good for the morale of the (security and military) services,” he said, referring also to other removals of Tigrayan officials since the military offensive began.

“It also plays into the notion that this is essentially an ethnic war masked as a centre-periphery power struggle.”

However, Abiy this week urged Ethiopians to ensure Tigrayans are not targeted. “We all must be our brother’s keeper by protecting Tigrayans from any negative pressures,” he said.

His opening of political space since taking office in 2018 exposed ethnic fractures in Africa’s second most populous nation of 115 million people.

Before the Tigray flare-up, clashes killed hundreds and uprooted hundreds of thousands.

The local police chief told them of “the order of identifying ethnic Tigrayans from all government agencies and NGOs”, the report said, underlining the conflict’s ethnic undertones. Amhara borders Tigray and its rulers back Abiy.

The United Nations told the police they do not identify staff by ethnicity, according to the report. There was no immediate comment from the Amhara regional police or government.

Rights group Amnesty International said on Thursday that scores and possibly hundreds of civilians were stabbed and hacked to death in the region on November 9, citing witnesses who blamed the TPLF.

Debretsion denied that to Reuters.

More than 14,500 Ethiopian refugees – half of them children – have gone to Sudan since fighting started and aid agencies say the situation in Tigray is becoming dire.

There are also concerns about a mass displacement of thousands of Eritrean refugees at a camp in Ethiopia.

Ethiopia’s national army is one of Africa’s largest. But its best fighters are from Tigray and much of its hardware is also there, under the Northern Command.

“A protracted internal conflict will inflict devastating damage on both Tigray and Ethiopia as a whole, undoing years of vital development progress. It could, in addition, all too easily spill across borders, potentially destabilising the whole sub-region,” added the United Nations’ Bachelet. 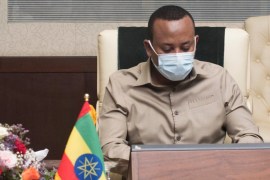 Ethiopia: How far will Abiy go with military operation in Tigray?

Ethiopia’s prime minister is stepping up a military offensive in the northern region of Tigray. 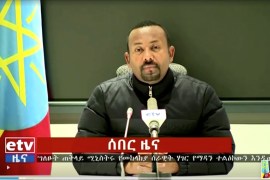 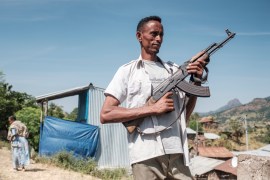 As fighting continues in Ethiopia, there are fears it could inflame old tensions between Amhara and Tigray.