The Earth could witness a dramatic decline in fish stocks, a 100-fold increase in the damage caused by superstorms and millions of people displaced by rising seas, if humanity does not reduce greenhouse gas emissions, according to a 900-page draft report by the United Nations’ Intergovernmental Panel on Climate Change (IPCC) obtained by the AFP news agency.

The report, which will officially be released on September 25, concludes that humanity must overhaul the way it produces and consumes almost everything to avoid the worst ravages of climate change and environmental degradation.

It is due to be the fourth in a series of UN reports in recent months on the effects of climate change and specifically focuses on the planet’s oceans and cryosphere – areas composed of frozen water.

The destructive changes have already been set in motion, according to the report. Melting glaciers will first give too much, causing widespread flooding, and then too little, bringing drought, to billions who depend on them for freshwater, the report finds.

Without cuts to man-made emissions, at least 30 percent of the northern hemisphere’s surface permafrost could melt by the end of the 21st century, unleashing billions of tonnes of carbon and accelerating global warming even more, the study says.

The IPCC said in a statement that draft reports are “not intended for public distribution” and that drafts were “works in progress”.

“The text can change between the drafts and the final version once the IPCC has carefully considered every line,” it said.

In September, governments will meet in Monaco to hash out the new report’s official summary. While the underlying science, which draws from thousands of peer-reviewed studies, cannot be modified, diplomats with scientists at their side will tussle over how to frame the findings, and what to leave in or out.

The previous three reports, which were released beginning in 2018, focused on capping global warming to 1.5 degrees Celsius, the state of biodiversity, and how to manage forests and the global food system.

The draft report concludes that even with the most optimistic emission-reduction scenarios, by 2050, many low-lying megacities and small island nations will experience “extreme sea-level events” every year.

By the year 2100, “annual flood damages are expected to increase by two to three orders of magnitude”, or 100- to 1,000-fold, the summary for policymakers says.

Even if the world manages to cap global warming at 2C, the global ocean waterline will rise enough to displace more than a quarter of a billion people, the report says.

Earth’s two ice sheets, sitting atop Greenland and Antarctica, have lost roughly 400 billion tonnes of mass each year in the decade to 2015, becoming the main driver of the rising sea levels, the draft report’s summary says.

“Even if the number is 100 or 50 million [displaced people] by 2100, that’s still a major disruption and a lot of human misery,” Ben Strauss, CEO and chief scientist of Climate Central, told AFP.

“When you consider the political instability that has been triggered by relatively small levels of migration today, I shudder to think of the future world when tens of millions of people are moving because the ocean is eating their land,” he said.

Earth’s average surface temperature has gone up 1C since the late 19th century, and is on track at current rates of Carbon Dioxide (CO2) emissions to warm another 2-3C by end of the century.

The 2015 Paris Agreement, which aims to mitigate greenhouse gas emissions, calls for capping global warming at “well below” 2C.

Moving into the 22nd century, sea-level rise will accelerate rapidly, and “could exceed rates of several centimetres per year”, about 100 times more than today, according to the report.

“If we warm the planet by two [degrees Celcius], by 2100 we will only be at the beginning of a runaway train ride of sea-level rise,” said Strauss, whose research was used in the report.

Oceans serve as a marine sponge for the planet, soaking up a quarter of the CO2 emitted by humans and absorbing more than 90 percent of the additional heat generated by greenhouse gas emissions since 1970. As a result, the oceans have become warmer, more acidic and less salty, according to the report.

Without this absorption, global warming would already have made the Earth’s surface intolerably hot for humans.

This comes at a cost, as the increase in CO2 in ocean waters causes a phenomenon called acidification, which disrupts the ocean’s basic food chain.

So-called marine heatwaves, which is the anomalous heating of areas of the ocean, have become twice as frequent since the 1980s and are creating vast oxygen-depleted dead zones, the report states.

The life-giving oxygen in marine environments has dropped two percent in 60 years, and is on track to lose another three to four percent by 2100 at current rates of carbon pollution, according to the report.

Globally, the corals upon which half-a-billion people depend for food and protection are unlikely to survive surface warming of 2C above preindustrial levels, the report says.

The warming is also expected to lead to a doubling in the frequency of extreme El Ninos, which drive forest fires, cause disease outbreaks and affect cyclones if emissions are not cut.

World leaders will gather in September for a separate summit convened by UN Secretary-General Antonio Guterres, who will seek stronger national commitments in confronting the climate crisis. The summit will end two days before the IPCC report’s official release.

But the current state of the so-called “Big Four” – the countries and regions which are responsible for nearly 60 percent of global fossil fuel-based emissions – does not bode well for Guterres.

While the four – China, the United States, India and the European Union – face devastating fallout from the ocean and ice-related impacts of climate change, none seems prepared to announce more ambitious goals for purging carbon from its economy.

US President Donald Trump was a no-show at the G7 climate segment at this year’s summit in France. In 2017, Trump said the US would withdraw from the Paris Agreement. He has also systematically dissembled predecessor Barack Obama’s climate policies.

India is rapidly developing solar power, but continues to build up coal-fired capacity.

The EU is moving towards a mid-century “net-zero” emissions goal, but several member states are dragging their feet.

Long seen as a leader on climate, China – which emits nearly as much CO2 as the US, EU and India combined – has recently been sending mixed signals.

“The eyes of Beijing are gradually moving away from environmental issues, and climate change in particular,” Greenpeace International analyst Li Shuo, a longtime observer of China’s climate policy, told AFP.

A resurgence of domestic coal-fired power and a relaxing of air pollution regulations, he said, point to a reorientation towards China’s slowing economy and its trade war with the US, and away from environmental concerns. 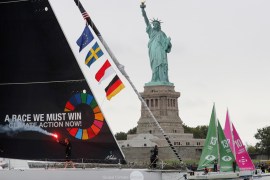 Environmental advocate has arrived in the US by boat ahead of planned meetings at UN headquarters and in Chile. 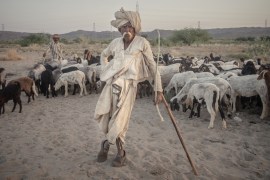 ‘We can only watch our animals die’: A drought disaster in Kutch

In Kutch, a northern Gujarat district, residents say their livelihoods are at risk as experts warn of a water crisis.