The European Union has rejected a push by Boris Johnson, Britain’s new prime minister, to rewrite an agreement over the United Kingdom’s departure from the bloc, or Brexit.

The dismissal on Thursday by EU Brexit negotiator Michel Barnier came as European officials accused Johnson of “bullying” and taking a “combative” approach by amping up the threat of a damaging “no-deal” divorce.

A day after assuming office, Johnson on Thursday set up a showdown with Brussels by vowing to negotiate a new divorce deal and threatening that, if the EU refused, he would take his country out of the bloc on October 31 without one.

In his first address to parliament as Britain’s new prime minister, Johnson said the terms of the agreement struck in November by his predecessor, Theresa May, were “unacceptable” and would “sign away our economic independence”.

He urged the bloc to “rethink” its opposition to a new deal, saying: “If they do not, we will, of course, have to leave the EU without an agreement.”

Johnson said he would not accept the Irish backstop, an insurance policy designed to preserve a free-flowing border between Ireland and Northern Ireland by provisionally keeping the UK tied to the EU’s economic rules. Ireland is an EU member, while Northern Ireland is part of the UK.

“It must be clearly understood that the way to the deal goes by way of the abolition of the backstop,” he said, while also threatening to withhold the exit payment of 39 billion pounds ($49bn) that May agreed to if there was no deal.

“As suggested by his rather combative speech, we have to be ready for a situation where he gives priority to the planning for ‘no deal’, partly to heap pressure on the unity of the EU27,” Barnier said in a note to EU member states on Thursday.

He told the bloc to “remain calm, stick to our principles and guidelines and show solidarity and unity.”

‘Best and only agreement possible’

In Paris, Amelie de Montchalin, French state minister for European affairs, said on Friday there was no question of renegotiating the divorce deal but that the two sides still had much to talk about.

“What is still to negotiate is the future relationship,” de Montchalin told public broadcaster France 2. “We have to create a working relationship and not get into games, gestures and provocations.”

French President Emmanuel Macron would hold Brexit-related talks with Johnson in France in the coming weeks, she added.

In Berlin, a German legislator and ally of Chancellor Angela Merkel said the EU would not be bullied into compromising its principles.

“Neither boastful speeches nor bullying will succeed in making us give up #EU principles and unity,” Norbert Roettgen said in a tweet addressed to Johnson. “Will stay cool instead,” he added.

Dear @BorisJohnson: Neither boastful speeches nor bullying will succeed in making us give up #EU principles and unity. Will stay cool instead. Sadly, both in words and deeds – has appointed a cabinet of #Brexiteers – #Johnson fails to reach out to country and continent. #Brexit

European Commission President Jean-Claude Juncker told Johnson in a phone call on Thursday that EU leaders have given Brussels no mandate to renegotiate.

“President Juncker listened to what Prime Minister Johnson had to say, reiterating the EU’s position that the Withdrawal Agreement is the best and only agreement possible – in line with the European Council guidelines,” Juncker’s spokeswoman Mina Andreeva said.

The Irish backstop, contained in a protocol of the Withdrawal Agreement May negotiated, is the most contentious part of the deal for British legislators, who fear it could ultimately slice Northern Ireland off from the rest of the UK.

Irish Prime Minister Leo Varadkar, whose heavily trade-dependent nation stands to lose most from a messy EU-UK split, repeated his call for compromise on Thursday.

“I hope that the new UK prime minister hasn’t chosen no deal,” he said.

Without a divorce deal, Britain faces a chaotic Brexit that economists warn would disrupt trade by imposing tariffs and customs checks between the departing country and the bloc. They say that could send the value of the pound plummeting and plunge the UK into recession.

Johnson argues that his threat of a messy end to Britain’s EU involvement will force Brussels to relent and give London better terms that would let it pursue trade deals with powers such as China and the United States.

Since taking office on Wednesday, Johnson has changed more than half the ministers in May’s team and installed what some have described as the most right-wing British government in decades.

The 55-year-old has assembled a team of social conservatives and Brexit hardliners who argue that leaving the EU after 46 years without an agreement will be less painful than economists warn.

It is almost certain that opposition legislators will try to topple Johnson’s government in a vote of no-confidence in September.

There also is rising speculation that Johnson could call an early election in hopes of gaining a majority in parliament for his plans.

The country’s next scheduled election is not until 2022, and Johnson says his priority is Brexit, not an early poll – but he has not ruled one out. 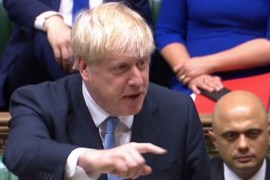 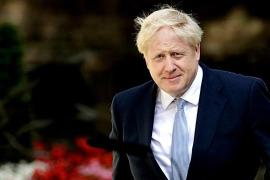 More than half of the top jobs in government are gone – many of them sacked – and replaced by prominent Vote Leave campaigners.