By Maram Humaid and Farah Najjar

Gaza, Palestine – A flotilla carrying at least 25 patients, students and activists have broken Israel’s imposed boundary off the coast of the Gaza Strip, the first time in more than a decade.

The group set sail on Tuesday morning from the besieged Gaza Strip, hoping to break Israel’s debilitating siege on the enclave that has trapped more than two million Palestinians since 2006.

“We’re surrounded by Israeli warships to the left, the right, to our front and from behind. We’re stuck in the middle,” an activist on the flotilla told reporters.

“We’re all safe and request your prayers.”

The widest range Israel has allowed in the past 10 years is 12 nautical miles (22km), and at times, the limit was reduced to one nautical mile.

The siege breaches our basic rights and dreams

Tuesday’s flotilla carried patients, students, and protesters who had been injured in the weeks-long demonstrations dubbed The Great March of Return – all hoping to reach Limassol, Cyprus, which lies north of Gaza.

Organisers and authorities told Al Jazeera that all of those on board had valid passports, with the injured having made arrangements to receive medical treatment in Turkey.

Hundreds of others boarded more than 30 boats in support of the main vessel, but said they would not cross the permitted boundary.

The boats, most of which are small fishing vessels, carried men and women mostly in their 20s and 30s. Some families said they showed up with luggage and passports, hoping to leave Gaza for good.

For 50-year-old Mona al-Araysha who was among the crowds hoping to leave Gaza, life in the enclave had become “unbearable”.

The mother of five said residents were yearning for “a way out”.

“We can’t just stay quiet, we have to be proactive and this is just one way of showing the world what we can do,” she told Al Jazeera prior to the boat setting sail.

Following the 2014 Israeli assault on Gaza, three of al-Araysha’s children fled to Europe via the Mediterranean.

She had hoped to follow in their footsteps with her two youngest children. 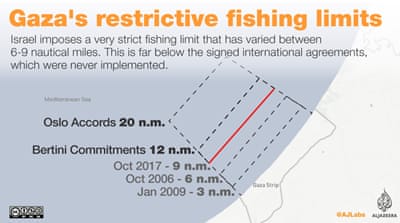 Zakaria Nabhan, from al-Breij, had also hoped to board one of the boats, hoping to receive treatment after being shot in the knee.

Nabhan was shot by Israeli forces on March 30, while he was protesting near the fence with Israel as part of the weeklong demonstrations.

He is now on crutches and said he needed urgent medical attention, like thousands of others trapped inside the strip.

“The siege breaches our basic rights and dreams,” Nabhan, who also wishes to leave in order to continue his education, told Al Jazeera prior to the main vessel setting sail.

“We need border crossings to leave, we need functioning hospitals and access to medicine.”

Nabhan and al-Araysha were not on the main vessel, but had hoped to get on one of the supporting boats.

The move coincides with the eighth anniversary of Israel’s attack on the Turkish Mavi Marmara flotilla, which killed nine Turkish nationals while the boat was sailing in international waters.

Gaza’s coastguard was at the scene on Tuesday managing the crowds and instructed the vessels not to cross the permitted nautical boundary fearing an Israeli reaction.

Israeli forces have over the past few weeks, attacked two boats which the organising committee had intended to use for the initiative.

Earlier this year, Israeli forces opened fire at Ismail Saleh Abu Riyala, an 18-year-old fisherman as he was preparing for a night of fishing.

Before the boats took off on Tuesday, an opening ceremonial event was held by members of the flotilla’s organising committee, who are also involved in the March of Return campaign.

As a show of support, members from various factions including the Popular Front for the Liberation of Palestine, the Islamic Jihad movement, and Hamas – the group that governs the Gaza Strip – attended the opening event.

They told hundreds of people near Gaza City’s port that the main objective of the voyage is to “break the siege until we achieve our right of return”.

“Today, the passengers, including patients, injured people and students are going to convey their message of being Palestinian in the Gaza Strip – that we want freedom,” al-Hayek said.

“They are expected to be attacked by Israeli [soldiers] but they are determined to reach Cyprus no matter the circumstances,” he said.

Organisers have reiterated the voyage was a continuation of the March of Return, which began on March 30 with Palestinians rallying for the right of return for refugees to the homes and villages they were forcibly expelled from in 1948.

Since then, Israeli forces have killed at least 120 Palestinians in the coastal enclave and wounded at least 13,000 others.

In 2007, following the election victory of Hamas and the group’s assumption of control over the territory, Israel imposed a strict land, aerial and naval blockade on Gaza.

And in 2013, neighbouring Egypt, which has largely closed its border crossing with Gaza, blocked tunnels connecting Gaza with Egypt’s el-Arish, shutting off the only other route out of the strip.