By Will Thorne and Will Jordan

The Prosecutor General of Ukraine has launched an investigation into claims surrounding an alleged multi-million dollar lobbying contract that names one of US President Donald Trump’s most influential fundraisers, Elliott Broidy.

The 12-page document, which appears to have been signed by Broidy, outlines his role as providing “political advocacy” on behalf of a now sanctioned Russian bank, VTB.

The deal was apparently dated June 12, 2014, just weeks before VTB Bank was blacklisted by the United States and European Union as a key Kremlin asset following Russia’s invasion of Crimea. Russian President Vladimir Putin is guest of honour at VTB Bank’s investor conference every year.

The document raises serious questions about whether Broidy is in breach of the US Foreign Agents Registration Act (FARA), a law that has gained prominence following the investigation of special counsel Robert Mueller into foreign meddling in the 2016 presidential election. Former Trump campaign chairman Paul Manafort and his aide Rick Gates have both been charged as a result of their work in Ukraine.

The document, obtained by Al Jazeera’s Investigative Unit, also suggests that Broidy, a national deputy finance chairman of the Republican National Committee, would provide the same services to Investment Capital Ukraine (ICU), a Ukraine brokerage that has acted as financial advisors to President Petro Poroshenko.

“If this is a bonafide document, it is very troubling,” says the Washington-based organisation Citizens for Responsibility and Ethics in Washington (CREW).

“Broidy appears to be an unregistered agent of a foreign principal in violation of federal law,” says spokesman Jordan Libowitz.

US law requires American citizens involved in lobbying on behalf of foreign governments or parties to register with the US Department of Justice on their Foreign Registered Agents (FARA) database. Al Jazeera found no evidence that Broidy is registered despite mounting evidence of multiple foreign clients.

Details of the alleged consultancy first emerged in Ukraine in January. The files were handed to Ukraine’s Prosecutor General, who has ordered the Kiev Prosecutor’s office to investigate further.

Ukraine’s Institute of Law and Society submitted the documents to authorities, and the reform group is now calling for a thorough investigation in both Ukraine and the US.

The document outlines the work to be undertaken by Broidy, which includes “regular political and business analysis, political advocacy, investment advice, and money management” to VTB Bank and ICU.

The consultancy work was apparently to be paid in five annual payments of $2.5m from an offshore company, Quillas Equities SA, which is registered in the British Virgin Islands, but with an address in Dubai.  According to the Panama Papers, a massive leak of offshore documentation, Quillas Equities SA’s shareholder is Yuri Soloviev, first deputy president and chairman of VTB Bank Management Board.

The document names Broidy as a consultant who has “many years of investment banking and money management experience.” It goes on to detail his “expertise in international investments and American politics.”

The alleged agreement outlines Broidy’s background in Republican politics, describing how he served “as Finance Chair of the Republican Party and has access to US politicians and government agencies.”

The business and lobbying activities of this prominent Republican are coming under increasing scrutiny beyond Ukraine.

Last week a group calling itself LA Confidential leaked emails that appeared to show Broidy and his wife Robin Rosenzweig, deputy finance chair of the Republican National Committee, asking for more than $75m to quash an investigation in the US into a multibillion-dollar fraud in Malaysia.

Further revelations came from The New York Times, which reported that Broidy has a lucrative defence contract with the United Arab Emirates (UAE) and that he had lobbied President Trump to meet privately with Crown Prince Mohammed bin Zayed al-Nahyan, the leader of the UAE. The emails suggest he has direct access to the US President.

In 2009, Broidy pleaded guilty in New York to bribing New York state pension officials with almost $1m in return for their $250m investment in an Israel-focused investment fund he helped to manage.

He and the firm paid over $30m in fines; however, the charges against Broidy were downgraded, and he avoided jail.

Now, Broidy claims he is the victim of a “hack” and smear campaign orchestrated by the state of Qatar in response to his criticism of the Gulf state’s record against terrorism, a charge that Qatar denies.

Amid long-standing regional rivalries, the UAE, along with Saudi Arabia, Egypt and Bahrain, has imposed a nine-month-long siege on Qatar. Broidy has close financial ties to the UAE and its royal family.

Broidy’s wider links with the Middle East are now reportedly of interest in the FBI’s far-reaching probe into foreign influence in US politics, which are mostly focused on Paul Manafort. Breaches of the Foreign Agents Registration Act form a key part of this investigation.

A second document appears to expose further connections with the UAE. It outlines a plan for ICU and an Abu Dhabi based company to invest $40m into a fund to be managed by Broidy. The same group also handed what is described as a “Confidential Memorandum of Understanding” to prosecutors in Ukraine.

The Abu Dhabi firm and ICU apparently agreed to provide 80 percent of the investment, including an initial $3.5m payment.

It is unclear as to what the $40m was to be used for. This alleged MOU states that the deal was effective from December 2014, but omits specific details on how the money would be invested. It is also not clear if it was ever completed as the paperwork is unsigned.

Broidy owns a security company, which is run by former US military personnel and provides services to governments in the Middle East. Its services include conducting “specialised operations, infrastructure protection and training.”

Broidy, a Los Angeles-based financier and seasoned political operator, has raised millions of dollars in donations for the Republican Party. He is tipped to be a key part of Trump’s campaign team for 2020.

In a response to these claims, ICU denies that the company, or its affiliates, has had any relationship with Broidy or his company and describes the contracts as being part of an elaborate forgery.

“We believe they are part of a malicious fraud against us,” they told Al Jazeera in a statement.

VTB Bank also denied dealing with the Republican Party fundraiser. “Yuri Soloviev is not acquainted with Elliott Broidy and has never had any business dealings with him.”

Al Jazeera also approached Broidy for comment during the preparation of this article. However, no response was received. 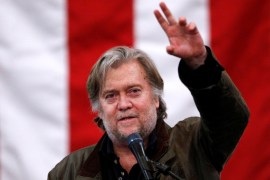 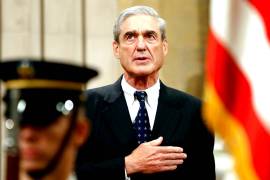 The biggest threat to Donald Trump’s presidency is not Mueller or his band of hungry prosecutors – it is Trump himself.