Nearly 90,000 Rohingya Muslims have fled to Bangladesh in the last 10 days, uprooted by reported rapes, murders and acts of arson by the Myanmar army.

Vivian Tan, regional spokesperson for UNHCR, told Al Jazeera on Monday that women, children and the elderly made up the bulk of the 87,000 who had crossed into Bangladesh since violence erupted on August 25.

“We’re seeing many pregnant women, new-born babies and the elderly make their way to relief camps on the Bangladeshi side of the border,” she said.

“Sadly we’re also hearing from many of them that they haven’t eaten in days.”

Viewed by the UN and the US as one of the world’s most persecuted minorities, thousands of Rohingya flee their homes every year in a desperate attempt to reach Bangladesh and other neighbouring countries.

The latest mass exodus comes after suspected Rohingya fighters attacked police posts and an army base in the western region of Rakhine.

The Myanmar government has blamed the Arakan Rohingya Salvation Army (ARSA) for the violence, but fleeing Rohingya civilians accused the Myanmar army of carrying out a campaign of arson and killings – aimed at forcing them out of the country.

Tan told Al Jazeera that the latest figure of 87,000 Rohingya did not include refugees who had fled in previous decades or those who had set up temporary shelter in “no-man’s land”, an area between the Bangladesh and Myanmar border.

“Since the 1970s, only 34,000 Rohingya have been registered with the UN in Bangladesh,” Tan said, with “estimates of unregistered refugees in the hundreds of thousands.”

As a non-signatory to the 1951 Refugee Convention, Bangladesh has refused to register the Rohingya as refugees since the early 1990s, nor allowed them to lodge asylum claims.

Ro Nay San Lwin, a Rohingya activist and blogger based in Europe, said many of the refugees were struggling to accept they could ever return to their ancestral homeland.

Using a network of activists on the ground to document the conflict, San Lwin told Al Jazeera that some refugees walked seven or eight days from Buthidaung to make it to Bangladesh, while those from Maungdaw had to walk for five days.

Up to 30,000 Rohingya refugees live in Kutupalong and Nayapara, two government-run camps near Cox’s Bazar, with tens of thousands more living in makeshift camps.

“All of them are very weak, dehydrated and hungry and the Bangladesh government is not helping their situation at all.

“Unless the Bangladesh government opens the border, they’re receiving these refugees unofficially and it’s unlikely they’ll ever be able to return to their homeland officially.

In a separate video, a Rohingya woman said she and her family had not eaten in days.

“We’re also hearing reports of several villages facing shortages of food,” Lwin said. “If things continue as they are people could start starving to death.”

According to the latest estimate by UN aid workers in Bangladesh, nearly 150,000 Rohingya have sought refuge in the country since October.

Rakhine is home to most of Myanmar’s 1.1 million Rohingya, who live largely in abject poverty and face widespread discrimination by the Buddhist majority.

The Muslim Rohingya are widely reviled as illegal migrants from Bangladesh, despite having lived in the area for generations.

They have been rendered stateless by the government and the UN believes the army’s crackdown may amount to ethnic cleansing – a charge the government of Aung San Suu Kyi vehemently denies. 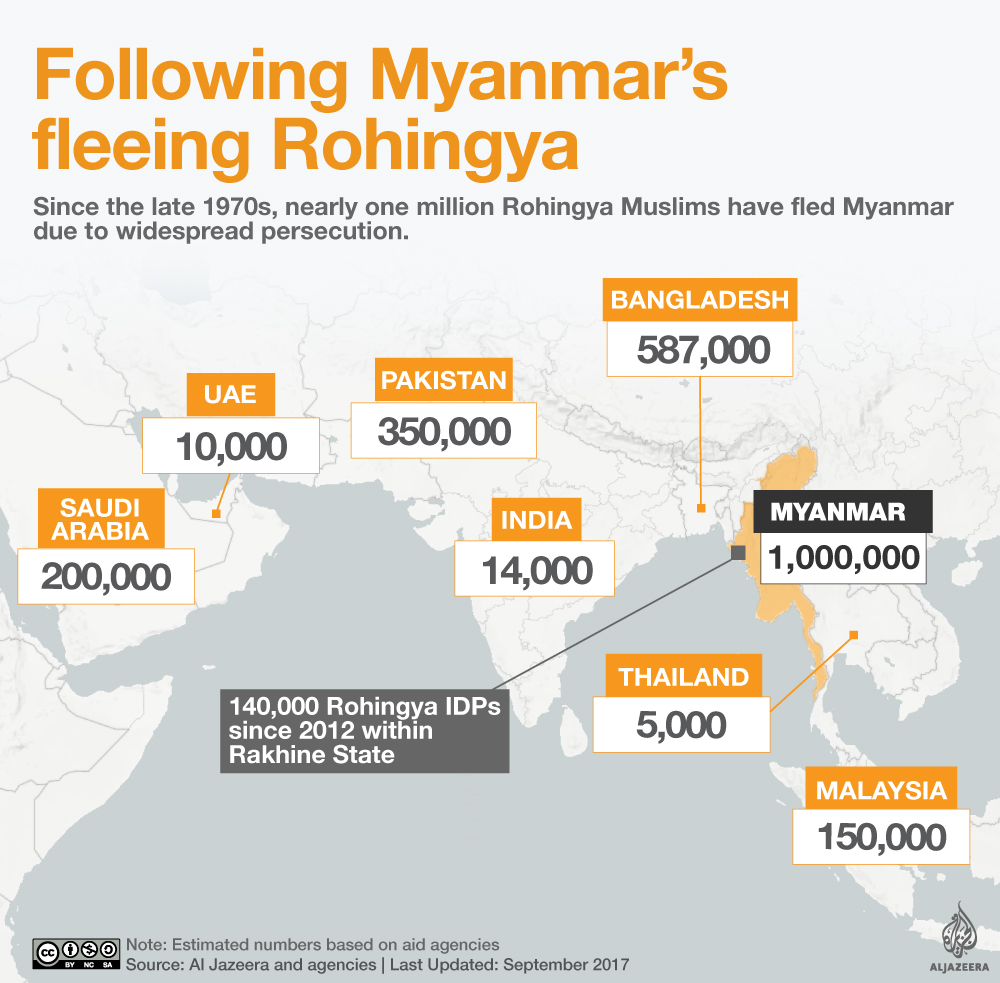