Saturday’s referendum seeks to replace the country’s Senate with elected regional councils, abolish several other state bodies and make a small alteration to the national flag, adding a red band at the top and bottom to honour those who fought for freedom from France.

About 1.4 million Mauritanians were eligible to vote, and results are expected early next week.

Polling stations closed on Saturday at 1900 GMT in the conservative West African nation after peaceful voting.

Violent clashes had broken out in recent weeks after the authorities banned several rallies planned by opponents of the changes.

The remaining parties joined civil society groups that called for a total boycott for amendments they consider unconstitutional.

Al Jazeera’s Rob Matheson, reporting from the capital Nouakchott, said on Saturday that according to the government, the Senate was too expensive and performed similar roles as the lower house of parliament.

“But the opposition says that the Senate provides the political brake on the power of the president and on how long he can stay in office,” he said.

“Aziz has been in power from 2009. He is serving the second five-year term in office. The opposition is convinced that if these reforms do go through, that will open the door for him to stay until 2024 and possibly much longer.”

They have held several protests attracting thousands of supporters, but have also been prevented from demonstrating by the security forces, who on Thursday shut down several planned rallies close to the capital with tear gas and baton rounds.

The UN Human Rights Office said on Thursday that “protest leaders were reportedly beaten up and a number of them were arrested” during campaign rallies in the last few weeks, urging the government “take all necessary measures to ensure free, transparent and credible elections”.

Mauritania won independence from France in 1960. The current constitution came to force in 1991. 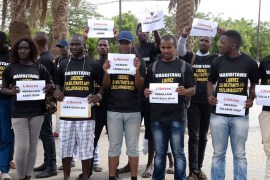 International activists say the verdict is a “devastating blow to the Mauritanian anti-slavery movement”. 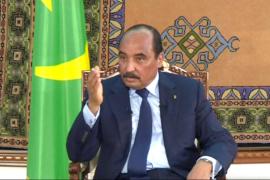 Mohamed Ould Abdel Aziz, the president of Mauritania, is calling for a referendum over proposed constitutional amendments. If voted in, the controversial changes will abolish the Senate and change the country’s flag.