Expectations were low as the White House has yet to outline a clear vision for peace.

The Palestinians initially welcomed Trump’s election, but they have since grown impatient with what they say is a failure by the US president to present a plan for peace.

Specifically, they are seeking a halt to Israeli settlement construction in the occupied territories, and a US commitment to the establishment of an independent Palestinian state as part of a peace deal with Israel.

“If the US team doesn’t bring answers to our questions this time, we are going to look into our options because the status quo is not working for our interests,” Ahmad Majdalani, an aide to Abbas, said prior to the Palestinian leader’s meeting with Kushner.

It was not clear whether Kushner offered any clarity during his three-hour meeting with Abbas.

Nabil Abu Rudeineh, Abbas’ spokesman, called the meeting “positive,” without discussing details, and said the Palestinian leader had reiterated his desire for US commitment to a Palestinian state.

“We greatly appreciate the efforts of US President Donald Trump who pledged from the beginning that he is going to work for the ultimate deal,” Abbas said before the meeting.

“We know things are difficult and complicated, but nothing is impossible with good intentions.”

Kushner relayed Trump’s hope and optimism for “a better future” for Palestinians and Israelis.

Trump took office with hopes of striking what he calls the “ultimate deal” between Israelis and Palestinians – a goal that has eluded administrations before his dogged by the same intractable issues. But he has since given few details of this vision for peace, frustrating both sides.

Ian Black of the London School of Economics said that until Trump lays out a plan for a two-state solution, any progress in the peace process will be difficult to deliver.

“I don’t think there is anything in the way of expectation that Jared Kushner is going to be able to deliver on behalf of his difficult father-in-law,” Black told Al Jazeera.

“President Trump has not even spelled out a commitment to a fundamental principle of a two-state solution to the conflict, and without that, it’s very hard to see how anybody representing him, no matter how close or how talented is going to make much progress.”

OPINION: Why Kushner’s Middle East visit is set for failure

Kushner’s connection to Israel, including his family’s investments in illegal settlements in occupied territory and personal relationship with the current Israeli prime minister,  has also caused some Palestinian leaders to question the ability of the Trump administration’s Middle East team to be impartial.

Kushner met Netanyahu in Tel Aviv earlier Thursday before travelling to Ramallah later in the day to meet Abbas.

Before his meeting with Kushner, Netanyahu spoke optimistically of the road ahead.

“We have a lot of things to talk about, how to advance peace, stability and security in our region, prosperity too,” Netanyahu said, standing alongside Kushner. “I think that all of them are within our reach.”

A statement from Netanyahu’s office after the meeting said the talks were “substantive” but gave no details on progress or further steps.

On the campaign trail, Trump took a staunchly pro-Israel line, energising Netanyahu and hard-liners in his coalition.

He promised to relocate the US Embassy from Tel Aviv to Jerusalem – a move welcomed by Israel and opposed by the Palestinians – and refused to endorse the Palestinian goal of independence.

His platform played down the significance of Israeli settlements, which are illegal under international law, and surrounded himself with a group of advisers with deep ties to the settlement movement, including Kushner and the US ambassador to Israel, David Friedman.

But since taking office, Trump decided not to move the embassy and has urged Israel to restrain settlement construction.

Since the collapse of US-mediated peace talks three years ago, the two sides have grown further apart and have been plagued by repeated rounds of violence, including a war between Israel and Hamas and recurring tensions over the al-Aqsa Mosque compound in occupied East Jerusalem.

They have also held talks with Egyptian, Saudi, Emirati, Qatari and Jordanian officials. 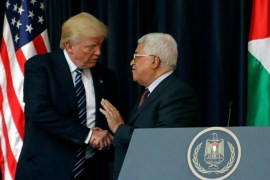 No details have emerged about US president’s plan to revive stalled Israeli-Palestinian peace talks. 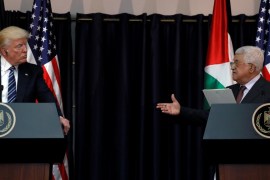 US president calls for peace between Israelis and Palestinians but sheds little clarity on how to achieve that.