The United Nations is investigating reports of a Saudi-led air attack on a hotel near Sanaa, the capital of Yemen, as the death toll rose to at least 41 people, including women and children.

Hussain Albukhaiti, an activist based in Sanaa, told Al Jazeera that at least 13 people were still missing on Thursday after the air raid a day earlier.

Citing local residents, Albukhaiti said that the Saudi-led coalition, which controls Yemen’s airspace, carried out a “double-tap”, first striking the hotel, then a gate leading to the building.

Dozens of people were crushed to death, he said, after the roof of the two-storey building collapsed.

Several others, including first responders, were then “cut into pieces” by the second military attack.

Albukhaiti said that there were no Houthi rebels present in the area or at any military installation nearby at the time of the attack.

The UN could not confirm the assault, but rights officials were investigating the reports, UN Secretary-General Antonio Guterres’ spokesman said in New York.

“What is clear is that any attack on civilians is unacceptable. This is a message we have often repeated, and we will continue to repeat,” Stephane Dujarric said.

UN humanitarian chief Stephen O’Brien described the conflict between the Saudi-backed Yemeni government and the Houthis as a “deplorable, avoidable, completely man-made catastrophe” in a briefing to the UN Security Council last week.

The number of air raids per month is now three times higher than last year, and monthly reports of armed clashes are up 50 percent, he said.

The conflict in Yemen has escalated dramatically since March 2015, when Saudi-led forces launched a military operation against rebels.

Since fighting began, more than 10,000 people have been killed, and millions have been driven from their homes.

The country is also facing a health crisis, with close to 2,000 people having died from cholera since April, more than half a million people infected, and another 600,000 expected to contract the infection this year. 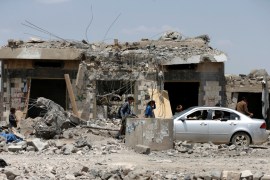