British Prime Minister Theresa May is withholding a report on “foreign funding of extremism” which reportedly criticises Saudi Arabia, according to UK reports quoting statements by the Home Office and Downing Street.

Both offices said that the prime minister is personally responsible for deciding whether to release the report, which had been commissioned by ex-Prime Minister David Cameron in 2015 and approved by May, who was home secretary at the time, The Guardian reported.

In a written reply to a June 27 question by the Green Party co-leader, Caroline Lucas, May said on Monday: “Ministers are considering advice on what is able to be published and will report to Parliament with an update in due course.”

According to The Guardian, Sarah Newton, a parliamentary under-secretary of state at the Home Office, also responded to Lucas this week: “The review into the funding of Islamist extremism in the UK was commissioned by the former prime minister and reported to the home secretary and the prime minister in 2016.”

“Publication of the review is a decision for the prime minister.”

The UK’s Home Office told Al Jazeera in a written statement: “The review has improved the government’s understanding of the nature, scale and sources of funding for Islamist extremism in the UK.”

“Astonishing that the Govt is sitting on this report but refuses to publish it or give any reason for their secrecy,” said Lucas in a tweet.

Saudi Arabia is the UK’s biggest trading partner in the Middle East, with exports of more than $8bn in British goods and services to the country in 2015.

But Tim Farron, leader of the opposition Liberal Democrats, told Al Jazeera that the government’s priority should be security, rather than trade.

“If there are people – no matter how lucrative the business deals you have with them or their country – who are funding those who would murder our children and innocent people, then it is security that comes first,” he said.

“It would be an absolute crime against the people of this country for Theresa May to continue sitting on this report.”

Campaign groups and legal experts have called on the UK to end arms sales to Saudi Arabia, saying that weapons were being used for human rights violations in the war in Yemen.

The UK is one of the top suppliers of arms to Saudi Arabia with successive governments, both Labour and Conservative, signing major arms deals with the kingdom.

In the past three years, the UK has approved arms export licences to Saudi Arabia worth $4.7bn.

Andrew Smith, spokesperson for the Campaign Against Arms Trade, told Al Jazeera there are serious questions to be asked.

“If Saudi Arabia is involved in any way in either exporting terrorism, or willingly ignoring terror which is being funded from Saudi Arabia, then, of course, hard questions need to be asked,” he said.

A government spokesperson told Al Jazeera that Saudi Arabia is not the main focus of the report and denied that the delay in publishing was linked to any sensitivity surrounding the kingdom.

Al Jazeera’s Neave Barker, reporting from London, said, “while the report remains private, many continue to question whether Britain’s trade ties have been put before national security”. 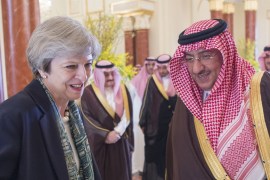 Theresa May arrives in Saudi Arabia for trade talks

In her first official visit to the kingdom, the UK leader meets officials to discuss trade post-Brexit.