Syria’s government and opposition will meet on Monday for a seventh round of UN-sponsored peace talks with little expectation of a breakthrough to end the six-year conflict.

The talks in Geneva open after a ceasefire took effect in three provinces in southern Syria on Sunday, with a monitoring group reporting that the region was mostly quiet despite scattered violations.

The ceasefire was brokered by the United States, Russia and Jordan, and is the latest agreement reached outside the Geneva framework.

In principle, the new round of Geneva negotiations will focus on four so-called “baskets”: a new constitution, governance, elections and combating “terrorism”.

Al Jazeera’s Sue Turton reported from Geneva that one of the key areas the opposition was focused on is the transitional period, what Syrian governance will look like after the war. But the two sides are deadlocked on matters such as what will happen to the Syrian president.

“The spectre that is hanging over all of that is the fate of Bashar al-Assad. I think it is fair to say that this is one area where the two sides are still diametrically opposed – whether Assad should be allowed to stay or whether he should go,” she said.

As he arrived for the talks on Monday, UN Syria envoy Staffan de Mistura told reporters: “We will work very hard” and that time constraints had stymied progress.

The last talks ended in May with little progress towards ending a war that has killed more than 320,000 people since it began in March 2011.

Still, both sides are expected to participate once again, with Yehya al-Aridi, a spokesman for the opposition High Negotiations Committee, telling AFP he had “modest expectations”.

The Geneva talks began in 2014, and have continued intermittently despite a dearth of results.

Since January, they have been increasingly overshadowed by the separate process organised by Russia, Iran and Turkey in the Kazakh capital of Astana.

Natasha Ghoneim, Al Jazeera’s correspondent in Gaziantep, said that the hope when Russia launched the Astana talks to run in tandem with the Geneva talks was to accomplish what the UN had not been able to after years of talks.

“What we’re seeing is an understanding of just how difficult it is going to be to negotiate an end to the war in Syria,” she said.

The three countries agreed in May to set up four “de-escalation zones” in Syria, although they have so far failed to agree details necessary to implement the plan.

The ceasefire in southern Syria covers three provinces included in one of the de-escalation zones.

“We hope that an agreement will be reached for the other areas that have been discussed as soon as possible and this will lead to significant support for the political process,” he added. 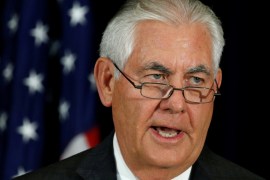 US would consider no-fly zone in Syria if Russia agrees

US says it wants to discuss use of ceasefire observers and coordinated delivery of aid to Syrians with Russia. 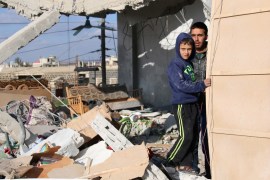