Paris, France – Things were looking good for Francois Fillon shortly after he was selected as the presidential candidate for The Republicans, the French right-wing party.

In the weeks after his victory, the former prime minister enjoyed a healthy showing in the opinion polls with Ipsos putting him in the lead with 29 percent of the vote, four points ahead of his nearest rival Marine Le Pen of the National Front (FN).

Fast forward to the month of the election and the same pollster puts Fillon on 19 percent: not only behind Le Pen, but also the centrist Emmanuel Macron and the leftist candidate Jean-Luc Melenchon.

Chief among the accusations is that Fillon employed his wife Penelope as a “parliamentary assistant”, paying her close to a million euros ($1.07m) over a period of at least eight years, starting in 1998.

That is quite legal, but the scandal centres on whether Penelope actually did any work.

A string of further allegations emerged shortly afterwards, this time involving payments to his children for work they did as students.

Fillon has apologised for the payments but refuses to step down.

In the meantime, his poll numbers have tanked and authorities have placed him under formal investigation, even raiding his home in early March.

The FN leader is alleged to have made payments to party activists under the guise of employing them as parliamentary assistants as a member of the European Parliament.

Members of Le Pen’s staff have been put under formal investigation, but the far-right candidate herself continues to enjoy immunity as an MEP, despite ongoing attempts by prosecutors to have it revoked.

Unlike Fillon, however, Le Pen’s numbers have stayed more or less static throughout the campaign, with numbers at about a quarter of the vote or just under.

Philippe Marliere, a professor of French and European politics at University College London, told Al Jazeera that Le Pen had not been as affected by the fallout of corruption allegations because of the perception that she had not personally gained from the misuse of finances.

This, according to Marliere, stands in contrast to Fillon, who faces allegations of personally benefiting from the funds.

“When politicians in any country benefit personally from corruption it always looks worse because they are already paid well and it looks like they’re misusing public funds just to get richer.

“That’s why it’s played out really badly for Fillon.”

Fillon’s reputations had also suffered because the allegations involving his wife were not isolated and the former prime minister has been implicated in other scandals, Marliere said.

had to accommodate his policy of austerity by saying there’s too much corruption and that money is not well spent…Then immediately these allegations hit him, so he was totally discredited.”]

Media outlets in France have reported on several scandals involving the candidate dating back decades.

“Some of these are tiny issues but when you add them all up it starts to look very bad,” he said.

The scandals affecting both Fillon and Le Pen, however, are far from isolated occurrences.

In an article for Al Jazeera, French sociologist Ali Saad noted a number of major politicians had been involved in similar scandals.

“The Fillon affair reflects the very essence of an oligarchic system dominated by a powerful ruling elite that takes advantage of the political and/or administrative functions to serve its own financial interests and maintain its privileges with total disregard to the society’s dire economic situation,” he wrote.

Among examples Saad lists are former budget minister Jerome Cahuzac, who was convicted of fraud and held an undisclosed Swiss bank account.

Fillon’s platform is based on fiscal conservatism and the promise that he will dramatically slash public spending by reducing the state’s headcount by half a million employees.

To assuage the unpopularity of the measure, Fillon had emphasised tackling waste and corruption in the initial part of his campaign.

Those early pledges have now come back to haunt him, Marliere explained.

“He had to accommodate his policy of austerity by saying there’s too much corruption and that money is not well spent,” Marliere said.

“Then immediately these allegations hit him, so he was totally discredited.

“Voters are questioning why he is asking the public to tighten its belt while he benefits from state money in this manner.”

With less than a week left until the first round of the election, there is still time for Fillon to turn things around and defy expectation by reaching the second round.

Nevertheless, his current fourth place in the polls represents a significant fall for a man once considered the favourite to lead France. 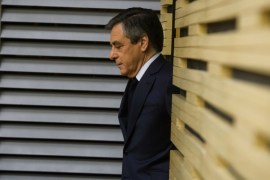 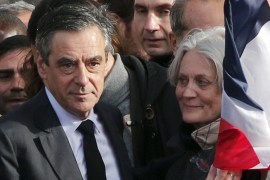 Will France’s Francois Fillon be forced to step aside?

Former prime minister is under pressure to quit the French presidential bid amid a corruption scandal.