China’s ruling communist party has voted to keep President Xi Jinping in office for another five years and enshrine his name and doctrine into its constitution.

The move on Tuesday elevated his status as one of the country’s most powerful leaders, alongside figures such as Mao Zedong and Deng Xiaoping.

The announcement was made at the end of the 19th Congress of the Chinese Communist Party (CCP), a twice-a-decade assembly of thousands of party representatives in the capital, Beijing.

“Living in such a great era, we are all the more confident and proud, and also feel the heavy weight of responsibility upon us,” Xi, 64, told delegates gathered at the Great Palace Hall following the vote.

It is the first time since the rule of Chairman Mao that the name of a leader is enshrined in the party ideology.

After his death, Deng was also honoured with the so-called Deng Xiaoping Theory for his role in jumpstarting the Chinese economy in the 1980s after years of stagnation.

“The Chinese people and nation have a great and bright future ahead,” declared Xi, who was joined on stage by his predecessors Hu Jintao and Jiang Zemin.

On Wednesday, the party will hold its meeting and announce who will join the 25-member party committee, the most powerful body in the Chinese hierarchy of leaders.

Xi’s era began in March 2013. Read below to find out more about the leaders of the People’s Republic of China since its establishment in 1949.

Hu Jintao– The son of a tea trader, Hu led China as president from 2003 to 2013. Highlights of his two five-year terms in office include the 2008 Beijing Olympics and the Shanghai Expo in 2010.

Hu was credited for the country’s solid economic growth, and for modernising China’s infrastructure. But he was also blamed for widespread corruption, which ensnared the likes of Prime Minister Wen Jiabao’s family.

Most of Hu’s allies – including Bo Xilai, CCP secretary of Chongqing, and Zhou Yongkang, the former chief of domestic security of the country – were also sent to prison on corruption charges.

Like his successors, Hu and Xi, Jiang also led as chairman of the military and as CCP general secretary.

He rose to power during the tumultuous period in the late 1980s, which culminated in the Tiananmen Square protests and killings in 1989. He was named general secretary after Zhao Ziyang was forced out of power for siding with the student protesters.

The peaceful return of Hong Kong and Macau to China, from the United Kingdom and Portugal respectively, happened during Jiang’s term.

At 91, he is one of the longest living Chinese leaders. During the most recent Congress, he caught the eye of photographers and sparked a social media frenzy when he was caught taking a nap during Xi’s three-and-a-half hour speech.

Deng Xiaoping – Ruling from 1978 to 1989, Deng was considered China’s “paramount leader”, even though he neither became the country’s president, nor the CCP’s general secretary.

He gained the respect of the party hierarchy by being one of the “revolutionary” leaders of the country, who participated in the Long March between 1934 and 1935.

His rise to power was unlikely, as he and his family were purged twice during Mao’s Cultural Revolution, and Mao made efforts to sideline him.

During his two decades in power, Deng embarked on a modernisation of the economy. He also repudiated the Cultural Revolution, which left at least 1.5 million Chinese killed, and millions of others imprisoned, tortured or publicly humiliated, including Deng’s family.

Like Jiang, his legacy was tainted by the deadly Tiananmen killings in 1989.

Hu Yaobang – He served as the CCP’s general secretary between 1982 to 1987, pushing for economic and political reforms. However, he earned the ire of party elders who were trying to defy efforts to push for more transparency in government.

Like Deng, Hu was also purged during the Cultural Revolution. He regained prominence and power during the leadership of Deng, only to lose it again in 1987 after he was forced out in a power struggle within the CCP. His death in 1989 led students to march in the streets of Beijing and later sparked the Tiananmen protests.

Zhou Enlai – Was seen as a top deputy of Mao Zedong, serving as the country’s first prime minister from 1949 until his death in 1976.

Zhou was considered the architect of Mao’s foreign policy, playing a role in the Korean Armistice, which halted the war between North and South Korea, as well as the 1972 visit of US President Richard Nixon to China.

Mao Zedong – He was the founding father of the People’s Republic of China, and served as the CCP’s chairman from 1945 to his death in 1976.

The Hunan Province native not only helped establish the CCP but also led the establishment of the Red Army, which fought the Japanese occupation in China.

After the defeat of the Japanese, Mao led an assault against the other faction of the Chinese political establishment, the Kuomintang forces, which led to the civil war from 1940 to 1949.

While being credited for establishing modern China, and its engagement with the West, Mao was also blamed for the failed policies of the country, including the Cultural Revolution and the Great Leap Forward, both of which led to deadly consequences.

The Great Leap Forward was blamed for widespread famine, which led to the death of at least 18 million people. There were some reports that the death toll during the famine was closer to 55 million.

Despite his legacy, Mao is still revered by many Chinese people, and his image dominates the most famous destination in Beijing, the Tiananmen Square.

How President Xi Jinping wants to reboot China’s economy with robotics, electric cars and control of the internet. 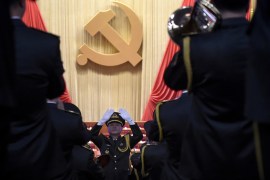 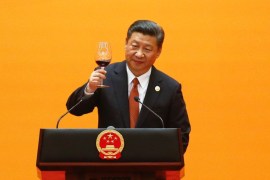 Chinese leader speaks in positive terms as US president says ‘lots of very potentially bad problems will be going away’. 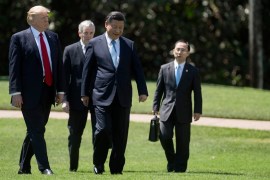