Marawi City, Philippines – ISIL’s Southeast Asian oblates may have failed at their first attempt to carve out territory here, but their defeat was by no means final.

With the Philippine government delaying a peace deal that would give a predominantly Muslim southern region more autonomy, experts, rebels and even officials warned of possible attacks from several armed groups that have pledged allegiance to the Islamic State of Iraq and the Levant (ISIL, also known as ISIS).

Philippine President Rodrigo Duterte promised to sign the deal into law after his predecessor, Benigno Aquino III, failed to do so. However, Duterte’s allies in congress have not prioritised passing the measure.

“There is consistent prejudice against the Bangsamoro people,” Ebrahim said, referring to the southwestern Mindanao region that is home to several Muslim ethnic groups collectively called “Moro”.

Ebrahim and other Moro leaders said the attack on Marawi should not have come as a surprise; they all made public warnings about the emerging ISIL presence in their region, and pro-ISIL groups had been publishing propaganda about their plans of setting up a caliphate in the Philippines.

Agakhan Sharief, owner of a university in Marawi and a respected religious leader, knew the young men who eventually became the leaders of the pro-ISIL Maute group of fighters who laid siege to the city.

Sharief said Omar, Abdullah and Madi Maute approached him earlier and asked him to join an armed group they were forming. Sharief refused.

During the rally, Sharief’s voice boomed on loudspeakers, warning that a group of young men with dark plans would wreak havoc on the country if the government did not follow through on the Bangsamoro peace deal.

True enough, on May 23 this year, the Maute group of fighters launched the attack on Marawi that would last five months and lead to the deaths of at least 1,000 people.

“Why do some government officials blame the war on us Moros?” Sharief asked. “They should have acted on the information we gave them.”

At the height of the battle to retake the city, Philippine defence chief Delfin Lorenzana admitted he and other security officials “failed to appreciate” intelligence reports on local ISIL-linked groups.

After the military killed Omar Maute and his conspirator Isnilon Hapilon, Lorenzana told a press conference that lessons had been learned from the war in Marawi about the threat posed by pro-ISIL groups.

“We used to ignore those threats. From now on, we will take them very seriously,” Lorenzana said.

The Philippine government received help from countries including China, Indonesia, Malaysia, Russia and the United States in winning Marawi back from the attackers.

Their guard was still up when Al Jazeera visited them for an interview. Tundok and his troops constantly patrol a wild and vast area unfamiliar to government forces.

“It takes a Moro to fight a Moro,” Tundok said ruefully of battling their kin who submit to ISIL’s ideology.

“This is our sacrifice – to fight our own brethren and shed our own blood for the sake of lasting peace,” he added.

Critics believe the Bangsamoro peace deal is crucial in cutting ISIL’s influence on armed groups, but it is unclear whether Duterte thinks so.

The president has acknowledged he is aware of what his country is up against.

“Terrorism is everywhere,” Duterte told an audience recently, warning them to be ready for possible attacks. 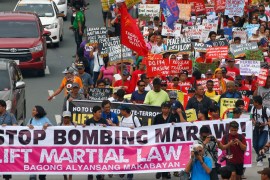 Congress backs bid by President Duterte to give army further powers in order to clear fighters from troubled region. 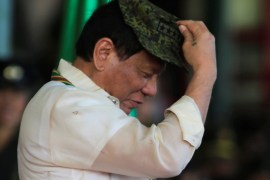