US President Donald Trump has repeated his criticism of the Iran nuclear deal, ahead of a crucial decision that could make or break the two-year-old international agreement.

On Wednesday, Trump again called the agreement between Iran and six world powers “the worst deal” the US has ever signed.

“We did it out of weakness, when actually, we have great strength,” Trump said. “We got nothing.”

“We will see what happens pretty soon,” he said in an interview with the US broadcaster Fox News.

When asked if he would refuse to certify or withdraw from the deal, he said, “We could do both. I know exactly what I want to do.”

Trump’s European allies and other world leaders have been urging him to certify that Tehran continues to be in compliance with the 2015 deal, signed during the term of his predecessor Barack Obama.

But ever since he took office, Trump has been hinting that he could refuse to certify it, despite conclusions by UN inspectors of Iran’s compliance.

During the 2016 presidential campaign, he had also vowed to “tear it up”.

In recent days, Trump has ramped up his criticism of Iran, saying Iran had “not lived up to the spirit” of the deal.

In response to the Obama administration’s decision to sign the nuclear deal, the Republican-controlled Congress passed a law requiring the US president to notify Congress every three months whether Iran has lived up to the requirements of the bargain.

The deadline for Trump to make that decision is October 15, but he could make an announcement as early as Thursday, according to reports.

Trump previously certified the deal twice since becoming president. At the same time, his administration also slapped new sanctions on Iranian individuals and entities over its missile programme, even though that is not covered by the agreement.

On Tuesday, following a phone call with Trump, British Prime Minister Theresa May issued a statement defying the US leader: “The PM reaffirmed the UK’s strong commitment to the deal alongside our European partners, saying it was vitally important for regional security,” the statement said.

Emmanuel Macron, president of France, has also warned that it would be a “grave error” to withdraw from the deal, which he said is “solid, robust and verifiable”.

There have also been reports that European leaders are considering ways to bypass Trump to save the deal.

But Saeid Golkar, an Iran analyst at the University of Tennessee, told Al Jazeera that “it would be difficult for any country to work with Iran”, if the US withdraws from the deal, particularly if Washington reimposes sanctions.

While admitting that the deal is “not perfect”, Javad Zarif, Iran’s foreign minister, told Al Jazeera that “it has to be less than perfect, so all sides can live with it”.

Zarif also said that the US “cannot impose pressure” his country to abandon its dignity and sovereignty. But he also said that it would not be the first to violate the deal.

Meanwhile, Federica Mogherina, European Union foreign policy chief, said that if the US backs out of the deal, it would send a message “that America cannot be trusted upon”.

“This is not a way of making deals, not in foreign policy, not in private businesses, and I think President Trump understands this perfectly well,” she told PBS News.

‘Must enforce the hell out of it’

If Trump decides to refuse to certify the Iran agreement, Congress will have 60 days to decide whether to reimpose sanctions on Tehran, a move that could doom the deal and risk retaliation from Iran.

On Wednesday, Ed Royce, a senior Republican member of Congress and a Trump ally, refused to call for an end to the agreement.

“As flawed as the deal is, I believe we must now enforce the hell out of it,” Royce, chairman of the foreign affairs committee of the House of Representatives, said during a hearing on Iran.

Meanwhile, the US president has also picked a fight with Bob Corker, chairman of the Senate foreign affairs committee and a member of Trump’s Republican Party.

He recently accused Corker of “giving” the US the Iran deal, though Corker repeatedly voiced his opposition to the agreement before it was signed.

Both Royce and Corker’s support are crucial if Trump wants to reimpose sanctions on Iran. 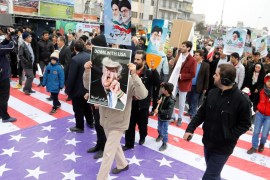 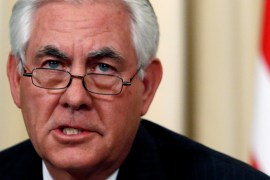 US secretary of state says Tehran’s behaviour undermines US interests in Syria, Iraq, Yemen and Lebanon.