As the sounds of his supporters’ cheers filled Seoul’s air, celebrating a projected landslide victory in South Korea’s presidential election, Moon Jae-in stepped on to a platform at his party’s election headquarters and declared: “Today is the day to open a door for a new Republic of Korea.”

Hours later, the National Election Commission declared him the winner with 41 percent of the vote.

Moon inherits leadership of a country fed up with corruption and hungry for a leader with a new vision.

His term begins on Wednesday, and he will be tasked with managing relations with North Korea, China and the United States, and attending to multiple domestic challenges.

Moon, 64, has humble origins. He was born on Geoje, a small island off South Korea’s south coast, to refugees who had fled war in North Korea. Despite living in poverty as a child, he excelled in school and earned a spot at a university in Seoul in the 1970s, where he majored in law.

At the time, South Korea was a dictatorship, under military ruler Park Chung-hee (father of recently ousted president Park Geun-hye), and Moon took a prominent role in student protests against Park’s suspension of civil and political rights. He was arrested and expelled from university, but later allowed to return and complete his studies. After graduation, his history as an activist disqualified him from government jobs in courts or the prosecution.

He relocated to Busan, South Korea’s second-largest city, where he became a human rights lawyer, working with Roh Moo-hyun, who in 2003 took office as South Korean president. Roh appointed Moon to his secretariat, giving Moon his first experience in governance.

Since embarking on his own political career, Moon has carried the baggage of his close association with Roh, who though popular among liberals for his warmth and charisma, is remembered by many as an ineffective statesman – Roh committed suicide in 2009 as allegations of influence peddling began to envelope his family and close associates.

Conciliatory approach to the North

By demographic, Moon’s support is lowest among South Korea’s older generation, who tend to be conservative and are put off by his more conciliatory tone on dealing with North Korea.

On right-wing television shows and online message boards, Moon is often accused of being an apologist for the North, and depicted as a pushover who lacks the gravitas to responsibly handle South Korea’s national security. The top-polling conservative candidate in the election, Hong Joon-pyo, released one campaign ad in which he superimposed a North Korean flag over Moon’s place on the ballot, depicting a vote for Moon as a vote for Pyongyang.

Much of the Western media coverage of South Korea’s election has honed in on how Moon might handle relations with the Donald Trump administration in the US, and how he will address North Korea’s growing arsenal of missiles and nuclear weapons.

Moon has pledged to strengthen South Korea’s long-standing alliance with the US and to cooperate with  Trump. In an interview with The Washington Post, Moon voiced his opinion that Trump is “more reasonable than he is generally perceived”.

At the same time, Moon has vowed to breathe life into South Korea’s frozen relations with the North, saying he supports holding direct talks and restarting economic cooperation projects.

Under Roh, Moon was an architect of the so-called Sunshine Policy, which mandated unconditional aid with the hope of spurring North Korea’s denuclearisation. Conservative critics condemned the policy as a waste of money that failed to induce better behaviour from Pyongyang.

Jobs, corruption and the economy

The domestic conversation about South Korea’s election has revolved around how a new president could make society fairer, and how to boost a sagging economy beset by rising unemployment and inequality.

A poll by Gallup Korea, released the week before the vote, found economic vitalisation and job creation the respondents’ top two choices for the most important tasks facing the next president, with national security coming third.

To address concerns about employment, one of Moon’s campaign pledges was the creation of 12,000 new jobs in government and civil service. Government jobs are particularly sought-after by young South Koreans nowadays owing to their stability and generous pensions.

Park Geun-hye, Moon’s predecessor as president, was forced out of office by allegations that she used her influence as the country’s leader to help a shady confidante amass millions in corporate donations.

Protesters filled public squares across the country for months, decrying what they saw as unfair collusion among the top ranks of South Korean government and business. As president, one of Moon’s tasks will be addressing public demands to root out corruption, and rein in the corporate conglomerates that dominate the South Korean economy.

A prosecutors’ probe over the corruption scandal that led to Park’s impeachment has also convulsed the country’s biggest conglomerate, Samsung Group, with its chief Jay Y. Lee under arrest for bribing the country’s president and a close friend of hers.

Geoffrey Cain, a business analyst and author of a forthcoming book on Samsung, noted that pledges for stricter corporate regulation disappeared from Moon’s platform as the campaign wore on.

Previous South Korean presidents, including Park, have come into office promising to get tough on conglomerates, only to later prove unable, or unwilling, to follow through.

“The conglomerates have a hand in everything. They are the cash engine and political patrons of nearly every successful president. It’s not wise, politically, to move hard against them,” Cain said.

Moon will not have a long time to savour his victory, as his term as president will start on May 10.

“Celebrations in the Moon camp will be brief, as Moon will have to contend with an impending North Korean nuclear test, the Trump administration’s still-unclear policies in the region, frictions with China, and an electorate that expects immediate reforms of the South Korean political system,” said Markus Bell, an assistant professor in Sheffield University’s School of East Asian Studies.

Bell added: “Moon may not have the luxury of prioritising these challenges, as Kim and Trump are likely to test him from the outset.” 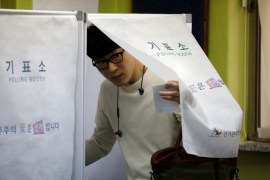 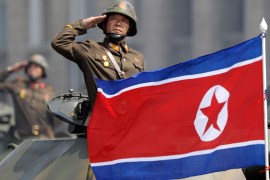 The North Korea’s KCNA says Kim Hak-song is being held on ‘suspicion of hostile acts against the state’.