Istanbul, Turkey – Only a few days remain before the referendum in which Turkish voters will decide whether they want to be governed by a presidential office with significantly increased powers.

The proposed constitutional changes in the April 16 referendum seek to transform Turkey’s current system to an executive presidential one.

Al Jazeera speaks to Ibrahim Kalin, President Erdogan’s spokesperson, on the recent developments in advance of the referendum, his views about the constitutional changes and his response to the critics.

Al Jazeera: Why does Turkey need a strong executive presidency? Why does the government feel that the parliamentary system -currently in place- is insufficient to govern Turkey?

Ibrahim Kalin: Let me start by saying that Turkey doesn’t have a parliamentary system per se but a hybrid system of government designed by a military junta in 1960 and fine-tuned again by coup plotters in 1980.

This hybrid system was intended to maintain the status quo and protect the military guardianship regime. The current system, furthermore, tends to produce weak coalition governments and to keep the political arena fragmented. It was the ineffectiveness of such governments that repeatedly paved the way to military coups in Turkey.

In 1980, the Parliament failed to elect the next president after 115 rounds of voting before the coup plotters stepped in. In 1997, the coalition government was ousted from power under the threat of violence partly because the Welfare Party’s coalition partner was intimidated by the military.

The executive presidency will help Turkish democracy to defend itself against outside interventions.

At the same time, it is important to acknowledge that weak coalition governments have proved unable to successfully manage the economy and create a favourable environment for foreign direct investments.

We were able to implement structural reforms with relative ease because Turkey has been governed by a single-party government since 2002. The proposed changes will ensure long-term political stability and, by extension, further strengthen the Turkish economy.

Al Jazeera: What sort of a future do you foresee for Turkey in the case of a “No” vote which would make the country stay with the current system?

Kalin: I don’t want to speculate or answer a hypothetical question. What I can say right now is that we expect the majority of voters to support the proposed changes on April 16. But it is important to remember that Turkey has strong political institutions and a lot of experience with democratisation.

The Turkish people know why it is imperative for certain changes to become firmly institutionalised and understand that we cannot defend our democracy against attacks if we do not take certain steps right now.

Obviously, though, the people will have the final say on the matter.

Al Jazeera: Western governments – and some of the opposition parties – say that creating a powerful presidency is an attempt by Turkish President Recep Tayyip Erdogan to establish a one-man rule. What would you say about this?

Kalin: This criticism is completely unfounded. The proposed changes, if adopted, will strengthen the separation of powers, give the parliament unprecedented powers to investigate the president’s actions and, if necessary, call for an early presidential election as a last resort.

The president, moreover, cannot call for early elections if he or she is being investigated by the parliament. Until now, the president enjoyed near-complete immunity – unless he was charged with treason. People should read the proposal and understand what steps are being taken to strengthen checks and balances before jumping to conclusions.

Al Jazeera: Do you think the referendum, being held the under the state of emergency, will cause doubt over the transparency of the vote, making fraud easier? During the clashes between the army and the PKK in southeastern Turkey, many people temporarily left the region. Do you think these people will be able to vote?

Kalin: The state of emergency went into effect after last summer’s failed coup and it has been used to address national security threats. As you know, similar measures have been taken in France in the wake of terror attacks and the presidential election will be held under the state of emergency.

To ensure transparency, we extended official invitations to international observers to monitor all aspects of the referendum. In addition to representatives from various political parties, certain non-governmental organisations are mobilising volunteers.

The security operations have no influence on the ability of voters to participate in the referendum. As always, there was a period for voters to change their residential addresses. We do not expect any problems whatsoever.

Al Jazeera: The Nationalist Movement Party (MHP), that previously opposed the executive presidency, now backs the AK Party’s bid. Does this hint to a more thorough alliance between the two parties in the future, where MHP seniors likely to take roles in the potential executive presidency of Erdogan?

Kalin:I can’t speak for either political party but it would appear that the MHP leadership revised their position in the wake of the failed coup. My sense is that they developed a better understanding of the national security threats our country is facing and agreed that the proposed changes could make Turkey more resilient against them.

Al Jazeera: The Turkish-EU relations have been tense for some time now, with both sides blaming each other over issues such as the stalemate in membership talks, democratisation of Turkey, refugees and visa-free travel for Turks. The recent row over Turkish ministers’ referendum campaign visits to the Netherlands and Germany has taken it to another level. What should we expect from the future in terms of bilateral relations? Is Turkey divorcing from the EU, as many in the West suggest?

Kalin: The idea that Turkey and the European Union are equally responsible for the current tensions is misleading. Several European governments continue to provide a safe haven to terrorist groups, including the PKK and FETO, that are responsible for killing innocent people in Turkey.

In recent weeks, they also violated diplomatic conventions to detain Turkish diplomats and officials in addition to meddling in the referendum by openly siding with the “No” campaign. By contrast, Turkish officials simply wish to meet with Turkish citizens abroad and inform them about the proposed changes – something that European politicians do in Turkey.

The situation could improve if Europe stops appeasing right-wing extremists, harbouring terrorists and refrains from further acts of aggression towards Turkey and Turkish citizens abroad.

The idea that Turkey is divorcing from the European Union is also a mischaracterisation of what is happening. If Europe’s idea of cooperation and partnership is for their partners to do their bidding, then they should start rethinking it.

Turkey is a NATO ally and an EU candidate country. But we are also a sovereign nation that will pursue its own goals and look out for its own interests. No partnership is a one-way street. This is a general rule that also applies to Turkey-EU relations. 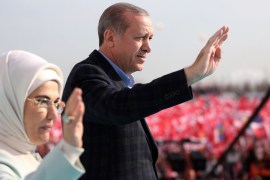