This is the first of a two-part series looking at the economic implications of the long-running dispute between South Korea and Japan.

Seoul, South Korea – There was apparently no suicide note, just a phone call to an acquaintance to say he was setting himself on fire because of his “hostility towards Japan”, according to South Korean police.

Authorities told news media last week that the 78-year-old man, who they only named as Kim, carried out the act while he was in his car parked outside the Japanese embassy in Seoul. He later died in hospital from his burns. His family said Kim had been conscripted as a forced labourer by Japanese forces while they ruled the Korean Peninsula from 1910 to 1945.

The anger felt by many Koreans towards Japan runs deep, even though more than 70 years have passed since the end of the occupation. And it periodically spills over into the social, political and even economic relations between the two East Asian neighbours.

Many South Koreans remain sore about Japan’s wartime use of forced labour by companies including industrial giant Mitsubishi Heavy Industries, and the sexual enslavement of so-called “comfort women” during those years.

The most recent wave of recrimination and retaliation stems from a ruling by South Korea’s highest court last year ordering Mitsubishi to compensate victims of forced labour.

But it has morphed into a broader dispute with overtones of national security issues and trade protectionism, and now threatens to disrupt South Korea’s crucially important chip-making industry, and the global supply of semiconductors and products like smartphones.

The timing could not be worse: the world economy appears set for an economic slowdown due to the much bigger trade dispute between the United States and China.

And some South Korean observers see parallels between Japan’s strategy against their key industries and the US’s invocation of national security concerns to address its large trade deficit with China.

Thousands of people marched in front of the Japanese embassy in Seoul on Saturday, some holding up signs saying “Against Japan’s economic retaliation against South Korea” and “No Abe”, referring to Japanese Prime Minister Shinzo Abe.

Many South Korean convenience stores and supermarkets have stopped selling Japanese cigarettes, beer and other consumer products. It is part of a broader boycott called by small business owners. Last week, they staged a protest outside a branch of Japanese clothing retailer Uniqlo. Some have even called for South Korea to skip the Tokyo Olympics in 2020.

“We want business owners to protest against the Japanese government’s actions by suspending sales [of Japanese products],” Hong Choon-ho, a policy officer at the Korea Mart Association, told Al Jazeera.

“The Japanese government doesn’t show a touch of remorse about the past, for Korea’s forced labourers or comfort women. There is a lot of anger among the Korean people about this,” said Hong. “Now they’re retaliating because of a decision by our Supreme Court.”

The dispute has swiftly turned into a complex diplomatic standoff, with trade and commercial interests being used as potent weapons.

Japan believes the matter had been settled under a 1965 treaty. It has denied that the restriction on chemical sales is a response to the South Korean court order. Instead, Japan cited what it describes as the “inadequate management” of sensitive items shipped to South Korea.

Japan’s restrictions mean that exporters now need to seek permission each time they want to ship these chemicals to South Korea, a process that can take up to 90 days.

The chemicals include fluorinated polyimides, used in smartphone displays; photoresists, used to transfer circuit patterns onto semiconductor wafers; and hydrogen fluoride, used as an etching gas for making chips.

But Japanese broadcaster NHK said some of these chemicals, especially hydrogen fluoride, were being shipped to other countries including North Korea, potentially for use in chemical weapons.

South Korea has denied making any such violations of its trade agreement with Japan, and Japanese officials have also steered clear of directly accusing Seoul of breaching sanctions against North Korea.

The World Trade Organization (WTO) has agreed to hear the dispute and US National Security Advisor John Bolton has also stepped in to try and resolve the differences between the two US allies.

‘Not a new phenomenon’

But Japan and South Korea have a long history of using trade as an arena in which to air their grievances.

“We need to see this tension in a more historical and industrial perspective,” Rhyu Sang-young, a professor of political economy at Yonsei University in Seoul, told Al Jazeera. “It’s not a new phenomenon. It has accumulated for about 30 years.”

After the massive earthquake and tsunami of 2011 destroyed Japan’s Fukushima nuclear plant, South Korea cited fears of nuclear contamination as its reason for banning fish imports from certain Japanese territories. The ban began in 2013 and was upheld by the WTO in April, prompting Japan to accuse South Korea of using trade as a retaliation tactic.

Earlier this year, Tokyo threatened to halt visa issuances for cross-border business, causing concern for firms working in both countries.

But the use of national security concerns as a means of influencing trade is a new development in the nations’ long-running disputes, something that Rhyu sees as echoing US President Donald Trump’s playbook.

“It is exactly the same [story] as Trump’s trade control and tariff war against China,” said Rhyu.

And much like the US-China trade war, a quarrel between the two tech-heavy economies could have global consequences.

According to the Organisation for Economic Co-operation and Development (OECD), semiconductors accounted for more than 17 percent of South Korea’s exports in 2017, making it the country’s single largest export industry. Their share of the country’s total exports has risen steadily since 2014.

South Korea is home to the world’s two biggest memory chipmakers, Samsung Electronics and SK Hynix, which in turn supply key components to the likes of Apple in the US and Chinese telecommunications equipment giant Huawei.

If Japan continues to choke off supplies and South Korea is forced to halt its shipments, “it will bring a huge disaster for IT manufacturers, including smartphones and PCs,” Song Myung-sup, an analyst at HI Investment and Securities in Seoul, told Al Jazeera. 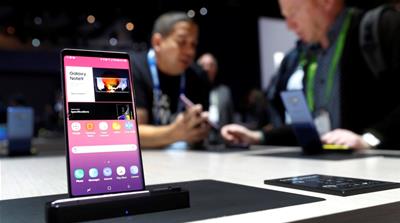 Chipmakers like Samsung Electronics and SK Hynix depend almost entirely on Japan for the supply of certain chemicals, which Japan is now restricting [File: Steve Marcus/Reuters]

In the short term, the uncertainty surrounding the supply of computer chips is pushing their prices up.

According to the Korea International Trade Association (KITA), the market price of DRAM chips for immediate delivery has risen by more than 23 percent in two weeks. And that, in turn, has driven the share prices of the top South Korean chipmakers higher.

“Customers are afraid of the possibility that Korean manufacturers will stop their [production] lines because of this ban. So they’re rushing in to buy,” said HI Investment’s Song.

But those benefits are expected to be short-lived.

Korean businesses can weather the storm for a while with stockpiled inventory – about three to four months’ worth of components, Song said. But after that, if Japan’s export restrictions are not lifted or if they are tightened, global electronics markets will feel the bite of South Korea’s frozen assembly lines.

While South Korea boasts numerous global trade surpluses, it has been in the red with Japan since 1965, when the two countries normalised relations after Japan’s colonial rule.

South Korea’s trade deficit with Japan stood at more than $24bn at the end of 2018 – the largest among its 250 trade partners, according to KITA. High-tech products like chip-making equipment make up the bulk of that shortfall, according to the Observatory of Economic Complexity at the Massachusetts Institute of Technology.

And South Korea imported 92 percent of its supplies of photoresist, 44 percent of etching gas, and 94 percent of fluorinated polyimide from Japan in the first five months of 2019, according to Korean trade statistics, indicating it is highly reliant on Japan.

But the buyers of electronic products are in turn very dependent on South Korea.

“If Japan really wants to give them a hard time, they can. No doubt about it,” said Sanjeev Rana, an analyst in Seoul at brokerage CLSA. “They wanted to minimise the harm to Korean production as well as make a point.”

South Korea is now looking for ways to hit back. President Moon Jae-in said last week he hopes for a diplomatic solution to the problem, but is prepared to take countermeasures if Tokyo forces his hand.

If Moon were to strike at Japan diplomatically or economically, he would likely find many South Koreans supporting him.

“With public sentiment in South Korea swinging towards some form of retaliatory measures, there is a danger that the trade frictions could escalate into a protracted trade war unless some negotiated compromise can be found,” Rajiv Biswas, chief economist for the Asia Pacific region at research firm IHS Markit, told Al Jazeera.