Ho Chi Minh, Vietnam – A new policy for Asia that President Donald Trump is expected to bill at a summit in Vietnam will do little to assuage mounting concerns about US commitment to a region increasingly weary of his capricious and erratic diplomacy, analysts say.

At the Asia Pacific Economic Cooperation (APEC) Summit in Da Nang, Vietnam, starting on Friday, Trump will promote the vaguely defined concept of a “free and open Indo-Pacific region”. Japan first floated this idea, tailored to push the United States to coalesce three other maritime democracies – Japan, Australia, and India – to contain a rising China.

In the words of American officials, this sales pitch is aimed at demonstrating the Trump administration’s commitment to the Indo-Pacific region. It also seeks to deflect criticism on Trump’s fixation with North Korea during his 12-day, five-nation Asia tour.

But still, it remains a tough sell to many.

“The idea of a ‘free and open Indo-Pacific’ under the Trump administration is the antithesis of most everything Trump has promoted,” said Dennis C McCornac, an economics professor at Loyola University Maryland in Baltimore. “The only support for an open region is the flow of military equipment to those who seem to support efforts to counter North Korea and China,” McCornac said.

“Trump trying to convince others that he supports a ‘free and open Indo-Pacific’ would require the same type of ‘snake oil’ sales job that Trump used with his so-called university, his wall that Mexico will pay for as well as his other campaign promises that turned out to be completely false.”

While “Indo-Pacific” could be considered another catchphrase to supplant former US president Barack Obama’s “pivot to Asia”, Trump has used his “America first” policy to take a sledgehammer to the legacy built by his predecessor in the region. Chief among his moves is withdrawal from the Trans-Pacific Partnership (TPP), a mammoth US-led trade deal whose 12 members make up nearly 40 percent of global GDP.

“Trump’s immediate scrapping of the TPP did much to cast a lot of doubt on whether the US was going to lead a norms-based order in the Asia Pacific,” said Zachary Abuza, a Southeast Asia analyst at the National War College in Washington.

As Trump’s “America first” has galvanised him and his administration into scrapping trade agreements, eschewing diplomacy and antagonizing allies, the “Indo-Pacific” policy is nothing but “basically his insistence on rewriting bilateral trade agreements, and eschewing multilateral agreements”, Abuza said.

“After what Trump has done to almost every major agreement concluded by President Obama or his predecessors, what country in their right mind would trust the United States to live up to its commitment?”

Trump had even planned to skip the East Asia Summit, a key gathering of Southeast Asian leaders in the Philippines on November 13. He only made a last-minute change to attend it apparently at the request of other leaders.

But still, his initial decision to skip it probably did lasting damage, analysts say.

“He’s only now going because aides had to explain to him the importance of showing up and the signal that it would send if he didn’t. But it does not disguise his own antipathy,” he said.

“So if it’s an attempt to make the US look more reliable to friends and allies, it’s a weak one especially following his scrapping of the TPP.”

A survey in March by the Iseas Yusof Ishak Institute in Singapore that polled government officials, business representatives, academics, and journalists in Southeast Asia found about 75 percent of the respondents saw China, not the US, as the most influential player now on the international stage and into the next decade. Two-thirds of respondents also viewed the US less favourably than four months ago, according to the survey.

This is the context in which the Trump administration is closer to retreating from a region that China is salivating at marching on with its expansionism stratagem, analysts say.

“China has already stepped up its economic and strategic initiatives to fill the perceived vacuum left by the Trump administration in the region,” said Le Hong Hiep, a research fellow at the Iseas Yusof Ishak Institute in Singapore.

Beijing’s initiatives – such as the $900bn “One Belt, One Road” infrastructure initiative, or the Asian Infrastructure Investment Bank – have been sold quite well to most regional countries. Meanwhile, China has continued to bolster economic largesse to many Asian nations – most of them in Southeast Asia – capitalising on their uncertainty about the Trump administration’s intent.

“China has been the primary beneficiary of the United States’ withdrawal from the international order and institutions that it has created and nurtured since the end of World War II,” Abuza said. “We have handed much to China at a time when it has the cash in the political and diplomatic interests in asserting itself.”

But at the end of the day, analysts say, history has shown that very little in terms of policy has ever come out of APEC summits. While the leaders have tried to present a sense of unity among the member countries, it is often more remembered for the native shirts the leaders show in the group photo.

“In the past, however, the leader of the US has always presented himself as being presidential and in command of the facts about Asia,” McCornac said.

“Trumps seems to have little concern for educating himself about this region, which will only serve to enhance the lack of confidence in the US’ commitment to this region,” he said.

It is in this context that Asia appears increasingly determined to forge ahead without American leadership. 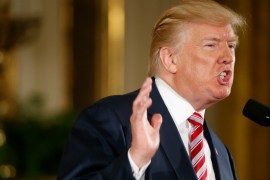 US president’s engagement with the rest of the world a mix of ‘America First’, domestic pandering and ego.