Demonstrators are facing tear gas, stun grenades and rubber bullets in ongoing clashes in the US city of Ferguson, Missouri between protesters and the police. The protests started following the shooting and killing of an unarmed black teenager by a white police officer, who authorities say stole a $49 box of cigars. The clashes are raising questions about the militarisation of law enforcement in the country. According to Congressional records, since September 11, 2001, police departments have spent nearly $34 billion on military grade weaponry. But is there a need for such a police force? Join the conversation at 1930GMT.

On this episode of The Stream, we speak to:

What do you think? Leave your thoughts in the comments section below. 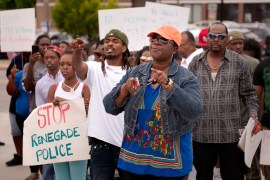 ‘If they gunned me down, what photo would you use?’ 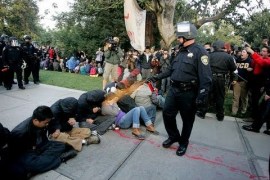 The growing militarisation of police

Is access to military-grade weapons changing the mentality of crowd control?