Late Friday night, the Polish parliament completed the adoption of a set of laws that amount to the executive taking control of the judiciary. The Constitutional Tribunal, the highest appeals court, and the body responsible for appointing judges – all three – will be largely in the hands of the ruling nationalist Law and Justice Party (PiS), when these laws come into effect.

Technically, Polish President Andrzej Duda can still veto the laws. A few days ago, he asked that one of the laws be changed, calling for a larger parliamentary majority than that initially proposed by PiS to dictate changes to the body appointing judges.

It’s unclear whether Duda’s gesture was part of a larger PiS calculation to appear compromising to the protesting crowds, or an attempt by the president to gain political capital by resisting unpopular laws. So far, Duda has been a faithful PiS soldier. While tens of thousands protested this week, he went on vacation to the seaside (the demonstrators marched to him on his resort on the Baltic Sea coast anyway).

Ever since it came to power in the fall of 2015, PiS has been systematically dismantling the rule of law. The first step was attacking the powers of the Constitutional Tribunal just a month after taking power, followed by monopolising state bureaucracy, state media and the military, and now moving on to the rest of the justice system. Critics say opponents of the regime will lose the right to fair trial, making politically motivated harassment – if not repression – possible. PiS is likely to change the electoral law, too, to increase its chances of winning another mandate.

Poland has seen large demonstrations in opposition to PiS since its takeover of the Constitutional Tribunal, but they never coalesced into a serious challenge to the governing party.

Organised mainly by the Committee to Protect Democracy (KOD), they were driven by the “Solidarity generation” that fought communism in the 1980s, alarmed at the early signs of democracy withering away. They were numerous, but lacked political influence.

The sole instance PiS seemed seriously intimidated by protests was when Polish women took over the fight.

Last year, the women’s Black Protest (Czarny Protest) forced PiS to step back from a law that would have made abortion almost entirely illegal (Poland already has one of Europe’s strictest abortion laws).

In the last two weeks, with PiS working to finalise its control of the judiciary, popular resistance has taken on a different character. Unlike in KOD demonstrations, this time around there’s a lot of youth in the streets. There’s more diversity in the protests, with various force – from the main opposition parties to feminists and the alternative left calling people to the streets – gathering under the pro-democracy banner.

And there’s more energy in the streets: Protesters move from one institution to another and stay out on the streets late into the night. Friday evening, while the Polish Senate was voting the last piece of the legislative puzzle that would suffocate the independence of the judiciary, people stayed outside the building all night calling out each senator by name and shouting to them, “You can do it!” (You can vote against the law).

Recent polls show that a majority of Poles would like the president to veto the judiciary laws. But, at the same time, support for PiS remains high, with close to 40 percent of people saying they would vote for them – a percentage similar to that which brought the party to power. PiS violating the rule of law does not seem to dissuade most of its electorate.

For the last decade, in power and opposition, PiS has been propagating the idea that the post-1989 liberal democracy is illegitimate.

The reasons for this unwavering support are generally known in Polish society. PiS is following a nationalistic recipe that’s proved popular around the world, from the United States and UK to Hungary: They are using socioeconomic woes and instigating fears to control the people.

Poland may be known in the West as the success story of post-communist transition, but it’s  also the country with the largest percentage of workers on precarious contracts in Europe, where working families often cannot afford to pay housing or basic living costs.

For the last decade, in power and opposition, PiS has been propagating the idea that the post-1989 liberal democracy is illegitimate. According to their paranoid reading of reality, concocted by PiS leader Jaroslaw Kaczynski and supported by right-wing elites hungry for a piece of the pie, communists continued to control power in Poland after 1989, which is allegedly why things are not going the right way for the Polish people.

In the same vein, PiS coming to power was “a victory” of the Polish nation against its oppressors – communists, liberals, leftists (all of them mashed together) and their Western allies. It’s a reading of reality that has been built up meticulously, using historical denialism and symbolic rituals, with the help of Poland’s prodigious right-wing media and part of the powerful Catholic Church. It gives grounds for PiS to implement regime change – get rid of liberal democracy in the name of the Polish nation.

Even if some of PiS’ voters might be bothered by its assault on the judiciary, there is no viable alternative for them on the Polish political scene. One of PiS’s trademark measures has been giving a monthly payment of over $100 to families with more than one child (that translates into better shoes, summer camp or much needed private doctor visits). The policy proved quite popular with the electorate, while no major  opposition party supported any measures benefitting the poor.

These days the leaders of the two main centre-right opposition parties, Civic Platform and Modern (Nowoczesna), are trying hard to position themselves as heads of a united opposition against PiS.

But there is increasing resistance to that in the streets. There’s increased recognition that parties like Civic Platform, which have been in power repeatedly since 1989, have contributed to the division of Polish society between liberals and PiS supporters. Unlike in 2016, when KOD welcomed the centre-right opposition to its demos, no party logos are accepted at most protests this time around. In society at large, there’s a sense of expectation that someone else will emerge as a leader – a fresh figure, potentially more inclusive.

The survival of democracy in Poland is at stake. At a time, where Hungary’s Viktor Orban is no longer a freak but a leader illuminating the path to “illiberal democracy” for others, the Polish people will find it that much more difficult to fight for it unless they figure out a way to overcome their divisions. An effective leader of the opposition will have to care about PiS voters too. 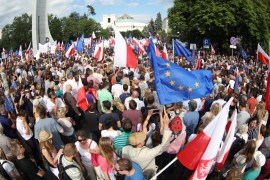 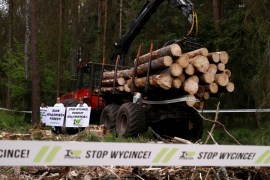 In the post-truth era, Polish government is trying to convince us that it needs to chop down a forest to protect it.