Americans love their guns, as any good historian will tell you. Following the recent Orlando, Florida murders, in which some 50 patrons of the Pulse Bar were shot dead by a rifle-toting assailant, United States news outlets described the tragedy as “the largest mass shooting in American history”.

That was true, but only if you counted its most recent predecessors – at Virginia Tech University (32 dead), at Sandy Hook Elementary School (27 dead, including 20 children), in San Bernardino (14 dead), in Charleston (nine dead), and at Columbine High School in Colorado in 1999, in which two teenagers massacred 12 of their fellow pupils and one teacher.

In truth, the competition for the mother-of-all mass shootings predates the Columbine killings, which stands as a kind of modern talisman of what ails the US.

The murders spawned a popular movie, Bowling for Columbine and three bestselling books.

But, despite their horrific toll, Orlando and Columbine – and Virginia Tech, Sandy Hook, San Bernardino and Charleston – are not that unusual.

The Wounded Knee Massacre claimed the lives of at least 150 American Indians in 1890, white mobs bludgeoned and shot 100 African Americans in East St Louis in 1917, and more than 50 others were murdered in a race riot in Tulsa, Oklahoma in 1921.

That is to say, the “largest mass shooting” in the US history was the “largest” but only so long as you don’t count Indians and African Americans.

Or worse: in 1967, President Lyndon Johnson wanted to deploy the 82nd Airborne Division to Vietnam, but couldn’t – because it was needed in Detroit, where rioting killed 43 and burned out large parts of the city.

The riots, which looked more like an uprising, were broadcast live on national television, but they quickly subsided, allowing Americans to return to their daily fare of watching US bombers dropping napalm on Vietnamese villagers.

The new level of absurd

Not surprisingly, the Orlando killings have widened the disagreement between Democrats and Republicans about how to end this latest spate of “spectacle killings” – as they have been dubbed – with progressives arguing for stricter gun laws.

The Orlando gunman’s easy access to a rifle, they say, made it easy for him to carry out his murderous spree, while conservatives defend the Constitution’s Second Amendment, giving Americans the right to own guns.

The prospect of gun owners joining in an anti-gun crusade seems a fantasy, but that will change if gun manufacturers see their profits disappear.

The disagreement is a chasm.

Just this week, the Senate voted down four attempts to control gun purchases, including a bill that would have barred those on the US terrorist watchlist from buying a rifle.

Some of this debate has reached the level of the absurd: People suspected of having terrorist ties can’t get on a plane, but they can walk into a gun shop and buy a Sig Sauer MCX rifle, the weapon of choice for the Orlando gunman.

The debate is as perverse on the other side. Statistics show that banning assault rifles would have a marginal impact on gun violence, which is fuelled primarily by handguns.

Just two weeks before Orlando, 64 Chicago residents were shot in three days of gun violence, the vast majority from handguns. One mother said that she was happy her son was in prison, because he would have been killed if he had been on the streets.

The Orlando murders will be front-and-centre during the upcoming national election, which doesn’t mean that the issue will be resolved. It won’t.

Rather, Hillary Clinton and Donald Trump will score debating points with their supporters by mouthing predictable positions.

Clinton will say that Trump is in the pocket of the gun manufacturers; Trump will claim Clinton is an enemy of freedom. Neither will tell voters what is obvious – that a legislative solution to the problem is out of reach. The country is too divided.

But that doesn’t mean the issue won’t be resolved. American history is replete with examples of how divisive social problems are successfully solved.

It’s happened before. The abolitionist, temperance and public hygiene crusades stigmatised slavery, public intoxication and spitting in the streets – ubiquitous in the US cities until the 1950s.

Most recently, distilleries proved no match against Mothers Against Drunk Driving (MADD), who were enraged that US highways were being turned into the equivalent of a demolition derby.

OPINION: The hate behind the Orlando massacre

These crusades had three things in common: They were led by women, aimed at men, and succeeded in the face of political paralysis.

There is no guarantee the same will happen now, but the signs are there. A recent report cited “Moms Demand Action for Gun Sense in America” (MDA), as the National Rifle Association’s “worst nightmare”.

MDA lobbies for gun control, stigmatises gun use, boasts a membership of 1.5 million and successfully lobbied Target stores, the nation’s fourth largest retailer, to announce that firearms were no longer welcome in its stores.

That victory, though modest, shows that stigmatisation works. While gun sales have doubled over the past two decades, gun homicides have actually been cut in half since 1993.

The prospect of gun owners joining in an anti-gun crusade seems a fantasy, but that will change if gun manufacturers see their profits disappear.

That is to say, pro-gun groups are gambling that they’ll be able to overcome a nation of enraged women whose political ancestors scored political victories over slaveholders, brewers and tobacconists. As history shows, that’s a poor bet. 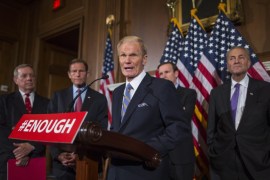 Senate rejects measures by Republicans and Democrats to stem gun violence after worst shooting in modern US history. 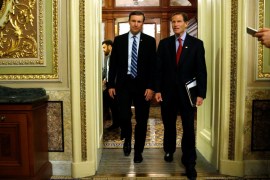