For today’s celebrity baby, baby photos and sonograms are passé.  Instead, the baby needs his or her own “retweet network” picture, and we at the NYU Social Media and Political Participation laboratory are happy to provide this indispensable gift for the new #royalbaby Windsor (for higher resolution versions of the figure, click here or here.): 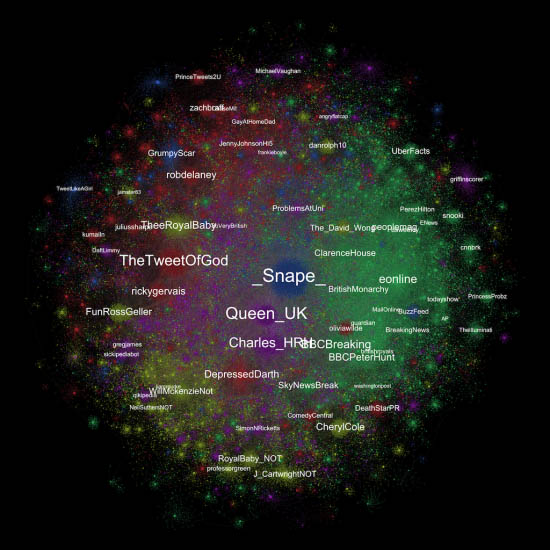 What can we learn about Twitter and the #royalbaby from this figure? When faced with a high profile but essentially low consequence event (unless you were betting on the baby’s arrival), Twitter was drawn upon to do what it seems to do best : provide information and entertain people. Our best guess at the various networks in this figure (and this is a very dense set of networks due to the huge volume of tweets – there are half a million Twitter users displayed on this plot!) are the following:

The most popular retweets also confirm this rough dichotomy of news and humor. The most popular tweet of all was from none other than Harry Potter potions professor Severus Snape:

Dear William & Kate: If William is 100% royal and Princess Kate is 0% royal, will that make your son a half-blood prince? #RoyalBaby

And by our count, of the top 10 most popular retweets, seven were humor or satire related and the remaining three were news. The BBC  was the highest ranked news source, with 10,300+ retweets, and came in at the fifth spot, beating out the official announcement from Clarence House , which placed sixth with 6,600+ retweets. The remaining news source in the top 10 retweets: E! Online (an American entertainment website), which placed tenth with 5,800+ retweets. And for those Harry Potter fans out there, Snape also grabbed two more spots in the top 10 ( second and eighth );  Lord Voldemort  himself finished just outside the top 10.

Was this event truly a global social media phenomenon? With the caveat that we only have access to Twitter data and thus can not comment on activity on other platforms such as Facebook, Weibo, or Google+, there are a couple different ways we can address this question. First, we can examine the sheer quantity of Tweets devoted to the keyword #royalbaby, which of course underestimates the total number of tweets discussing the royal birth because not everyone was using this hashtag. For comparison’s sake in the following figure, we compare tweets with the hashtag #royalbaby with tweets that featured the hashtag #direngeziparki – the main hashtag in the recent Turkish protests  – on June 1st. 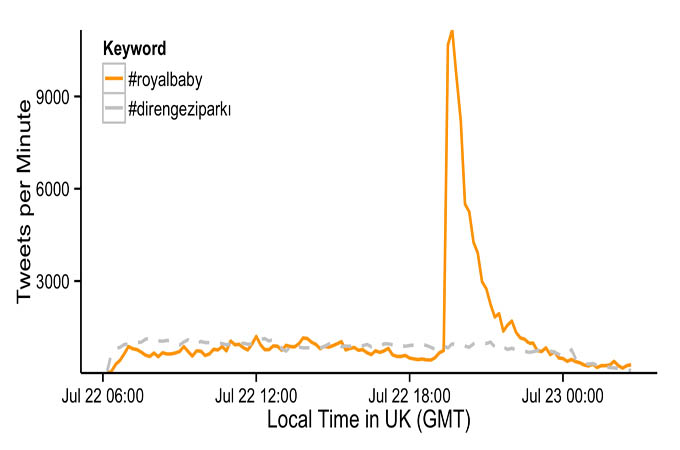 Three observations can be made from this figure. First, from the moment the news first broke that the Duchess was heading to the hospital, there was a very stead stream of constant twitter usage of #royalbaby – something on the order of close to 1000 tweets per minute; using a larger number of keywords, we were collecting about 1500 tweets per minute at this time. Second, there was – as would be expected – an enormous spike in tweets immediately following the birth. *

This demonstrates yet again the power of Twitter to convey information to vast numbers of people in an almost instantaneous fashion. While in this case it was all basically in fun, the political consequences of such a powerful distribution network for information that can be accessed by the masses and elites alike should not be underestimated. Finally, for all the hype surrounding the royal birth, the sheer number of tweets for most of the day featuring the key hashmark for royal baby watching does not really seem to exceed by much – if at all – the key hashtag used in a single day of protesting in Turkey. Whether this says more about the Turkish protests or royal baby-watching remains to be seen.

The other way to use Twitter to assess the degree to which the royal birth was truly a global event is to look at the extent to which the hashtag #royalbaby was used around the world, which we do in the following figure. Again caution is in order, as one needs to interpret this figure through the lens of where Twitter is used globally : 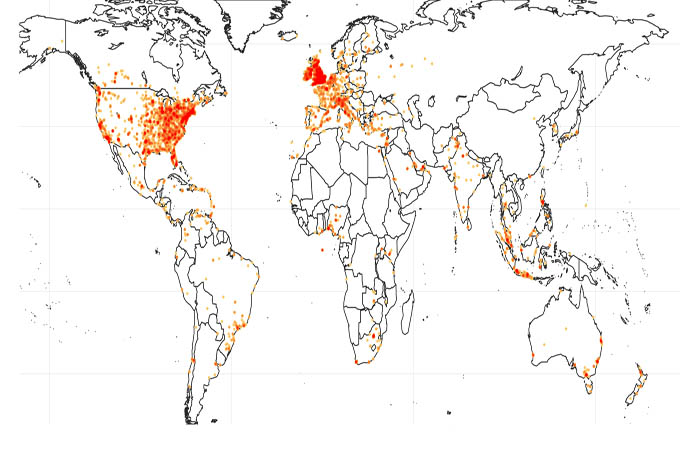 With these caveats in mind, two conclusions seem apparent. First, this was a global social media event. People did tweet about the birth all over the world, although clearly there was more interest in some countries (especially in Europe) than others. Second, Americans – despite their decision to fight a war to free themselves from the control of the British crown – still remain quite interested the royal family!

* For the Twitter geeks out there, you will notice that our chart peaks at somewhere around 10,500 tweets per minute, while Twitter itself reported a top rate of 23,500 tweets per minute.  You will also notice that at the very peak, our line appears to go flat briefly.  We think both are caused by the same fact, which is that there is a limit to the number of tweets you can collect from Twitter’s API when you search by particular keywords, which is what we were doing.  This limit is 1% of all tweets.  If your keyword search is returning less than 1% of all tweets, you get all of them.  But if it returns more than 1%, you max out at 1%. This is why we think our top-line number is significantly less than Twitter’s number: for a brief period of time, tweets related to the royal birth seem to have been exceeding that 1% limit.