At least five people have died and 60 others were injured by a powerful earthquake in the northern Philippines, according to authorities.

The 8:43am (00:43 GMT) quake on Wednesday struck the mountainous and lightly populated province of Abra on Luzon, the country’s main and most populous island, causing small landslides and collapsing some houses. The tremors caused high-rise towers to shake more than 400km (249 miles) away in the capital, Manila, which is located on the south of the island.

The earthquake was measured at a preliminary magnitude of 7.1 by the US Geological Survey (USGS), 7.2 by the European Mediterranean Seismological Centre (EMSC) and 7.3 by the Philippines Institute of Volcanology and Seismology (Phivolcs).

Phivolcs later revised the magnitude down to 7.0. Still, the earthquake was strongest to have hit the Philippines in years.

Those killed included a man who was hit by falling cement slabs in his house in Abra, where at least 25 others were injured and were mostly confined in hospitals, officials said.

A construction worker was also hit by debris and died in the strawberry-growing mountain town of La Trinidad in Benguet province, where some roads were shut by landslides and boulders.

President Ferdinand Marcos Jr, whose home town is in the northern Philippines, ordered rescue and relief teams to be sent to Abra, and was initially planning to fly to the affected area, but later said he would hold off on the trip as not to disrupt the emergency respones.

USGS said the earthquake’s epicentre was about 11km (7 miles) east-southeast of the town of Dolores.

Pictures shared on social media by local officials and residents showed some buildings completely collapsed, with others leaning precariously, their windows shattered.

Some cars were crushed by the debris and roads left crumpled and damaged.

Eric Singson, a congressman in the northern Ilocos Sur province, told DZMM radio: “The earthquake lasted 30 seconds or more. I thought my house would fall”.

“Now, we are trying to reach people. … Right now there are aftershocks so we are outside our home,” he added.

Elsewhere in Abra province, a hospital was evacuated after the building partially collapsed.

“We are still experiencing aftershocks. We have received reports of damages to houses. But so far no casualties,” said Mayor Rovelyn Villamor in the town of Lagangilang.

“We don’t have power supply because that’s automatically cut off due to danger,” Villamor told DZRH radio.

In Vigan City, in the nearby province of Ilocos Sur, centuries-old structures built during the Spanish colonial period were damaged. Video shared on Twitter and Facebook showed the city’s Bantay Bell Tower beginning to crumble as onlookers flee.

The Philippines Red Cross said its teams on the ground were assessing damage in the affected communities. 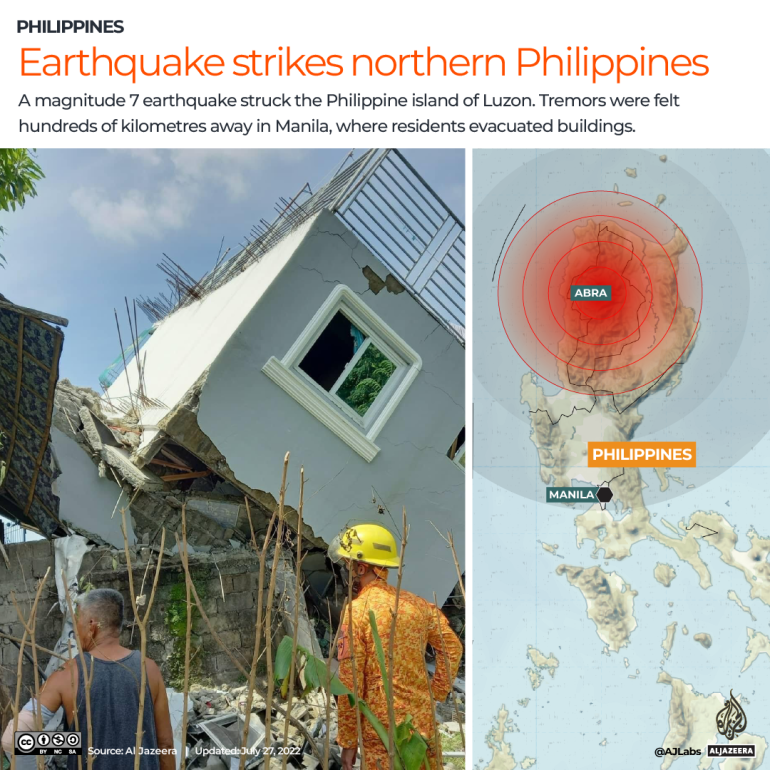 In Manila, service on the city’s metro rail systems was temporarily suspended after the earthquake, while the Senate and many high-rise office buildings and residential towers were also evacuated.

“People were already on the streets. They were in traffic, on their way to work or already in their offices,” said Al Jazeera’s Barnaby Lo who is in the capital. “This was an earthquake that was felt by millions of people – not only those in the northern Philippines.”

People in Manila were allowed to return to their homes and offices after they had been checked by officials.

Several houses and infrastructures in different locations are severely damaged after a 7.3 magnitude #earthquake shook #Luzon this morning.

The Philippines is located on the Pacific “Ring of Fire”, a 40,000km (25,000-mile) arc of intense seismic activity that stretches from Japan through Southeast Asia and across the Pacific basin.

In October 2013, a magnitude 7.1 earthquake struck Bohol Island in the central Philippines, killing more than 200 people and triggering a number of landslides.

Nearly 400,000 people were forced from their homes as a result of the disaster.