The death toll from a magnitude 7.2 earthquake that struck the central Philippine islands of Bohol, Cebu and Siquijor has risen to 144, as rescuers struggled to pull out people trapped under collapsed buildings.

At least 97 people have died in Bohol Province, while nine were confirmed dead in neighbouring Cebu Province and one in Siquijor Island, according to the Provincial Disaster Coordinating Council of Bohol.

Tuesday’s earthquake was centred 56km deep below Carmen town on Bohol Island, about 400km southeast of the capital, Manila, and was felt across the region.

According to the local seismology agency, there have been 413 aftershocks recorded. Both the islands of Bohol and Cebu have already been declared under “state of calamity”.

Tuesday was a national holiday and that may have reduced casualties because schools and offices were closed.

Al Jazeera’s Jamela Alindogan, reporting from Siquijor Island, said school buildings had collapsed in Bohol and that the government was assessing the damage and sending out rescue teams from other outlying islands.

About 118 people injured in the quake are being treated at a local hospital in Tagbilaran, capital city of Bohol.

All patients of the hospital were transferred to the open ground, fearing building collapse, Ligalig said.

Bohol has 1.2 million people and is popular among foreigners because of its beach and island resorts.

A 17th century stone church in Loboc, a town southwest of Carmen, crumbled to pieces, with nearly half of it reduced to rubble.

Robert Poole, an arts journalist from Tokyo who was holidaying in Bohol, told Al Jazeera that there were no casualties at the site possibly because of the national holiday.

“The mayor of the town has set up a command centre just in front of the collapsed church and people have gathered under temporarily set up white tents for them to go to and get information,” he said.

Other old churches dating from the Spanish colonial period, which are common in the central region, reported damage too.

Edgardo Chatto, Bohol’s governor, said that a church was reported damaged in Tagbilaran and a part of the city hall collapsed, injuring one person.

Joseph Emilio Abaya, the Philippine transportation secretary, said in a radio interview that parts of the Tagbilaran port had cracked and collapsed.

Meanwhile, in Cebu, among the casualties were four children, who were killed after a stampede, according to Dinky Soliman, the Philippine social welfare secretary.

At least 19 were injured when the roof of a market in Mandaue collapsed, according to television reports.

At least two tall buildings collapsed and other buildings, including a church and former town hall, were damaged.

Cebu, about 570km south of Manila, has a population of more than 2.6 million people.

Earthquakes are common in the Philippines, which lies along the Pacific Ring of Fire. 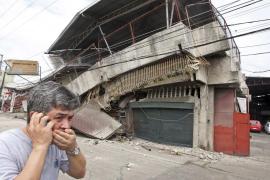 At least 107 killed and buildings and churches damaged on Bohol Island and nearby Cebu province by 7.2 magnitude quake. 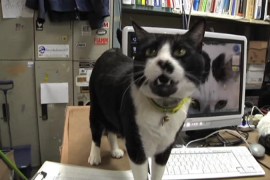 Japanese researchers investigate claims that animals can sense changes when ground is about to shake. 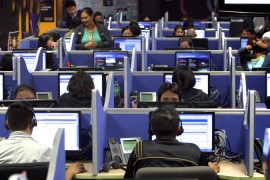 Phoning from the Philippines

The Philippines is emerging as a great outsourcing nation for cost efficiency, but are there limits to its success?