The war in Ukraine massively intensified during its eighth week. Ukraine sank Russia’s flagship in the Black Sea, Russia launched a new phase of the war with a concerted bid to take over the eastern regions of Luhansk and Donetsk, and the United States began to ship heavy artillery to Ukraine.

This military escalation stood in contrast to the lack of diplomatic or economic developments. Russian-Ukrainian talks have stalled and the West has stopped escalating sanctions, instead shipping more weapons to Ukraine.

“This morning, almost along the whole front line of Donetsk, Luhansk and Kharkiv regions, the occupiers attempted to break through our defences,” said Oleksiy Davilov, secretary of Ukraine’s national security council, told Ukrainian media on April 18. “Fortunately our military is holding out. They passed through only two towns – Kreminna and another small one.”

Russian attacks were reported along a 500km (300-mile) front. In the area of Kharkiv, Ukrainian forces retook the towns of Bazaliivka, Lebyazhe, and Kutuzivka, as well as smaller villages, in a counteroffensive begun on April 16. Ukrainian counterattacks also continued just west of Kherson, in the southwest of the country.

Days earlier, the US announced an $800m tranche of military equipment deliveries to Ukraine, bringing its total delivered so far to $2.5bn. For the first time, the US is providing armoured personnel carriers and 155mm long-range howitzer artillery for the defence of Ukraine’s eastern Donbas region, along with 40,000 artillery rounds. Also included will be 11 Soviet-designed Mi-17 helicopters.

Russia’s deep resources suggest time is not on Ukraine’s side. Yet many observers say Russia cannot press its natural advantages of proximity to the theatre of war and numerical superiority in arms and men.

“The Russians could overwhelm the Ukrainian defenders by the sheer number of different axes of advance, forcing the Ukrainians to spread themselves too thinly. But the Ukrainians’ demonstrated will and ability to hold much larger Russian forces at bay in built-up areas for a considerable time suggests that many if not most or even all of these Russian drives will stall,” said a report from the Institute for the Study of War on April 16.

Morale is a major problem for Russia. Some of the units brought to the Donbas were evacuated from Kyiv after suffering heavy losses. “Frequent reports of disastrously low Russian morale and continuing logistics challenges indicate the effective combat power of Russian units in eastern Ukraine is a fraction of their on-paper strength in numbers,” said the study.

Dramatic developments also took place in Mariupol, a symbol of Ukrainian resistance, which is also key to linking up Russian forces in the Donbas and the Crimea.

Russian forces stormed the Ilyich metallurgical plant on April 13 but failed to encircle its remaining defenders, who escaped to the adjacent Azovstal steel plant. Russia has tried sticks and carrots, pounding Azovstal with bunker-busting bombs, and offering safe passage to an estimated 2,500 men still fighting.

“Taking into account the catastrophic situation at the Azovstal metallurgical plant in the city of Mariupol, from 14:00 [Moscow time] on April 19, 2022 the Russian armed forces have opened a humanitarian corridor for the withdrawal of Ukrainian servicemen and militants of nationalist formations who voluntarily laid down their arms,” the Russian defence ministry’s statement said.

The commander of Ukrainian forces, Major Serhiy Volyna, told the Washington Post his men will not surrender but will continue to conduct their operations as directed, because no one trusts the Russians not to open fire on surrendering troops. Meantime, the outnumbered and outgunned garrison continued to defy the Russians with limited counterattacks.

Russia’s defence ministry said 1,026 Ukrainians from the 36th Marines Battalion had surrendered, but Petro Andryushchenko, an adviser to the mayor of Mariupol, told the BBC that fewer than 200 marines had surrendered. “It’s wrong, the numbers of course,” he said. “Some marines have surrendered, but it’s not a thousand, it’s … some less than 200.”

On April 16 Ukraine said fighting was escalating in the port. “The Russian army is constantly calling on additional units to storm the city,” Ukrainian defence ministry spokesperson Oleksandr Motuzyanyk told a televised briefing.

“In Russia it was once again said that their so-called ‘special operation’ is supposedly going according to plan. But, to be honest, no one in the world understands how such a plan could even come about,” Zelenskyy said in a video address. “How could a plan that provides for the death of tens of thousands of their own soldiers in a little more than a month of war come about? Who could approve such a plan?”

Could it get worse?

“The Russians are concentrating their efforts on eastern Ukraine, a shift that could indicate their interest in negotiating from a position of strength, or the partition of Ukraine so that they can directly control the Donbas, the coastline – including places like Mariupol and Odesa – and much of what lies east of the Dnieper River,” Alonso-Trabanco told Al Jazeera, expressing his personal opinion.

However, if even partition fails, he said he believes the war could become one of complete annihilation.

“If the Russians are unable to reach a quick victory and this military intervention becomes a long war, then Moscow could likely refocus its efforts and capabilities towards the outright dismantlement of Ukraine as a functional national state,” said Alonso-Trabanco.

“That would entail the massive obliteration of infrastructure, territorial fragmentation, political and economic instability and an even larger exodus of population,” he said. “A country under such chaotic conditions can’t have a viable future.” 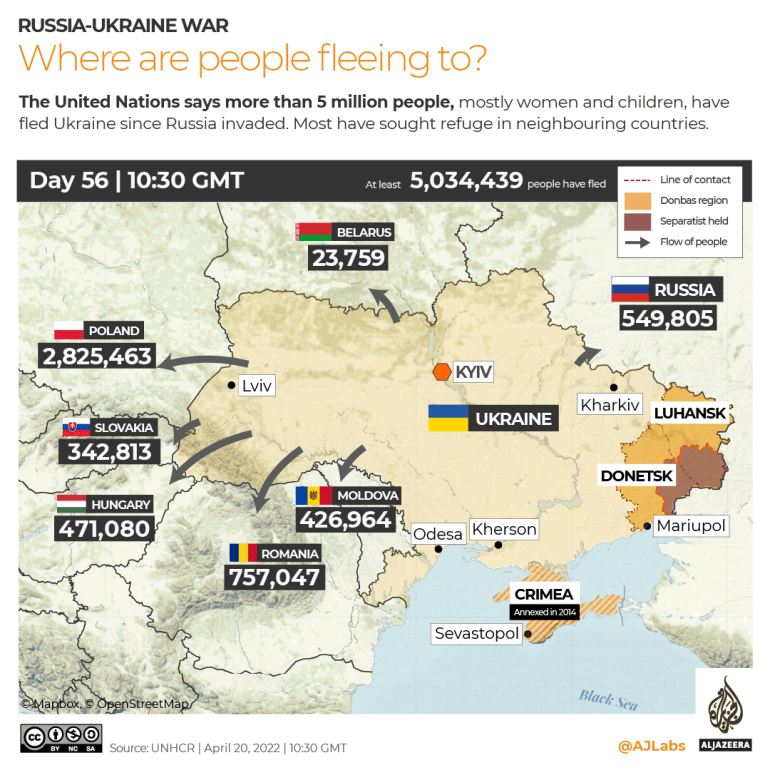