United States President Joe Biden will host Iraqi Prime Minister Mustafa al-Kadhimi at the White House on Monday, the latest step in weeks of “strategic dialogue” over the future of US troops in Iraq, attacks by Iran-aligned groups, and fears of a resurgence of ISIL (ISIS).

At the top of the agenda for al-Kadhimi, the former director of the Iraqi National Intelligence Service who became prime minister in May 2020, will be attaining a more concrete timeline for the withdrawal of US “combat” troops, a category that the Biden administration has yet to define.

The US in April tentatively agreed to the withdrawal, which is part of Baghdad’s careful balancing of competing Iranian and US influence in the country.

“What the prime minister needs to go back with to lower the political heat in his country is a deadline for this withdrawal of combat troops,” Douglas Ollivant, the former National Security Council director for Iraq under the administrations of George W Bush and Barack Obama, told Al Jazeera.

A reduced role for the US military has been an increasing demand among Iran-aligned Shia factions in the Iraqi parliament and from influential Iran-aligned armed groups that partially make up the Popular Mobilisation Forces (PMF) – an array of groups that fall under the auspices of the Iraqi government but operate separately from the country’s armed forces.

The sentiment has been fuelled by the 2018 US withdrawal from the Iran nuclear deal and the January 2020 Trump administration-directed drone assassinations of Iranian General Qassem Soleimani and Iraqi armed group commander Abu Mahdi al-Muhandis on Iraqi soil.

On Sunday, al-Kadhimi told the Associated Press “there is no need for any foreign combat forces on Iraqi soil.”

“What we want from the US presence in Iraq is to support our forces in training and developing their efficiency and capabilities, and in security cooperation,” he added.

The Biden administration, meanwhile, has not publicly detailed how it defines combat troops in Iraq and what the shift in policy would mean in practical terms. There are currently about 2,500 US troops in Iraq, already predominantly serving in training, advisory and support roles. The Pentagon has repeatedly maintained that US troops are in the country temporarily at the invitation of Iraq.

Still, Monday’s meeting offers an opportunity for Washington to provide further clarity on what it sees as its future role with Iraq and to hand at least a symbolic victory to al-Kadhimi, Ollivant said.

Such a win, he said, could help to assure more stable Iraqi federal elections scheduled for October while “satisfying the factions inside Iraq so that the rockets and armed drones stop falling on various US facilities”.

Meanwhile, neither Washington nor Baghdad have seriously pursued a complete US troop withdrawal in the short term, striking a stark contrast with Afghanistan, from which all US troops are set to leave by the end of August, and underscoring the continued threat from ISIL, which remains able to strike Iraq’s capital and traverse the country’s rugged northern regions.

In statements following a meeting in Washington on Friday, US Secretary of State Antony Blinken and his Iraqi counterpart Fuad Hussein both stressed their commitments to continuing to work together against ISIL while Blinken noted that “the partnership between the United States and Iraq is much broader and deeper than even the common fight against ISIS.”

However, that partnership remains largely uneven. Iraq relies more on the US presence in the country than Washington needs Baghdad as part of its wider strategy in the region, said Massaab al-Aloosy, a Middle East analyst at the Qatar-based Doha Institute of Graduate Studies.

“Iraq has several problems,” al-Aloosy told Al Jazeera. “There are the obvious ones – the Popular Mobilisation Forces and the terrorist groups – but there are other ones as well, a bad economy, water issues.

“You have all of these structural problems that Iraq needs other countries’ help to solve,” he said.

On Friday, Iraqi Foreign Minister Hussein ticked off a laundry list of areas of possible US-Iraqi cooperation spanning trade, clean energy, healthcare, and the coronavirus pandemic. Blinken, in turn, announced an additional $155m in humanitarian aid to Iraq, bringing the 2021 fiscal year total to more than $200m, and the total since 2014 to $3bn.

US ‘doesn’t need much’

Al-Kadhimi also has much to gain by staying in good standing with the US as he seeks to position himself as the “middleman” in the region, al-Aloosy said, a process that has involved strengthening ties with Saudi Arabia, Jordan and Egypt, while, as former director of intelligence, keeping good relations with “Iran’s different apparatuses that are functioning in Iraq”.

At the same time, while several high-ranking Biden administration officials “feel warmly” towards Iraq, “the US doesn’t need much from the Iraqis, except these missiles to stop falling,” said Ollivant, who is also a senior fellow at the Pennsylvania-based Foreign Policy Research Institute.

The attacks have proved a domestic headache for the Biden administration, even as Iraqis have borne the brunt of the casualties.

Within Biden’s own Democratic Party, some legislators have warned that US retaliatory strikes risk escalating into full-fledged conflict, particularly if a member of the US military is killed. They have sought to reign in the White House’s ability to act in the country without Congressional approval.

Several Republicans, meanwhile, have accused the Biden administration of being too soft with their response.

While Biden may seek further efforts from Baghdad to reign in the violence during Monday’s meeting, US officials are also aware of just how little power the prime minister has in that arena.

“I believe this government really wants to address the PMF issue and integrate them and have them answer more to the Iraqi government. However, that’s very difficult to impossible for any government,” al-Aloosy said. “I don’t think Biden can expect that.” 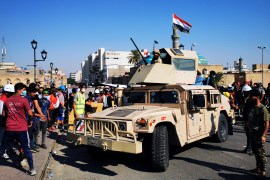 Iraqi PM al-Kadhimi: Iraq does not need US combat troops

With the threat of ISIL resurgence ever-present in Iraq, al-Kadhimi stressed Baghdad was not seeking a full withdrawal. 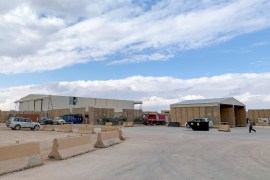 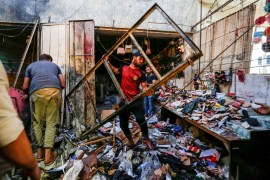 It is the third time this year that a bombing hits a market in the densely populated Sadr City in Baghdad.