The parliament approved 15 ministers out of a prospective 22-seat cabinet in a vote of confidence. Five candidates were rejected while voting on two ministers was postponed, leaving seven ministries still empty, including the key oil and foreign affairs positions.

This led to President Barham Salih appointing al-Kadhimi as prime minister-designate last month as the third candidate to form a cabinet, amidst a backdrop of anti-government protests.

The protests began in October 2019 after thousands of Iraqis took to the streets and called for the overhaul of what they said was the country’s political and corrupt ruling elite.

Heavy-handed responses by the government security forces, which killed hundreds of protesters, forced then Prime Minister Adel Abdul Mahdi to resign, although he remained in a caretaker role until Allawi was appointed in early February.

Before the voting session on the new cabinet on Wednesday, al-Kadhimi said his government would be a “solution-based, not a crisis government”. He promised early elections and rejected the use of Iraq as a battleground by other countries.

The prime minister also pledged to address the repercussions of the economic crisis by rationalising spending and negotiating to restore Iraq’s share of oil exports.

Born Mustafa Abdellatif Mshatat in 1967 in the capital Baghdad, he left Iraq in 1985 to Iran, before moving to Germany and the United Kingdom, which he later became a citizen of.

He holds a bachelor’s degree in law and is better known for his work as a journalist, where he chose the title of al-Kadhimi.

He was known to oppose the rule of the late Iraqi dictator Saddam Hussein.

After the United States invasion of Iraq in 2003, al-Kadhimi returned to Iraq and cofounded the Iraqi Media Network, running in parallel with his work as executive director of the Iraq Memory Foundation, an organisation founded for the purpose of documenting the crimes under Hussein’s Baath regime.

Al-Kadhimi also served as editor-in-chief of Iraq’s Newsweek magazine for three years from 2010. He is also an opinions writer as well as the editor of the Iraq section of the US-based Al-Monitor website.

In June 2016, al-Khadhimi took over the role of director of the Iraqi National Intelligence Service, in light of the intensification of the battles against the Islamic State of Iraq and the Levant (ISIL, also known as ISIS).

During his tenure, he forged links with dozens of countries and agencies operating within the US-led international coalition against ISIL.

During a rare visit to the Saudi capital, Riyadh, in 2017, accompanied by former Iraqi Prime Minister Haider al-Abadi, al-Kadhimi was seen in a long embrace with his friend Saudi Crown Prince Mohammed bin Salman (MBS).

Al-Kadhimi is widely viewed by associates and politicians as having a pragmatic mentality in addition to cultivating relations with all the main players across the Iraqi political spectrum: a good relationship with the US, and another that has recently reached out to the Iranians.

Last month, Kataeb Hezbollah, an armed group close to Iran and linked to the Popular Mobilization Units, issued a statement accusing al-Kadhimi of having blood on his hands for the deaths of its leader Abu Mahdi al-Muhandis and Iranian General Qassem Soleimani, and accused him of collaborating with the US.

However, with the oil price crash and the coronavirus pandemic, compromises were made between the Fatah bloc and al-Kadhimi who said he will uphold the muhasasa, or political apportionment system.

Introduced in Iraq after the 2003 US-led invasion in an attempt to provide proportional government representation among Iraq’s various ethno-sectarian groups, many Iraqis believe the system is deeply flawed and acts as a conduit for corruption and political patronage.

According to Iraqi political analyst Hisham al-Hashimi, al-Kadhimi faces no easy task in getting the country back on its feet again.

“I don’t doubt his ability on the technical issues such as forming equitable laws and a fair commission,” al-Hashimi told Al Jazeera.

“He will succeed in preparing for early elections, but the timing is not on his side due to the dire economic conditions and the spread of the coronavirus pandemic.” 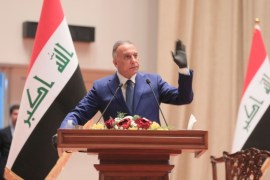 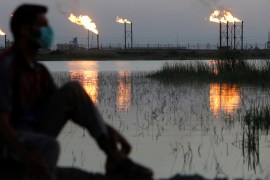 Iraq, oil and the future of its youth 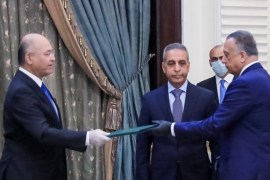 Could it be third time lucky in Iraq with new PM-designate?

Iraq’s intelligence chief Mustafa al-Kadhimi has been appointed to form a new cabinet but faces a number of obstacles.