The United States carried out another round of air raids against Iran-backed armed groups in Iraq and Syria, in response to drone attacks against US personnel and facilities in Iraq, with the militias threatening to retaliate.

In a statement on Sunday, the US military said it targeted operational and weapons storage facilities at two locations in Syria and one location in Iraq.

It did not say whether it believed anyone was killed or injured, but the Britain-based Syrian Observatory for Human Rights said at least five fighters were killed and several others wounded.

The attacks came at the direction of US President Joe Biden, the second time he has ordered retaliatory attacks against Iran-backed militia since taking office five months ago. Biden last ordered limited bombing against a target in Syria in February, that time in response to rocket attacks in Iraq.

“The United States took necessary, appropriate, and deliberate action designed to limit the risk of escalation – but also to send a clear and unambiguous deterrent message,” John Kirby, spokesman for the Pentagon, said in a statement.

Kirby said the targets were selected because “these facilities are utilized by Iran-backed militias that are engaged in unmanned aerial vehicle (UAV) attacks against US personnel and facilities in Iraq”.

The Kataib Hezbollah and Kataib Sayyid al-Shuhada military factions were among the “several Iran-backed militia groups” that had used the targeted facilities, Kirby added.

Two Iraqi militia officials told The Associated Press in Baghdad that four militiamen were killed in the air strikes near the border with Syria.

Armed groups aligned with Iran in a statement named four members of the Kataib Sayyid al-Shuhada faction they said were killed in the attack on the Syria-Iraq border. They vowed to retaliate.

Since the start of the year there have been more than 40 attacks against US interests in Iraq, where 2,500 American troops are deployed as part of an international coalition to fight the armed group ISIL (ISIS). 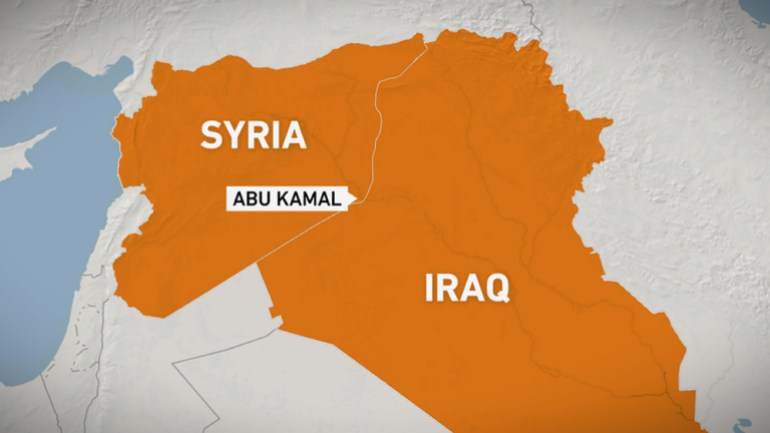 The US now has 2,500 troops in Iraq, deployed as part of an international coalition to fight what remains of the ISIL (ISIS) group.

There have been more than 40 attacks against US interests in Iraq since the start of the year. The vast majority have been bombs against logistics convoys, while 14 were rocket attacks.

Two US officials, speaking to the Reuters news agency on condition of anonymity, also said Iran-backed militias had carried out at least five drone attacks against facilities in Iraq used by US and coalition personnel since April.

One of the locations the US targeted on Sunday included a facility that was used to launch and recover the drones, a defence official said.

The US military used F-15 and F-16 jet fighters in the air raids and said the pilots returned safely.

The attacks came even as Biden’s administration is looking to potentially revive a 2015 nuclear deal with Iran, known as the JCPOA. Critics have said Iran cannot be trusted and have pointed to the drone attacks as further evidence that Iran and its proxies will never accept a US military presence in Iraq or Syria.

Biden and the White House declined to comment on the attacks on Sunday.

Lawrence Korb, a former US assistant secretary of defence, said the raids could “very definitely” be seen as Biden “serving notice” on Iran as negotiations continue to restart its nuclear deal with world powers.

“The first time he used military force was about a month after he was inaugurated,” Korb told Al Jazeera. “I think it was no accident that he did it then to send that signal to Iran. The fact that he’s doing it now while they are about to undergo the seventh round of the talks on the JCPOA is him saying: ‘Just because we are there, it doesn’t mean we are going to ignore it [other issues]’.”

Iraq’s government is struggling to deal with militias ideologically aligned with Iran, which are accused of rocket fire against US forces and of involvement in killing peaceful pro-democracy activists.

Earlier in June, Iraq released Iran-aligned militia commander Qasim Muslih, who was arrested in May on terrorism-related charges, after authorities found insufficient evidence against him.

Kirby said of Sunday’s air raids: “As a matter of international law, the United States acted pursuant to its right of self-defence. The strikes were both necessary to address the threat and appropriately limited in scope.”

House Speaker Nancy Pelosi said in a statement on Sunday the US air strikes “appear to be a targeted and proportional response to a serious and specific threat,” adding, “protecting the military heroes who defend our freedoms is a sacred priority”.