Moise was shot dead when assassins armed with assault rifles stormed his private residence in the hills above Port-au-Prince on July 7.

An investigation by Haitian and Colombian authorities, alongside Interpol, into Moise’s killing has revealed that Badio appeared to have given an order for the assassination three days before the attack, Vargas said in an audio message sent to news outlets by the police.

It was not immediately possible to reach Badio for comment. His whereabouts are unclear.

According to Vargas, the investigation found that Badio had ordered former Colombian soldiers Duberney Capador and German Rivera – who had initially been contracted to carry out security services – to kill Moise.

“Several days before, apparently three, Joseph Felix Badio, who was a former official of (Haiti’s) ministry of justice, who worked in the anti-corruption unit with the general intelligence service, told Capador and Rivera that they had to assassinate the president of Haiti,” Vargas said.

Vargas did not provide proof or give more details about where the information came from.

Capador was killed in a shoot-out with Haitian police hours after Moise was slain. Rivera remains detained in Haiti while police are still searching for Badio, who previously worked for Haiti’s Justice Ministry and then the government’s anti-corruption unit until he was fired in May.

More than 20 suspects accused of direct involvement in the slaying have been arrested, the majority of them former Colombian soldiers. At least three other suspects were killed, and police have said they are still looking for at least seven others.

Colombia’s government has said only a small group of Colombian soldiers knew the true nature of the operation and that the others were duped.

Also on Friday, Police Chief Leon Charles said 24 police officers were standing guard when the president’s house was attacked. He said they have been interrogated and that a fifth high-ranking police official has been placed in isolated detention with four others, although none have been named as suspects.

Interim Prime Minister Claude Joseph said the government will continue to bring those responsible to justice.

“We will continue to pose questions,” he said.

The plane tickets to Haiti for most of the former soldiers, at least, were purchased through a Florida-based company, Worldwide Capital Lending Group, Vargas said Friday.

Officials earlier said they had been bought by another Florida company, CTU Security, which allegedly recruited the men.

Worldwide issued a statement Thursday saying it helped provide a loan to CTU, but said it was meant to help finance infrastructure projects sought by Christian Emmanuel Sanon, a Haitian physician and pastor who has been arrested in the plot.

“At no time during any meeting or conversation with Dr Sanon or with any of his representatives was there any mention, discussion or suggestion of an assassination plot against President Moise or the intention to use force to bring about a change of leadership in Haiti,” the company said.

Meanwhile, former President Jean-Bertrand Aristide returned to Haiti on Friday after nearly a month in Cuba, thrilling hundreds of supporters who gathered at the airport.

Aristide, a charismatic yet divisive figure in Haiti was receiving unspecified medical treatment in Cuba.

Aristide’s return adds a potentially volatile element to an already tense situation in the country that is facing a power vacuum. Aristide has long been one of Haiti’s most polarising politicians and is still popular with many.

He was elected president in 1990, forced out in a military coup a year later and restored to power by the US military in 1994 to serve out the remainder of his term. As a champion of the poor and advocate of leftist “liberation theology”, he was deeply hated by members of the elite. 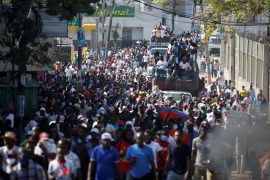 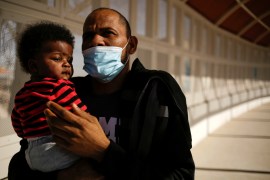 Calls grow to stop US deportations to Haiti amid political crisis 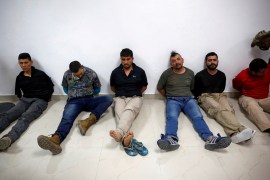 Some accused in Haitian assassination had US military training

The Pentagon said some former Colombian soldiers accused in the Haitian president’s murder were trained by the US.