Clashes between Yemeni government forces and Houthi rebels have intensified in the strategic province of Marib, with military sources saying a senior loyalist commander was among dozens of fighters killed.

Earlier this month, the Iran-backed Houthis resumed a push to capture Marib city, which lies close to some of Yemen’s richest oil fields in the north of the country.

Hundreds of fighters from both sides have been killed in fighting since Friday, according to government sources. The Houthis do not usually release casualty tolls.

“Twenty-two members of the government forces and more than 28 rebels have died in the last 24 hours in the fighting,” including special forces commander in Marib, General Abdel Ghani Shaalan, a military source told AFP news agency.

“Fighting continues unabated on all fronts in Marib province” – the government’s last bastion in the north of the country – the source said, adding that neither side had advanced on the ground. 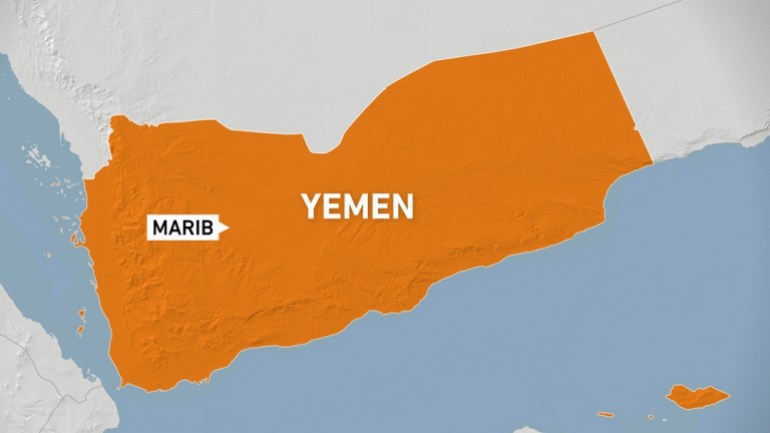 Nabeel Khoury, a former US diplomat in Yemen, said it is a “very critical battle”.

“It looks like both sides would like to be in a stronger bargaining position in anticipated peace talks,” Khoury told Al Jazeera.

“The problem of course is that these short-term gains … could actually derail the new peace process launched by the new US administration.”

The Saudi-led coalition backing the internationally recognised government launched more than 12 air raids in support of government forces, according to the Houthi-run Al Masirah TV channel.

More than 60 fighters were killed in fighting in Marib on Friday, the bloodiest day since the start of the offensive on February 8.

The government meanwhile accused the Houthis of firing 10 ballistic missiles on Friday night on Marib city, the official Saba news agency reported, with no reports of casualties.

The Houthis did not confirm the claim, but they have carried out cross-border attacks on Saudi Arabia with drones and missiles in the past.

Yemen’s grinding conflict has killed tens of thousands and displaced millions, according to international organisations, sparking what the United Nations calls the world’s worst humanitarian crisis.

The conflict began in 2014, after Houthi rebels seized the capital Sanaa, forcing the government to move its base to the southern port of Aden.

The Houthis now control most of the country’s north and the government has been struggling to defend Marib province.

Nasr Al-Deen Amer, secretary of the Houthi ministry of information, told Al Jazeera that the battle for Marib is one of the “hottest war fronts since the beginning of the aggression on Yemen”.

The UN last week warned of a potential humanitarian disaster if the fight for Marib continues.

The province is home to some two million internally displaced people, many of whom live with little to no resources. The UN estimates that 400,000 children under the age of five are severely malnourished.

Until early last year, life in Marib was relatively peaceful, despite war raging elsewhere in the Arabian Peninsula country.

With its proximity to the Saudi border, the province was largely untouched by the first years of conflict and even flourished, as those who sought sanctuary there opened businesses and restaurants.

The UN now says the fighting has put “millions of civilians at risk”.

The surge in violence this month comes after Washington decided to remove the Houthis from its list of “terrorist” groups to ensure aid is unimpeded and to pave the way to restarting peace talks.

Observers say the Houthis want to capture Marib as leverage before entering any negotiations.

US envoy Tim Lenderking travelled to the region last week on a tour of Gulf countries as he seeks ways to end Yemen’s brutal war.

The US Department of State did not specify his exact stops, saying only that he would “focus on the United States’ dual-track approach to end the conflict in Yemen: a lasting political solution and humanitarian relief for the Yemeni people”.