Prominent members of Pakistani Prime Minister Imran Khan’s government, donors to his party and family members of the country’s powerful military generals have moved millions of dollars of wealth through offshore companies, a new investigation by the International Consortium of Investigative Journalists (ICIJ) alleges.

Khan, who rose to power in 2018 on the back of promises to arrest Pakistan’s “corrupt” political elites, was not personally named in the newly leaked documents, dubbed the Pandora Papers, which were released late on Sunday.

The ICIJ’s investigation is based on more than 11.9 million confidential files leaked from 14 offshore financial services firms.

Ownership of offshore holding companies is not illegal in most countries, and does not indicate wrongdoing, but the instrument is frequently used to avoid tax liability or to maintain secrecy around large financial transactions.

Khan on Sunday said his government would “investigate all our citizens mentioned in the Pandora Papers [and] if any wrongdoing is established we will take appropriate action”.

The revelations about the large financial transactions of former members of Pakistan’s military offer a rare glimpse into the wealth of those belonging to an institution that has ruled the country for almost half of its 74-year history.

The military is also “the largest conglomerate of business entities in Pakistan, besides being the country’s biggest urban real estate developer and manager, with wide-ranging involvement in the construction of public projects”, according to a 2021 United Nations report.

The ICIJ leak named five former high-ranking military officers, including a former air force chief and two lieutenant-generals in the army, as being linked to large offshore investments in property and commercial enterprises. 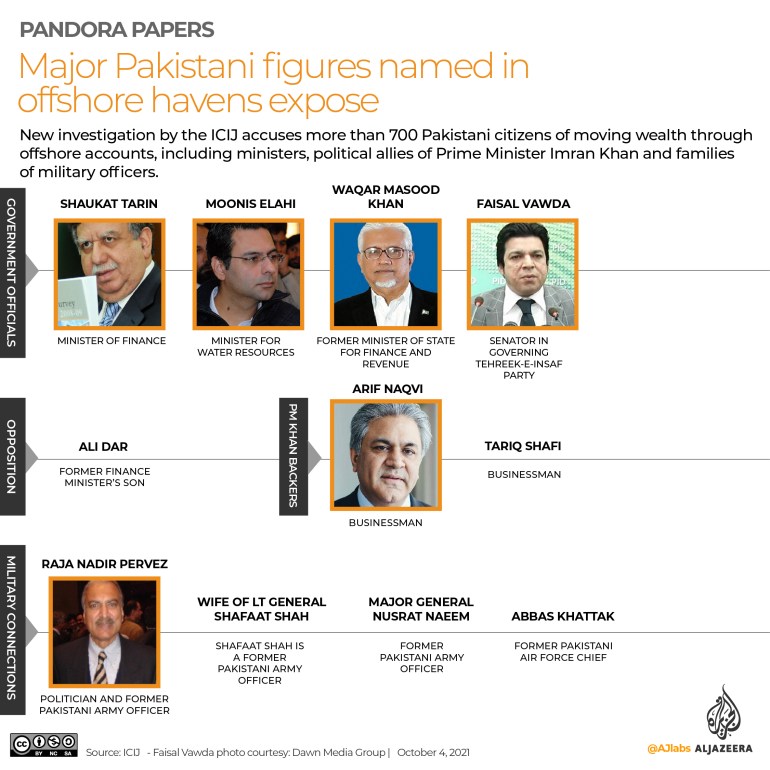 Ministers in the crosshairs

Finance Minister Tarin has denied any wrongdoing in his being named as the director and beneficial owner of Triperna Inc, a holding company established in the Seychelles in 2014, saying that the company was to be used for an investment transaction into a bank that he owned which did not take place.

“No account was opened, no transactions were made,” he told Pakistani television channel Geo News on Sunday night, following the revelations.

“Before it could happen there was a bomb blast in Karachi, and Tariq bin Laden [the potential investor, a Saudi national] became disinterested in our bank.”

Tarin said the company never held any assets and was closed soon thereafter.

The case of Moonis Elahi, Pakistan’s current water resources minister, appears to be more complicated, with the ICIJ investigation alleging Elahi sought to invest $5.6m from an alleged loan scandal into a trust through international financial services provider Asiaciti Trust in January 2016.

Asiaciti Trust accepted Elahi as a client a month later, despite a risk assessment commissioned by the company identifying his involvement in “several corrupt land development projects” during his time as a provincial politician in Punjab, Pakistan’s most populous province.

Elahi’s father, Chaudhry Pervez Elahi, is one of the province’s highest profile politicians, and had previously served as chief minister of Punjab in the military government of General Pervez Musharraf.

The Elahis served as key allies of Musharraf throughout his tenure, until he resigned in 2008, and were frequently accused of involvement in multimillion-dollar corruption.

The $5.6m transaction proposed by Elahi to Asiaciti Trust was allegedly made from proceeds from Bank of Punjab loans, ICIJ says.

Asiaciti Trust proposed Elahi invest the money in a vehicle that would own two properties in the United Kingdom, and also identified the Pakistan-based RYK sugar mill as a potential investment.

Ultimately, however, Elahi backed out of the deal when Asiaciti Trust said they would have to inform Pakistan’s tax authority, the Federal Board of Revenue, about the transaction, records show.

In 2017, public records show Elahi’s wife used a UK shell company to transfer a London apartment, valued at $8.2m, to a woman named Mahrukh Jahangir for no monetary exchange. A woman with the same name as Jahangir appears on public documents as a 9.4 percent shareholder in RYK Mills, ICIJ reported.

Elahi denies any wrongdoing, and a spokesperson for the minister, whose Pakistan Muslim League-Q is a PTI coalition partner, blamed the allegations on “political victimisation”.

Elahi and Tarin were not the only high-ranking members of PM Khan’s PTI party to be named in the Pandora Papers.

Others whose holdings have been exposed include the son of the prime minister’s former finance and revenue adviser Waqar Masood Khan, the brother of Industries Minister Khusro Bakhtyar, and former water resources minister, Faisal Vawda.

Omer Bakhtyar, the minister’s brother, was shown to have transferred a $1m apartment in the Chelsea area of London to his mother through an offshore company in 2018, the same year Khan’s PTI swept to power.

Naqvi, a major donor to Khan’s 2013 election campaign, transferred ownership of three luxury apartments, a country estate and a suburban London property in the UK, to an offshore trust operated by Deutsche Bank in 2017, the files show.

Naqvi has subsequently been charged by US prosecutors with more than $400m in fraud, and is facing extradition to that country while resident in the UK.

Shafi, another large PTI donor, was shown to hold $215m through offshore companies, according to the Pandora Papers.

The Pandora Papers also offer a rare glimpse into the wealth held by former members of the country’s powerful military, which has used the alleged corruption of civilian political leaders to justify seizing power three times in the country’s history.

The Pandora Papers show that in 2007, the wife of Lieutenant-General Shafaat Ullah Khan, a prominent general and key ally of then-President General Musharraf, acquired a $1.2m apartment through an offshore transaction.

Shah denied any wrongdoing in responses to the ICIJ.

Major-General Nusrat Naeem, a former director-general of counterintelligence at Pakistan’s Inter-Services Intelligence (ISI), owned a company in the British Virgin Islands that was registered in 2009, shortly after he retired.

Naeem was later accused of $1.7m in fraud related to the purchase of a steel mill. The case was dropped and he denies any wrongdoing.

Raja Nadir Pervez, a retired army lieutenant-colonel and former government minister, is shown to have owned a British Virgin Islands-registered company that has been related to major transactions “in machinery and related businesses to India, Thailand, Russia and China”, the ICIJ says.

“Records show that in 2003, Pervez transferred his shares in the company to a trust that controls several offshore companies,” the ICIJ reported. “One of the trust’s beneficiaries is a British arms dealer.”

Following his retirement, Pervez transitioned to politics, first being elected to parliament in 1985. In 2013, Pervez joined Imran Khan’s PTI party.

Other military-linked Pakistanis to be named in the Pandora Papers include two sons of former Pakistani Air Force chief Abbas Khattak, who in 2010 registered a British Virgin Islands company; and the daughter of a retired lieutenant-general who owns two apartments in one of London’s most expensive neighbourhoods through an offshore trust.