By Kareem Chehayeb
Correction3 Nov 2021
Al Jazeera originally reported that Pandora Papers revealed that former Central Bank Deputy Governor Mohammad Baasiri co-owned an offshore company. According to ICIJ's Lebanon media partner Daraj, the papers revealed that he had applied to establish a company in the British Virgin Islands in 2016. However, Baasiri told ICIJ following the leaks that he did not own an offshore entity.

Beirut, Lebanon – Prime Minister Najib Mikati and Central Bank Governor Riad Salameh are among several Lebanese political and financial officials named in the Pandora Papers with wealth hidden in offshore tax havens, at a time when millions of Lebanese people cannot access their savings in the banks.

The Pandora Papers, published on Sunday, are based on 11.9 million confidential files leaked to the International Consortium of Investigative Journalism (ICIJ), which found links to more than 330 politicians and public officials, including 35 current and former national leaders, in 91 countries and territories.

The Papers show that Mikati, the recently reappointed billionaire prime minister of Lebanon, owns a Panama-based offshore company he used to buy property in Monaco worth $10m.

His son Maher owns at least two companies in the British Virgin Islands, which he used to buy an office in central London for the Mikati family’s international investment company, the M1 Group, the investigation revealed.

Maher told Al Jazeera that “using offshore entities could be considered as forms of tax evasion for US and EU nationals but this is not the case for Lebanese nationals”.

He told the ICIJ that owning real estate through offshore entities offers more “flexibility” when it comes to renting, inheritance planning, and “potential tax advantages”.

Prime Minister Mikati issued a statement in response to the leaks, saying: “Since its inception, M1 Group (the Mikati family business) – and all its subsidiaries around the world – have upheld a separation between public and private.”

The statement added that the family business was “compliant with global standards” and consulted auditors regularly. It also said the Mikati family fortune had been amassed prior to Mikati’s involvement in Lebanese politics, and that his assets had been disclosed to the Lebanese Constitutional Council.

“Regrettably, the underlying logic behind the ‘Papers’ drifted toward transforming most, if not all, of those mentioned into ‘suspicious’ individuals &/or companies, by the mere fact of being listed in there – a logic that goes against the free-market business practices and good governance, in liberal economies, principles that the Mikati family defends.”

Salameh, meanwhile, is the target of several investigations. In July, French prosecutors opened an investigation into money-laundering allegations against the longtime central bank chief who has often dismissed them as politically motivated campaigns.

Marwan Kheireddine, chairman of Al-Mawarid Bank and a former minister, was revealed to own two offshore companies in the British Virgin Islands. Meanwhile, former Central Bank Deputy Governor Mohammad Baasiri’s name appeared in the leaks to have requested to establish an offshore company there, as well. Baasiri told the ICIJ that he did not own any offshore companies.

One of Kheireddine’s two companies is co-owned with the brother-in-law of Iqbal Mirchi, who was wanted by Indian police less than a decade ago on drug trafficking charges.

Records show that Kheireddine, a prominent commercial banking figure in Lebanon, and his brother registered six companies in the United Kingdom, four of which were set up just months before Lebanon’s financial meltdown began in September 2019.

Kheireddine was also widely criticised in August 2020 for purchasing a $9.9m penthouse in New York from Oscar-winning actress Jennifer Lawrence.

Establishing offshore companies is not necessarily illegal, but is a common tool for tax evasion, money laundering, and other nefarious financial practices. 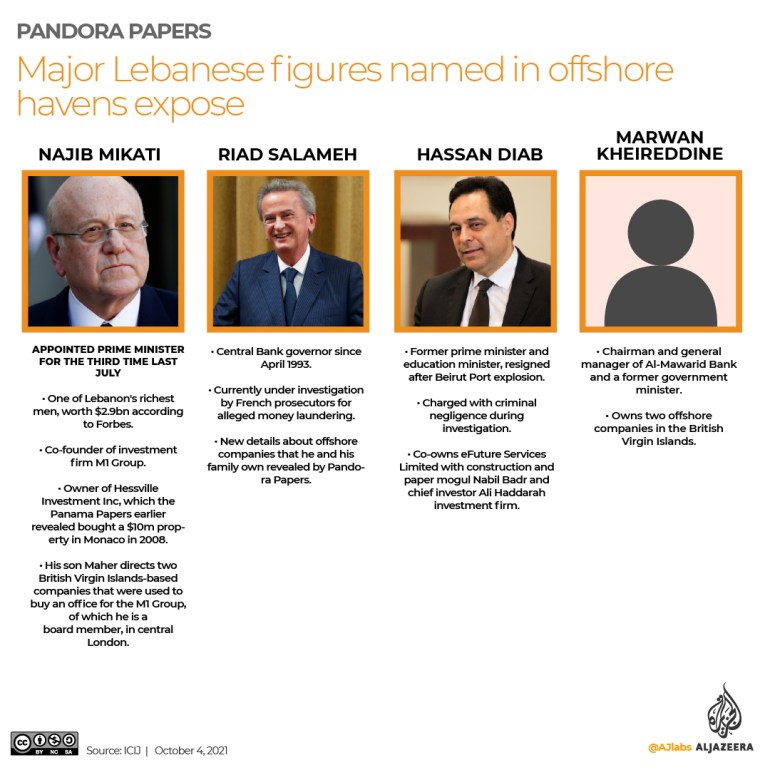 These findings come at a unique time for cash-strapped Lebanon, said Alia Ibrahim, from independent Lebanese media organisation Daraj, one of many local partners with the ICIJ.

“While the majority of Lebanese, already facing an economic crisis, have their deposits stuck in the banks, we have a political and financial establishment able to take their money to safe havens,” Ibrahim told Al Jazeera.

“This raises serious red flags. Now it’s now up to the judiciary to investigate.”

In September 2019, due to a shortage of foreign currency, commercial banks in Lebanon imposed limits on US dollar withdrawals, causing panic nationwide.

The Lebanese pound has lost about 90 percent of its value in less than two years. Banks intermittently closed their doors and eventually stopped all US dollar withdrawals and transfers.

In July 2020, former Finance Ministry Director-General Alain Bifani said Lebanon’s banks had “smuggled” up to $6bn out of the country between October 2019 and July 2020, evading financial controls put in place to avoid exactly that. Bifani had resigned his position in protest against the government’s handling of Lebanon’s financial meltdown two weeks prior to these statements.

Activist groups have demanded that Lebanon investigates these transfers.

The United Nations estimates that nearly three-quarters of the Lebanese population lives in poverty today, and a quarter of the population requires food assistance.

Ibrahim fears that, despite the findings of the Pandora Papers which could help in investigating decades of rampant corruption, the lack of a judiciary independent of political pressure could mean that the perpetrators of these crimes would not be held to account.

“We are a country that has lost everything,” she said. “Unless we have a culture of accountability, history is going to repeat itself.”