Donald Trump, the president of the United States, has urged Georgia’s top election official to recalculate the state’s presidential election results in his favour, while warning the official he was taking “a big risk” if he did not comply, according to the audio of an hour-long phone call obtained by The Washington Post.

During the call on Saturday, Trump continued his attempts to overturn the election results in Georgia, where President-elect Joe Biden won by a margin of 11,779 votes.

Trump has refused to concede to Biden, despite a resounding loss in the November 3 election, and the failure to overturn the results in several states.

Georgia had already conducted several audits and recounts of the result, which affirmed Biden’s victory, and officially certified those results, which will be approved by Congress on January 6.

Still, Trump told Republican Secretary of State Brad Raffensperger in the call: “So look. All I want to do is this. I just want to find 11,780 votes, which is one more than we have. Because we won the state.”

At another point in the phone call, Trump told Raffensperger: “The people of Georgia are angry, the people in the country are angry … And there’s nothing wrong with saying, you know, that you’ve recalculated.”

Raffensperger responded: “Well, Mr President, the challenge that you have is, the data you have is wrong.”

Since the November 3 election, Trump has repeatedly attacked how Raffensperger ran Georgia’s elections, claiming without evidence that the state’s 16 electoral votes were wrongly given to Biden.

On Saturday’s call, he called the official a “child” and “either dishonest or incompetent” while ticking off a laundry listed of debunked allegations.

Trump’s close allies were on the line during the call, including his Chief of Staff Mark Meadows and conservative lawyer Cleta Mitchell. Raffensperger’s general counsel Ryan Germany was also on the call, according to The Washington Post.

The Washington Post said the White House, the Trump campaign and Meadows did not immediately respond to a request for comment, and Raffensperger’s office declined to comment.

On Sunday before the Post released the recording, Trump tweeted about his call with Raffensperger, writing, “He was unwilling, or unable, to answer questions such as the ‘ballots under table’ scam, ballot destruction, out of state ‘voters’, dead voters, and more. He has no clue!”

Raffensperger tweeted a response saying, “Respectfully, President Trump: What you’re saying is not true. The truth will come out”.

Respectfully, President Trump: What you're saying is not true. The truth will come out https://t.co/ViYjTSeRcC

At another point in the call, Trump suggested that if Raffensperger and Germany do not find thousands of ballots illegally destroyed in Fulton County – of which there is no evidence of occurring – it was a “criminal offence”.

“And you can’t let that happen. That’s a big risk to you and to Ryan, your lawyer,” Trump said.

The release of the audio tape sent shockwaves across Washington.

Al Jazeera’s Alan Fisher, reporting from Atlanta, Georgia, called the recording “perhaps the most remarkable piece of audio that has come out of the Oval Office of the White House since the Nixon tapes in the 1970s”.

The call came weeks after the Electoral College voted on December 14, officially giving Biden 306 electoral votes – well above the threshold of 270 needed to win – based on his electoral victories in individual states.

Trump has since supported a bid by some Republican legislators to object to the results when Congress meets to certify the results on January 6 – the final step in formalising Biden’s win. That ploy is all but assured to fail as both chambers would need to vote to oppose the results. Democrats currently have a majority in the House.

“It is quite frankly jaw-dropping that the president this late on would be making those claims,” Fisher said. “But the reality is that the claims he’s making here in Georgia simply have no basis in fact and that has been proven again and again and again.”

Democrats reacted furiously to the release of the tape.

Vice President-elect Kamala Harris slammed it as “the voice of desperation” and a “bald-faced, bold abuse of power by the president of the United States” during a rally in Savannah, Georgia.

Senator Dick Durbin of Illinois, the No 2 Democrat in that chamber, said Trump’s conduct “merits nothing less than a criminal investigation”.

“Trump’s contempt for democracy is laid bare. Once again. On tape,” Schiff wrote on Twitter. “Pressuring an election official to ‘find’ the votes so he can win is potentially criminal. And another flagrant abuse of power by a corrupt man who would be a despot, if we allowed him. We will not.”

One moderate Republican, Congressman Adam Kinzinger, tweeted: “This is absolutely appalling. To every member of Congress considering objecting to the election results, you cannot – in light of this – do so with a clean conscience.”

Al Jazeera’s Shihab Rattansi, reporting from Washington, DC, said the debate about Trump’s statements – and whether they could land him in legal trouble – will come down to whether his words amounted to direct orders to commit election fraud.

“I think morally, you could see it as some sort of attempt to put the pressure on, but when it comes to the law, and what exactly is allowed rhetorically or actually as a direct order, these can be grey areas,” he said.

Georgia is set to hold two runoff Senate elections on Tuesday, a vote that will decide which party controls the chamber.

Trump, who will campaign in support of the Republican candidates in Georgia on Monday, said during the call that he will continue to highlight the fraud allegations during the event.

Trump also told Raffensperger he had harmed Republicans’ chances of victory by failing to acquiesce to his demands.

Steve Clemons, editor at large at the Hill, told Al Jazeera the audio tape showed Trump was living in his own bubble in which he refuses to accept the election outcome.

“President Trump has used much of his phone time, his outreach time, the time at Mar-a- Lago on golf courses, with largely sycophantic people. People who feed him what he wants to hear and continue this fantasy that he can still legitimately win the election by overturning votes,” said Clemons.

“He’s really put himself into a buffered zone, and it can have dangerous repercussions.” 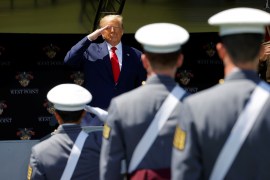 Ex-Pentagon chiefs warn against using US military in election row

In joint op-ed, all 10 living former secretaries of defence say involving US military in election disputes is dangerous. 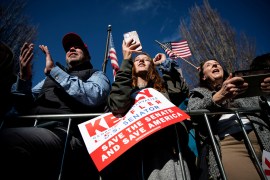 Biden, Trump to converge on Georgia before pivotal US Senate vote

The two races will determine which party controls the chamber and how difficult Biden’s first years in office could be. 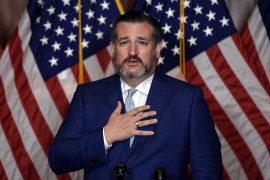 More Republicans say they will object to US election results

Eleven US senators including Ted Cruz say they will object to vote result certification unless a new audit is launched.