The United States Congress has voted to override President Donald Trump’s veto of a major defence bill, bringing to an end a tumultuous legislative session and a political showdown that pitted the US president against members of his own Republican Party.

In a rare New Year’s Day session, the Senate voted 81 to 13 to reach the two-thirds majority required to override Trump’s veto of the National Defense Authorization Act.

Democrats and Republicans joined together to support the $740bn defence bill, which sets the US’s military and strategic direction for the year ahead.

Friday’s vote was the first time US legislators overrode a Trump veto in the Republican leader’s presidency, after the Democrat-controlled US House of Representatives on December 28 also overwhelmingly voted in favour.

Trump, just weeks before he is set to leave the White House, had raised several points of opposition to the bill, saying it would restrict his ability to reduce the number of US troops in Afghanistan, South Korea and Germany.

Trump objected to language requiring the US military to rename bases named for Confederate figures in the US Civil War.

On Friday afternoon, Trump hit out at the Republican-controlled Senate for overriding his veto.

“Our Republican Senate just missed the opportunity to get rid of Section 230, which gives unlimited power to Big Tech companies. Pathetic!!!” he tweeted.

But in debate before the veto override, members of Congress – including senior Republicans – dismissed Trump’s objections to the bill as misguided.

“The reasons the president has given, I don’t think are frivolous at all – but they just shouldn’t be tagged to this particular piece of legislation,” Republican Senator John Cornyn said.

Trump has been increasingly at odds with Republican leaders since Senate Republican Majority Leader Mitch McConnell acknowledged Joe Biden as the winner of the US presidential elections.

McConnell had promised to pass the defence bill into law “one way or another” before Congress concluded on Sunday.

Trump also criticised the Senate on Friday for blocking his push to increase COVID-19 relief payments to Americans. “Now they want to give people ravaged by the China Virus $600, rather than the $2000 which they so desperately need. Not fair, or smart!” he tweeted.

Our Republican Senate just missed the opportunity to get rid of Section 230, which gives unlimited power to Big Tech companies. Pathetic!!! Now they want to give people ravaged by the China Virus $600, rather than the $2000 which they so desperately need. Not fair, or smart!

Meanwhile, Democratic Congresswoman Nancy Pelosi said in a statement Friday that the bipartisan votes in the Senate and House “delivered a resounding rebuke to President Trump’s reckless assault on America’s military and national security”.

Pelosi, the Democratic House Majority Leader, said US lawmakers are urging “Trump to end his desperate and dangerous sabotage” before Biden’s inauguration later this month.

The 4,500-page defence legislation marked a continuing and gradual shift in US military priorities, as it identified China as the country’s top strategic threat.

Among numerous provisions, the legislation includes a new “Pacific Deterrence Initiative” designed to refocus the Pentagon on key gaps in US military capabilities in the Pacific. The Pentagon plans to invest more than $18.5bn during the next five years under the new initiative.

“We are in the most dangerous situation that we’ve been in before,” said Senator James Inhofe, Republican chairman of the Senate Armed Services Committee, which wrote the bill.

“This is the first time we have really stepped back and said, ‘We have a new threat rising in the Pacific. We have to take a holistic view’,” said Senator Jack Reed, the top Democrat on the Senate Armed Services Committee.

US-China relations have deteriorated during the past year.

Earlier this week, China’s defence ministry accused the US of a “provocation” and “a show of force” after two American warships sailed through the sensitive Taiwan Strait – the second such mission in December.

The defence legislation also directs the US military to accelerate development and testing of hypersonic missiles, a new kind of weapons system technology that China and Russia have deployed but the US has not.

Additionally, it includes a number of provisions to strengthen the US government’s cybersecurity capabilities – an issue that has come to the fore after several government agencies were hacked in a wide-reaching cyberattack that senior US officials blamed on Russia.

Under the legislation, a new National Cyber Director position will be created at the White House, which incoming President-elect Joe Biden has said he will fill. 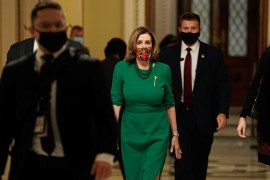 US House votes to override Trump veto of defence bill

Republican legislators join Democrats to override a Trump veto in a rare bipartisan rebuke of the president. 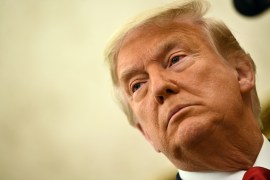 In series of Saturday morning tweets, US president repeats claim $740bn legislation is a ‘gift to Russia and China’. 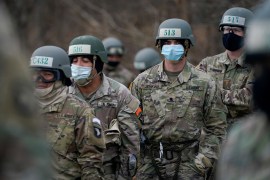 Despite Trump’s objections, the US Congress is set to override a Trump veto for first time in his presidency.