Dozens of civil society and faith-based groups in the United States are urging President-elect Joe Biden to overturn the Trump administration’s decision to label Yemen’s Houthis a “terrorist” organisation.

In a letter (PDF) to Biden on Friday, 50 organisations including the National Council of Churches and Health Alliance International said “rather than being a catalyst for peace, these designations are a recipe for more conflict and famine”.

They will “prevent the delivery of critical humanitarian assistance to millions of innocent people, greatly hurt the prospects for a negotiated settlement to the conflict, and further undermine U.S. national security interests in the region”, the letter reads.

Outgoing President Donald Trump’s administration said on Monday it was designating the Houthis a “Foreign Terrorist Organization” and a “Specially Designated Global Terrorist”.

The foreign policy move – part of Trump’s “maximum pressure” campaign against Iran and its allies, such as the Houthis – is expected to come into effect on January 19, the day before Biden takes office.

“The designations are intended to hold Ansar Allah accountable for its terrorist acts, including cross-border attacks threatening civilian populations, infrastructure and commercial shipping,” Pompeo said in a statement, using the official name for the Houthi movement.

However, the United Nations, humanitarian aid organisations working in Yemen and US legislators have condemned the decision as a threat to the lives of millions of Yemenis already hard-hit by a devastating war.

The war in Yemen began in 2014 after the Houthis seized much of the country and overran the capital, Sanaa.

The conflict worsened in March 2015 when Saudi Arabia and the United Arab Emirates, with US backing, assembled a military coalition to try to restore President Abd-Rabbu Mansour Hadi’s government.

Tens of thousands have been killed and the UN has said the conflict caused the world’s worst humanitarian crisis.

Hassan El-Tayyab, lead Middle East policy lobbyist at Friends Committee on National Legislation, one of the letter’s signatories, said the Houthi designation would block aid delivery and hurt the prospect of talks to end the conflict.

“For the sake of millions of Yemenis facing starvation, the Biden administration must reverse this disastrous designation and end US military support for the Saudi-UAE led coalition’s war on day one, because Yemen can’t wait,” El-Tayyab told Al Jazeera.

For his part, Biden has pledged to “end US support for Saudi Arabia’s war in Yemen” as president.

He faces pressure from within his own Democratic Party, members of which have tried unsuccessfully to end US support for Saudi-led forces in Yemen for years.

The International Crisis Group (ICG) said on Wednesday Biden’s senior advisers may believe a reversal is “too tricky politically, given that the Houthis are a violent armed group with a sectarian outlook that overthrew Yemen’s internationally-recognised government”.

But the ICG said Biden must lift both designations “preferably in its first days or week” in office.

“That said, lifting designations can take time, and in the interim, the Biden administration should be prepared to issue as expansive a licencing regime as possible and signal to the humanitarian aid community and others its intention to revoke the designations,” the group said.

“It is far better to prevent a full-blown famine driven by US actions now than to deal with the consequences only when they become so evident as to be uncontrollable.” 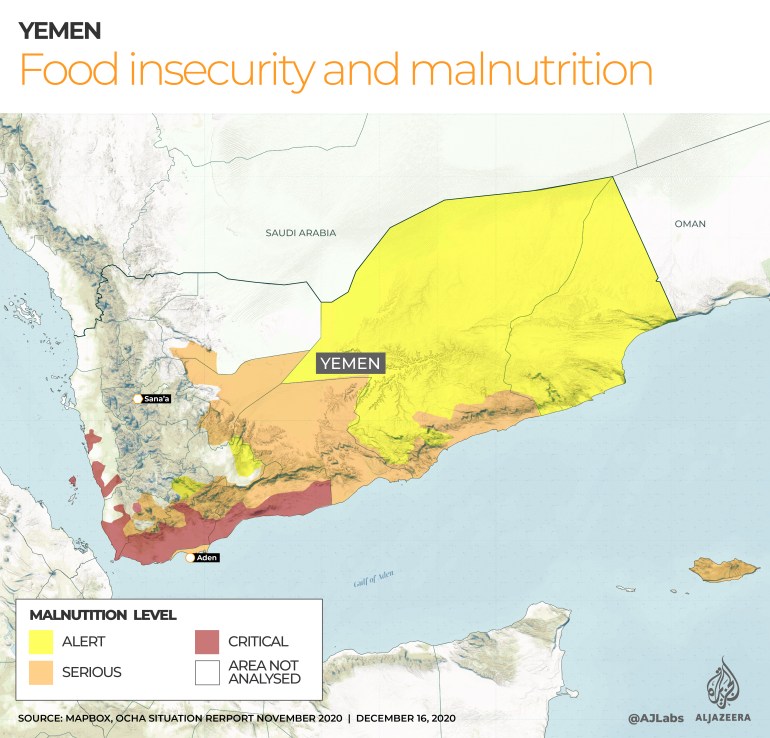