Mexican President Andres Manuel Lopez Obrador has denied that Mexico had agreed to capture a cartel leader for the United States in order to secure the return of ex-defence minister Salvador Cienfuegos from US custody.

News agency Reuters reported last week that Mexico agreed with US Attorney General William Barr to seek the arrest of a high-level Mexican drug cartel leader as part of a deal to get US drug trafficking charges against Cienfuegos dropped.

“There is no deal in the shadows,” Lopez Obrador said at his regular news conference on Monday, referring to media reports that Mexico had threatened to expel US Drug Enforcement Administration (DEA) agents over Cienfuegos’ arrest.

He said it was wrong to suggest that the US sent Cienfuegos back so that Mexico would send Washington a leader of organised crime.

Cienfuegos’s arrest in Los Angeles in October followed a multi-year investigation that used wiretaps to track a military figure, dubbed “El Padrino”, Spanish for “The Godfather”, by traffickers.

Cienfuegos, 72, was secretly indicted by a federal grand jury in New York in 2019. He was accused of conspiring with the H-2 cartel in Mexico to smuggle thousands of kilos of cocaine, heroin, methamphetamine and marijuana while he was defence secretary from 2012 to 2018.

Gladys McCormick, a history professor at Syracuse University and an expert on US-Mexico relations, said that although arresting Cienfuegos fed into the narrative that the Mexican government is corrupt, it ultimately did not advance US political interests.

“At the end of the day, arresting Cienfuegos jeopardised future collaboration between the two militaries because it meant that no one on the Mexican side was safe from possible prosecution, even after helping the Americans,” McCormick told Aljazeera.

Cienfuegos returned to Mexico after a federal judge dropped the charges against him at Barr’s request. Under the agreement, he will face an investigation in Mexico.

Mexico has hailed Cienfuegos’s return as a victory for the country’s sovereignty and its demand to be treated as an equal partner by the US.

“All in all, freeing Cienfuegos without any charges or penalties showcases that his arrest was a complete debacle for both the DEA and DOJ [Department of Justice],” McCormick said.

US prosecutors said intercepted messages showed that Cienfuegos accepted bribes in exchange for ensuring the military did not take action against the cartel and that operations were initiated against its rivals. He was also accused of introducing cartel leaders to other corrupt Mexican officials. 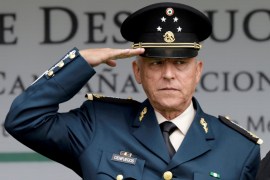 US to drop drug charges against Mexico’s former defence chief

Charges against Salvador Cienfuegos to be dropped so he can be investigated in Mexico, says US attorney general. 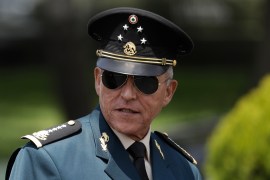 The case prompted the government to threaten a review of agreements allowing US agents to operate in Mexico.

Mexico says no more US trials for corrupt officials