Rescuers continue to dug through heavy blocks of concrete with their bare hands early on Saturday, in a desperate search for survivors from a powerful earthquake that levelled buildings across Greece and Turkey, killing at least 26 people.

Much of the damage in Turkey occurred in and around the Aegean resort city of Izmir, which has three million residents and is filled with high-rise apartment blocks. It was unclear how many people were trapped in the rubble.

The quake also caused a mini-tsunami on the Aegean island of Samos and a sea surge that turned streets into rushing rivers in one town on Turkey’s west coast.

Turkish officials confirmed 24 dead and nearly 800 injured after the quake hit the coastal province of Izmir.

In Greece, two teenagers – a boy and a girl – were killed on the island of Samos when a building collapsed on top of them.

“Words fail when children are lost. In these difficult hours, our thoughts turn to their families and Samos experiencing unbearable pain,” Prime Minister Kyriakos Mitsotakis said.

People flooded onto the streets in the Turkish city of Izmir after the magnitude 7.0 earthquake hit, witnesses said. The wreckage of multiple-story buildings in the city’s centre could be seen with people climbing out to escape. Smoke rose into the sky in several areas.

Images on social media showed water rushing through the streets of Izmir from an apparent sea surge.

Another tsunami footage from the earthquake in Izmir province of Turkey.

This one is really dangerous pic.twitter.com/62zfddWSi8

Izmir Governor Yavuz Selim Kosger said at least 70 people had been rescued from the wreckage. He said four buildings were destroyed and more than 10 collapsed, while others also were damaged.

Search-and-rescue efforts were continuing in at least 12 buildings.

Ilke Cide, a doctoral student who was in Izmir’s Guzelbahce region at the time of the earthquake, said he went inland after waters rose after the earthquake.

“I am very used to earthquakes … so I didn’t take it very seriously at first but this time it was really scary,” he said, adding the earthquake lasted for at least 25 seconds.

Footage on social media showed debris including refrigerators, chairs, and tables floating through streets on the deluge. TRT Haber showed cars being dragged by the water and piled on top of each other.

AFAD said it was a magnitude 6.6 earthquake, while the US Geological Survey said it was 7.0. It struck at about 11:50 GMT and was felt along Turkey’s Aegean coast and the northwestern Marmara region.

The US Geological Survey said the depth was 10 kilometres (six miles) and the epicentre was 33.5km (20.8 miles) off Turkey’s coast.

Ali Yerlikaya, governor of Istanbul where the earthquake was also felt, said there were no reports of damage there.

Crisscrossed by major fault lines, Turkey is among the most earthquake-prone countries in the world. More than 17,000 people were killed in August 1999 when a magnitude 7.6 earthquake struck Izmit, a city southeast of Istanbul. In 2011, an earthquake in the eastern city of Van killed more than 500.

The foreign ministers of Turkey and Greece pledged on Friday to help each other in rescue and recovery efforts. The two countries have been locked in a dispute over eastern Mediterranean energy rights.

“Greek Foreign Minister [Nikos] Dendias called our minister Mevlut Cavusoglu to wish him the best. Both ministers stressed they were ready to help each other in case of need,” the Turkish foreign ministry said.

Two teenage students were killed on the Greek island of Samos when the wall of a building collapsed. Media reports said the two victims, the first reported in Greece, were aged 15 and 17, and were walking home from school in the port of Vathy when it struck.

“Two unconscious youngsters were pulled from the rubble of a collapsed wall and taken to hospital for identification,” the fire service said.

The earthquake was felt across the eastern Greek islands and even in the capital, Athens.

“We have had many earthquakes in the past, however, I have never felt one that has lasted this long,”  Anna Makris, a school counselling coordinator in Athens, told Al Jazeera.

“There is a real sense of panic and now we are worried about aftershocks,” Makris added.

Greek media said residents of Samos and other islands fled their homes, while some rockfalls were reported.

Residents of Samos, an island with a population of about 45,000, were urged to stay away from coastal areas, Eftyhmios Lekkas, head of Greece’s organisation for anti-seismic planning, told Greece’s Skai TV.

“It was a very big earthquake, it’s difficult to have a bigger one,” said Lekkas.

Public television ERT reported the earthquake caused a mini-tsunami on Samos and a number of buildings were damaged.

A resident of the Greek island Ikaria, right next to Samos, told Al Jazeera she ran out of her house after “the earth started moving”.

“Some people screamed and started crying while others were trying to gather everyone to a safe location in fear that buildings would collapse,” she said, asking not to be named. “There are quite a  few damaged buildings and there were landslides on different parts of the island.”

Usaid Siddiqui contributed to this report 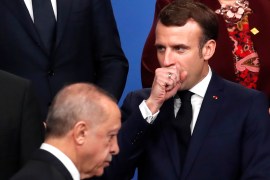 Leaders of Turkey and France engage in a war of words after Macron said Islam was a religion in crisis worldwide. 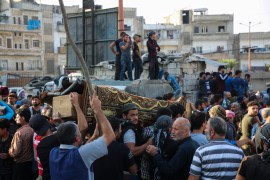 Latest uptick comes as Turkey’s involvement in the region stretches from Syria to the Caucasus and the Mediterranean. 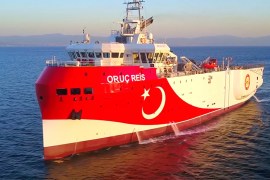 Turkish navy says Oruc Reis vessel, scheduled to end its work on Thursday, will now remain at sea until October 27.