Bahrain has hosted the so-called “Peace to Prosperity” workshop to discuss what the United States has described as the economic part of President Donald Trump’s “deal of the century”, his proposal for solving the Israeli-Palestinian conflict.

The Palestinian leadership is boycotting the meeting on June 25 and 26 in Manama, leading critics to question the credibility of the event.

According to the White House, the meeting “will facilitate discussions on an ambitious, achievable vision and framework for a prosperous future for the Palestinian people and the region”.

Christine Lagarde, the managing director of the International Monetary Fund, said generating economic growth in conflict-riven countries can be a struggle.

The Palestinians have great economic potential that can only be fulfilled with serious reform and protections for investors that must include serious anti-corruption efforts.

But those alone are not enough, Lagarde said, stressing that a “satisfactory peace” is imperative for prosperity. “It’s a matter of putting all the ingredients together,” she said.

“Improving economic conditions and attracting lasting investment to the region depends ultimately on being able to reach a peace agreement,” she said in a statement released later by the IMF.

“Peace, political stability and re-establishment of trust between all the parties involved are essential pre-requisites to the success of any economic plan for the region.”

Lagarde’s comments appeared at odds with the views expressed by Kushner when he opened the conference on Tuesday and said an economic plan “is a necessary precondition to resolving what has been a previously unsolvable political situation.”

White House adviser Jared Kushner said on Wednesday that the door remained open to the Palestinians to engage in a peace plan as he blamed the leadership of letting down its people.

“If they actually want to make their people’s lives better, we have now laid out a great framework in which they can engage and try to achieve it,” President Donald Trump’s son-in-law told reporters, as he closed a two-day economic workshop in Bahrain boycotted by the Palestinian leadership.

“We’re going to stay optimistic,” he said. “We have left the door open the whole time.”

“What the [Palestinian] leadership has done is that they’ve blamed Israel and everyone else for all the people’s problems, when in fact the common theme coming up is that this is all achievable if the government wants to make these reforms,” he added.

UAE says ‘give plan a chance’

Speaking at the conference on Wednesday, UAE Minister of State for Financial Affairs Obaid al-Tayer said: “We should give this initiative a chance.”

Saudi finance minister Mohammed al-Jadaan said Riyadh would support whatever economic plan that would bring prosperity to the Palestinians.

PLO reiterates rejection of US plan

The Palestinian Liberation Organization (PLO) has reiterated its rejection of the $50bn US economic plan for the Palestinians, saying the proposal’s lack of political vision guarantees its failure.

The PLO Executive Committee said in a statement that the Trump administration wants to sell a “mirage of economic prosperity” which will only perpetuate the Palestinians’ “captivity”.

It also accused the White House of using the workshop as cover for Israel’s efforts to achieve normal relations with Arab states and grow its settlements in the occupied West Bank, adding that peace could not be achieved without ending “Israeli occupation and economic domination”.

Oman has announced it will open an embassy in the West Bank city of Ramallah.

“A delegation from the Ministry of Foreign Affairs will travel to Ramallah to initiate the opening of the embassy,” the foreign ministry said, without providing further details.

Saudi Arabia’s minister of state has expressed support for Washington’s economic plan for the Palestinian territories, saying it could succeed since it includes the private sector and “there is hope of peace”.

Christine Lagarde, managing director of the International Monetary Fund (IMF), told the Bahrain conference that growth in the West Bank and Gaza had to be “job intensive”.

“One of the really good aspects of the plan … is that it identifies some of the sectors, some of the industrial and economic sectors, that will be conducive to jobs,” Lagarde said.

“It cannot be any kind of growth in the West Bank and Gaza, it needs to be job intensive,” she added, citing agriculture, tourism and construction as sectors that “will absorb a lot of labour”.

White House senior adviser Jared Kushner has opened the Bahrain workshop by saying that an agreement on an economic pathway forward was a “necessary precondition” for Israeli-Palestinian peace.

“My direct message to Palestinian people, despite what those who have failed you have told you, President Trump and this administration have not given up on you,” he said.

Among the attendees at the workshop are former UK Prime Minister Tony Blair and the IMF’s Christine Lagarde.

United Nations Secretary-General Antonio Guterres said on Tuesday it was important “to pursue peace efforts to realise the vision of two states, Israel and Palestine, living side by side in peace and security.”

Guterres was speaking at a pledging conference in New York for the UN agency that helps Palestinian refugees as President Donald Trump’s administration prepared to launch in Bahrain a $50bn economic formula for Israeli-Palestinian peace.

The Trump administration has consistently refused to commit to a two-state solution, keeping the political stage of its peace plan a secret.

“Iran has engaged over the past couple of months in a long series of unprovoked and unjustifiable attacks … threatening the conference in Bahrain is always a possibility,” Bolton said during a visit to Jerusalem. “It would be a big mistake for Iran to continue this kind of behaviour.”

He also said the Palestinian boycott of the conference was “a mistake”.

“The prospects for Palestinians, for Israelis, for everybody in the region, if we could find an acceptable agreement between Israel and the Palestinians is incredibly bright. And rather than re-litigate decades of disputes, think about the future and negotiate on that basis.

“I think we’re optimistic. I think the president’s optimistic and I hope the Palestinians are optimistic, too.”

Palestinians staged rallies across the West Bank in protest against the US-led conference in Bahrain and the participation of Arab delegations.

Demonstrators gathered in Hebron, Bethlehem, Jenin, Nablus, Tulkarm, Salfit, Qalqilia and Jericho, while a general strike was staged in the Gaza Strip.

“Any plan that includes the liquidation of the Palestinian cause … is rejected by the Palestinians and is not debatable or negotiable,” Saeb Erekat, secretary-general of the Palestine Liberation Organization’s (PLO) executive committee, said in a statement.

Under the Kushner plan, donor nations and investors would contribute about $50bn to the region with $28bn going to the Palestinian territories – the Israeli-occupied West Bank and the Gaza Strip – as well as $7.5bn to Jordan, $9bn to Egypt and $6bn to Lebanon.

Hamas official Mushir al-Masri said the Trump approach “seeks to turn our political cause into a humanitarian cause, and to merge the occupation into the region”.

US to unveil ‘economy first’ approach to peace plan

The first – economic – stage of President Donald Trump’s Middle East peace plan will be launched in Manama, Bahrain, at a conference the White House sees as a bid to drum up financial backing for its $50bn investment plan, which Palestinians deride as an “economy first” approach doomed to fail.

The two-day international meeting, led by Trump’s son-in-law Jared Kushner, has been billed as the first part of Washington’s long-delayed broader political blueprint to resolve the Israeli-Palestinian conflict.

Neither the Israeli nor Palestinian governments will attend the curtain-raising event in Manama.

Observers will be watching closely to see whether attendees, including Saudi Arabia and other wealthy Gulf Arab states, are interested in contributing to the plan, which has already elicited bitter criticism from Palestinians and others in the Arab world.

Morocco’s foreign ministry said a member of the ministry of economy and finance will represent the country at the two-day conference.

The foreign ministry did not offer further details on the identity of the finance ministry staff member but said the kingdom remains attached to the two-state solution.

On Sunday, thousands took to the streets of Rabat to express their opposition to the Middle East peace plan.

Kushner to Al Jazeera: Bahrain conference will be ‘a success’

Jared Kushner has told Al Jazeera he is confident the two-day workshop will be successful.

“I think it’s already been a success in the sense that we have every country coming from the region, we have many countries coming from throughout the world, despite people who tried to get them not to come, they’re all coming and that’s a very big first step,” he said in an exclusive interview.

“The second step is that we’ve been able to get some of the top investors and people from throughout the world to come, who are showing interest in helping the Palestinian people in the region,” he added.

Kushner also said it will not be possible to solve the decades-long Israeli-Palestinian conflict with a deal that adhered to the Arab Peace Initiative.

Hundreds of Palestinians in the occupied West Bank protested against the US’s Middle East peace plan.

In central Ramallah, demonstrators raised Palestinian flags and held signs condemning the US-led initiative and the Arab countries taking part in it.

“It is just simply a theoretical piece of work calling for $50bn,” Shtayyeh said, “We don’t know where this money is going to come from but we know that the economic problem in Palestine has to do with all the Israeli measures.

Analysts have criticised the economic part of the US’s peace plan for failing to address the main problem that has heavily curbed the Palestinian economy – the 52-year-old Israeli military occupation of the Palestinian territories.

The economic plan was released by the White House on Saturday and is set to be presented during the US-led workshop in Bahrain on June 25-26.

When the document was released, many noticed that the 40-page plan was void of any political context and of any mention of the words “occupation”, “freedom”, “equality” and “blockade”.

The US has revealed a proposal to create a $50bn global investment fund for the Palestinians and neighbouring Arab states, designed to be the economic engine of the long-awaited US Middle East peace plan.

Palestinian Authority President Mahmoud Abbas on Saturday rejected it and the US peace effort, which is led by President Donald Trump’s senior adviser Jared Kushner. 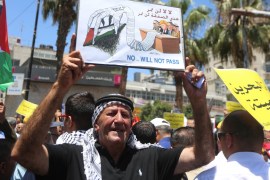 With no political deal, is Palestine economic peace just a dream? 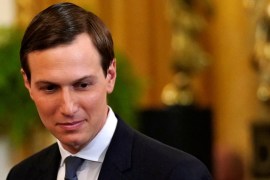 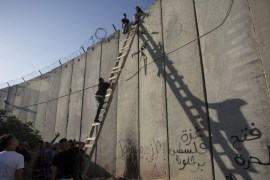 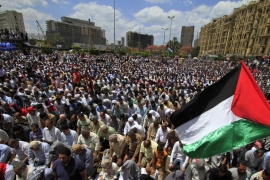