The United States is suspending its compliance with the Intermediate-Range Nuclear Forces (INF) Treaty with Russia on Saturday and will withdraw from the landmark 1987 arms control accord in six months if Moscow does not end its alleged violation of the pact, US Secretary of State Mike Pompeo said on Friday.

Pompeo said the administration will provide a formal notice to Russia that the US is withdrawing from the INF Treaty in six months and, if Moscow doesn’t come into compliance, it “will terminate”.

President Donald Trump said in a statement that “for too long” Russia has violated the treaty “with impunity, covertly developing and fielding a prohibited missile system that poses a direct threat to our allies and troops abroad”.

Foreign Ministry spokeswoman Maria Zakharova told Russian media the US exit is not a question of “Russian guilt”, but the “strategy of the United States is to get out of its international legal obligations in different areas”.

An American withdrawal from the pact has been expected for months and follows repeated accusations by Washington that Moscow is violating the treaty – a charge the Kremlin denies.

The treaty, signed in 1987 by then-President Ronald Reagan and Soviet leader Mikhail Gorbachev, banned an entire class of weapons: ground-launched cruise missiles with a range between 500km and 5,500km.

Such weapons were seen as particularly dangerous since they take only a few minutes to reach their targets, leaving little time for political leaders to ponder a response and raising the threat of a nuclear war in case of a false attack warning.

US officials have also expressed concerns that China, which is not a party to the treaty, is gaining a significant military advantage in Asia by deploying large numbers of missiles with ranges beyond the treaty’s limit.

NATO said that if Moscow failed to destroy all new missile systems that Washington insists violate the treaty, “Russia will bear sole responsibility for the end of the treaty”.

Trump said his administration “will move forward with developing our own military response options and will work with NATO and our other allies and partners to deny Russia any military advantage from its unlawful conduct”.

Kremlin spokesman Dmitry Peskov told reporters earlier on Friday that he was expecting to receive official notification in the coming days. He accused Washington of being “unwilling to hold any substantial talks” with Moscow to save the treaty.

Al Jazeera’s Rory Challands, reporting from Moscow, said one of the major problems with the US withdrawal is that there is no alternative in place.

“There have been various critics, across the spectrum, saying the INF Treaty was out of date because it was something the US and Soviet Union had agreed to, but countries such as China hadn’t. They were allowed to forge ahead with missile development as they wished,” he said.

“The problem is that right now, there is no replacement … and there doesn’t seem to be any work in progress to develop one.”

In a tweet on Thursday, the chief spokeswoman for NATO, Oana Lungescu, said there were no signs of getting a compliance deal with Russia.

“So we must prepare for a world without the Treaty,” she wrote.

Technically, a US withdrawal would take effect six months after this week’s notification, leaving a small window for saving the treaty. In talks this week in Beijing, the US and Russia reported no breakthrough in their dispute, leaving little reason to think either side would change its stance on whether a Russian cruise missile violates the pact.

Russian Deputy Foreign Minister Sergei Ryabkov was quoted by the state news agency Tass as saying after the Beijing talks on Thursday, “Unfortunately, there is no progress. The position of the American side is very tough and like an ultimatum.”

Ryabkov added that Moscow remains ready to “search for solutions” that could keep the treaty in force.

The US withdrawal raises the prospect of further deterioration in US-Russian relations, which are arguably at the lowest point in decades, and debate among the US allies in Europe over whether Russia’s alleged violations warrant a countermeasure such as the deployment of an equivalent American missile on the continent.

The US has no nuclear-capable missiles based in Europe; the last of that type and range were withdrawn in line with the INF Treaty.

The prospect of US withdrawal from the INF pact has stirred a global concern. Following the US announcement, German Foreign Minister Heiko Maas tweeted that Russia is not prepared to restore confidence in the INF Treaty.

“There will be less security without the treaty,” he said.

The French foreign ministry said in a statement that it regretted the US decision, but encouraged dialogue with Russia during the six-month period and consult NATO alliance partners.

“We don’t have to mirror what Russia does,” Stoltenberg said.

“But at the same time, we have to make sure that we maintain credible and effective deterrence,” he added, without giving specifics on what the different military option NATO is looking at could entail.

Nuclear weapons experts at the Carnegie Endowment for International Peace said in a statement this week that while Russia’s alleged violation of the INF Treaty was a serious problem, the US withdrawal under current circumstances would be counterproductive.

“Leaving the INF Treaty will unleash a new missile competition between the United States and Russia,” they said.

Laura Rockwood, executive director at the Vienna Center for Disarmament and Non-Proliferation, called the treaty “extraordinarily successful” and said it “needed saving”.

“It would be best to keep the INF in place,” she told Al Jazeera. “You don’t throw the baby out with the bathwater. It’s been an extraordinarily successful arms control treaty. There have been concerns over competition by China but perhaps the best way of addressing that is instead of scrapping the INF altogether, you try to engage China either on a trilateral basis or on a separate bilateral basis.”

Editor’s note: Russian news agency RIA previously reported that Moscow was ready for dialogue over the INF Treaty. This article has been updated to reflect that the news agency has withdrawn its previous reporting. 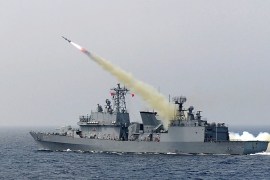 US leaving INF Treaty to get out of its obligations: Russia 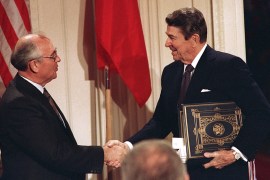 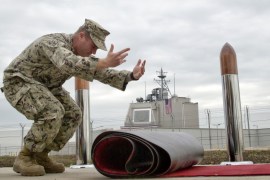 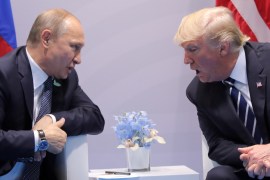