Madrid, Spain – United Nations leaders and delegates kicked off COP25 on Monday in Madrid, launching a two-week summit on climate change with warnings over the fast-rising perils of a global environmental challenge.

“By the end of the coming decade we will be on one of two paths, one of which is sleepwalking past the point of no return,” said UN Secretary-General Antonio Guterres in his opening address.

“Do we want to be remembered as the generation that buried its head in the sand and fiddled as the planet burned?”

The other pathway, Guterres said, was to aim for carbon neutrality by 2050.

“There are calls from young people to do more, much more. They know we need to get on the right path today, not tomorrow, and COP25 offers us an opportunity.”

The required global reduction of carbon emissions has more than doubled from 3.3 percent 10 years ago to seven percent now, he said, while the world was “still waiting for transformative movement from most G20 nations” responsible for three-quarters of carbon emissions.

Hoesung Lee, the chair for the Intergovernmental Panel on Climate Change, said “immediate reductions [of carbon emission] have powerful benefits for all sectors of society.

“The failure to do so will result in the opposite of this, the world will suffer from shredded assets, the financial sector will have greater uncertainty and the environment will suffer from an increased loss of diversity.”

He summed up grimly that “if we stay on our current path, [we] threaten our existence on this planet.”

The conference was planned to take place in Chile, but unrest there saw the location changed after Spain stepped in at short notice. The South American nation continues to preside over the conference.

Speaking later as COP25 President, Ms Schmidt thanked Spain for offering to hold the conference, after original host Chile, beset by ongoing social disorder, requested in late October for it to be moved elsewhere.

Spanish Prime Minister Pedro Sanchez insisted that COP25 “is Chile’s conference” before arguing that “given it was Europe that started the Industrial Revolution, Europe has to lead decarbonisation of the planet”.

Sanchez proposed the creation of a major “Green Pact which unites innovation, digitalisation and fair employment”, and pointed out that “no country however powerful can be protected from the consequences of climate change”.

Overall some 50 world leaders will attend, although one notable absentee will be US President Donald Trump, who last year announced his country’s withdrawal from the 2015 Paris Agreement on Climate Change.

However, Speaker of the US House of Representatives Nancy Pelosi will be present, leading a congressional delegation.

Meanwhile, the Spanish prime minister is expected to hold meetings with other European Union leaders, including French President Emmanuel Macron.

Posters of Chilean landscapes flank the sides of the broad, treelined approach road to IFEMA on Madrid’s eastern side, where 25,000 delegates from nearly 200 countries will try to thrash out deals.

Key meetings will centre on how the landmark 2015 Paris Climate Change Agreement becomes fully operational, in particular mechanisms for trading carbon, as well as the groundwork needed for fresh climate pledges due to be made by all Paris signees before the end of 2020.

“Article 6 [of the Paris agreement] was the outstanding issue not resolved at Katowice” – the Polish city where COP24 was held last November – “and to put a price on carbon is vital,” said Guterres.

“Failure risks fragmenting carbon markets…there is no time to spare.”

Security is tight at the IFEMA centre, with more than 5,000 Spanish police on duty outside the buildings, as well as 450 private agents backing up the UN’s own blue-clad operatives.

Twenty cyclists from the Moving for Climate NOW organisation travelled 500 kilometres (311 miles) to arrive on electric bikes to hand a climate change manifesto to the conference authorities.

Teenage Swedish environmental activist Greta Thunberg, travelling to the conference across the Atlantic Ocean by catamaran, is now expected to land in Lisbon on Tuesday and reach Madrid by train or electric car soon after.

Local media reported she may take part in a large climate change demonstration in the Spanish capital on December 6. 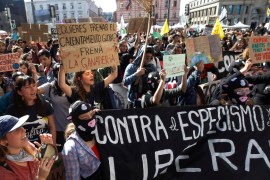 The bully tactics of the powerful can no longer stop a united movement for an equal society and sustainable planet. 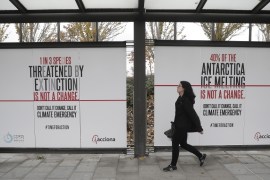 Paris climate deal will be a key issue as some 25,000 delegates convene for the annual UN conference in Madrid. 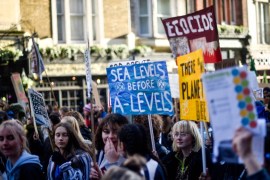 Demonstrations in 2,300 cities in 153 countries attempt to pressure leaders before the UN climate summit in Madrid.