The United States is weighing whether to retain a military presence near oilfields in northeastern Syria in order to prevent the sites falling under the control of the Islamic State of Iraq and the Levant (ISIL, or ISIS) armed group.

US defence chief Mark Esper’s comments on Monday came as American troops crossed into Iraq as part of a withdrawal from northeastern Syria ordered by President Donald Trump, a decision that cleared the way for Turkey to launch a cross-border offensive on October 9 against Kurdish fighters in the region.

The Reuters news agency reported more than 100 vehicles crossed the border into Iraq early on Monday from the northeast tip of Syria, where Turkey agreed to pause its offensive for five days under a ceasefire deal with the Kurdish-led Syrian Democratic Forces (SDF) brokered by Washington.

Speaking to reporters during a trip to Afghanistan, Esper said while the US withdrawal was under way, some troops were still with partner SDF fighters – Washington’s main ground allies in the fight against ISIL- near oilfields and there had been discussions about keeping forces there.

Esper said that was just one option and no decision had been made “with regard to numbers or anything like that”. The Pentagon’s job was to look at different options, he added.

“We presently have troops in a couple of cities that [are] located right near that area,” Esper said. “The purpose is to deny access, specifically revenue to ISIS and any other groups that may want to seek that revenue to enable their own malign activities.”

Trump later told a cabinet meeting in Washington, DC, a “small number” of troops who remained were located in the southeast of the country, while a separate group staying behind had “secured the oil”.

Trump’s shift has opened a new chapter in Syria’s more than eight-year war, raising fears of an ISIL revival and prompting a rush by Turkey as well as Syrian President Bashar al-Assad‘s government and its ally Russia to fill the vacuum left by the US.

Syrian and Russian forces, invited by Kurdish authorities, last week entered the two border cities of Manbij and Kobani vacated by US troops.

Erdogan has backed rebels fighting to remove Assad, but has said Turkey had no problem with Syrian government forces deploying near the border if the YPG militia were removed.

Ankara considers the YPG a “terrorist” group linked to the outlawed Kurdistan Workers’ Party (PKK), based in Turkey.

Marwan Kabalan, director of policy analysis at Doha Institute for Graduate Studies, said it was expected that Washington’s withdrawal would lead to “parties competing for the northeast” of Syria also “fighting for control” of the region’s oil and gas fields.

“The oilfields are not currently operational but they can be restored easily … and whoever controls the oil and gas fields will be generating a lot of money,” Kabalan told Al Jazeera.

“The Syrian regime will need that in order to finance the reconstruction of the country, or part of that at least, whereas the Kurds will want to keep control of the oil and gas fields because its really important for them if they want to establish any form of autonomous rule in the northeast of Syria,” he added.

“Of course, Turkey would not allow that and would also get into this fray and try also to control the oil and gasfields.”

Under the ceasefire deal, Ankara agreed to give the Kurdish forces 120 hours to withdraw from a so-called “safe zone” that Erdogan wants to establish along Syria’s border with Turkey. The agreement did not specify the area of the pullback.

Erdogan on Sunday said he expected the US to keep its promises and not use stalling tactics over the agreement brokered between the NATO allies, warning Turkey would resume its military operation if the deal faltered.

He had previously said the offensive will resume if the withdrawal is not completed within the five-day time window set out by the truce agreement.

On Sunday, the SDF said they had withdrawn from the border town of Ras al-Ain under the ceasefire deal, but a spokesman for Turkish-backed Syrian rebels said the withdrawal was not yet complete.

Erdogan has also said Turkey will set up a dozen observation posts in the “safe zone”, prompting criticism from Iran.

“The issues should be resolved by diplomatic means … Syria’s integrity should be respected,” said Mousavi, whose country is a staunch ally of al-Assad.

Echoing such concerns, Kremlin aide Yuri Ushakov said Russia believed long-term regional security could only be achieved by restoring Syrian unity and also by taking into account the interests of all the country’s ethnic and religious groups, Reuters reported.

He reiterated that Russian President Vladimir Putin and Erdogan would discuss Turkey’s military offensive during scheduled talks on Tuesday in the Russian Black Sea resort of Sochi.

Turkey’s operation has displaced hundreds of thousands of people, with the fighting also sparking fears that the SDF, holding large swaths of northern Syria previously controlled by ISIL, would be unable to keep thousands of suspected members of the armed group in jail and tens of thousands of their family members in camps. 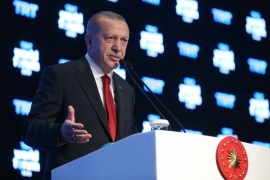 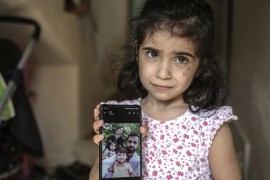