After more than a week of soaring temperatures, the searing heatwave across New Zealand is about to come to an end. This is likely to be the country’s hottest month on record.

Over the past 10 days, some areas of the country have seen the mercury exceed 30 degrees Celsius.

The hot winds have blown in from southeastern Australia where highs have reached the low 40s Celsius at times. Temperatures in Adelaide and Melbourne are now nearer the low 20s.

The extreme temperatures in New Zealand have been at their highest on the eastern side of the country due to a process known as the Foehn effect.

Air cools with height and conversely warms up on descent. The Foehn effect is where air dries out and warms up as it passes onto the sheltered downslope of a mountain range.

Wednesday was the last hot day of the spell and also one of the hottest days of the year. Temperatures along the east coast of the South Island again passed 30C with inland areas nudging 40C.

Waiau Hamner in the Canterbury region reached 36.4C by 1400 local time on Wednesday.

This followed a high of 36.6C in Cromwell on Tuesday, equalling its hottest ever January temperature since records began.

We still have some way to go to reach the hottest day on record. That was February 7, 1973, when northern and eastern regions of the South Island experienced a high of 42.4C in Rangiora. Nine out 10 of the country’s highest temperatures were recorded that day.

The next few days will see a dramatic change in conditions with the remnants of Tropical Cyclone Fehi barreling towards the country. At the same time, a weather front is sliding across the Tasman Sea towards the South Island.

The two systems are expected to merge and could cause widespread flooding. Authorities are concerned that they might even bring a repeat of the severe floods of 1984.

Tropical Cyclone Fehi formed near New Caledonia at the start of the week and has been steadily drifting south. It will have weakened significantly by the time it crosses New Zealand.

Nevertheless, the country’s Met Service has issued severe weather warnings for heavy rain and strong to gale force winds for much of the South Island and lower parts of the North Island.

The heaviest downpours are expected on Thursday with western parts of the South Island getting 200 to 400mm of rain. East of the Southern Alps can expect 50 to 100mm. Damaging winds are also likely, Gusts of 129 to 130 kilometres per hour could also add to the dangerous conditions.

Quieter weather is forecast by the weekend as the rain clears through and winds ease down. It will feel much fresher, and indeed more comfortable by then, with temperatures nearer the high teens or low 20s Celsius. There might even be a dusting of snow on the hills. 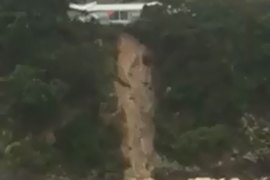 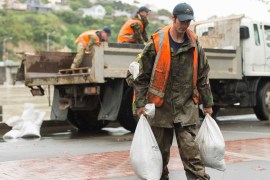 New Zealand braced for next bout of flooding rain

Remnants of Cyclone Cook expected to bring torrential rain and damaging winds to the North Island.